To my surprise, the Xinjiang Summer has a lot in common with the Turkish Winter. It’s a bit like looking at the negative of a familiar photograph. The features and contours and details are all the same, yet the whole thing’s a completely different colour. The highway I’m following through the Taklamakan Desert is strikingly similar to the one I followed through the mountains of eastern Turkey. It’s generously wide, comfortably smooth, and has plenty of space for cyclists, alongside the constant procession of lorries. It rolls up and down over measly and unforgiving gradients (they look like nothing, but are actually really hard work for little reward – give me a nice honest set of steep switchbacks any day). There’s usually an evil headwind. The surrounding landscape is strikingly beautiful, but also sparsely populated. Towns, villages, shops and petrol stations are few and far between, and often non-existent.

And the heat here is actually frightening, just as the cold was in Turkey, by which I mean that, on top of all the usual discomforts of extremes of temperature (cold toes in winter, dehydration in summer), I occasionally fear that I might be doing myself serious or permanent damage. I had never experienced cold like I did the day I rode into Erzurum, or the day I rode from Soltaniye to Shirin Su in Iran. It was actively painful. My lungs burned and my skin stung. I worried about frostbite, and had to constantly remind myself that people have cycled through colder temperatures and survived. I come from a temperate little island, where the weather, although we all complain about it, is generally quite a benign force. I was awed to be experiencing weather that could actually kill me if I wasn’t careful.

So, I’ve been riding along sweating and burning, as is always the case in the summer. But there’s the same edge of fear I felt as I raced the sunset to Erzurum last January. The Taklamakan Desert is a cruel place. Over the past few days I have often ridden for several hours without any shade – sometimes the square metre provided by a signpost is all I’ll see for miles, and there aren’t even that many signposts out here. My skin is burnt deep brown and blistering and peeling like paint in a housefire. The headwind, although horrible, sometimes cools me down a bit, but yesterday it was so hot that the air licking against my skin felt like flames. It is shockingly, frighteningly hot.

But, just as happened in Turkey, I am being looked after by people I meet along the way. The lorry drivers who stuffed me and Sun (my roadie friend) with watermelon must surely be the spiritual cousins of the two who flagged me down on my way up the frozen Tepebasi Gecidi pass in Turkey, and cooked me an omelette for my breakfast (and the kind lorry driver in Zanjan, who invited me, Ben and Johannes to his house for lunch). 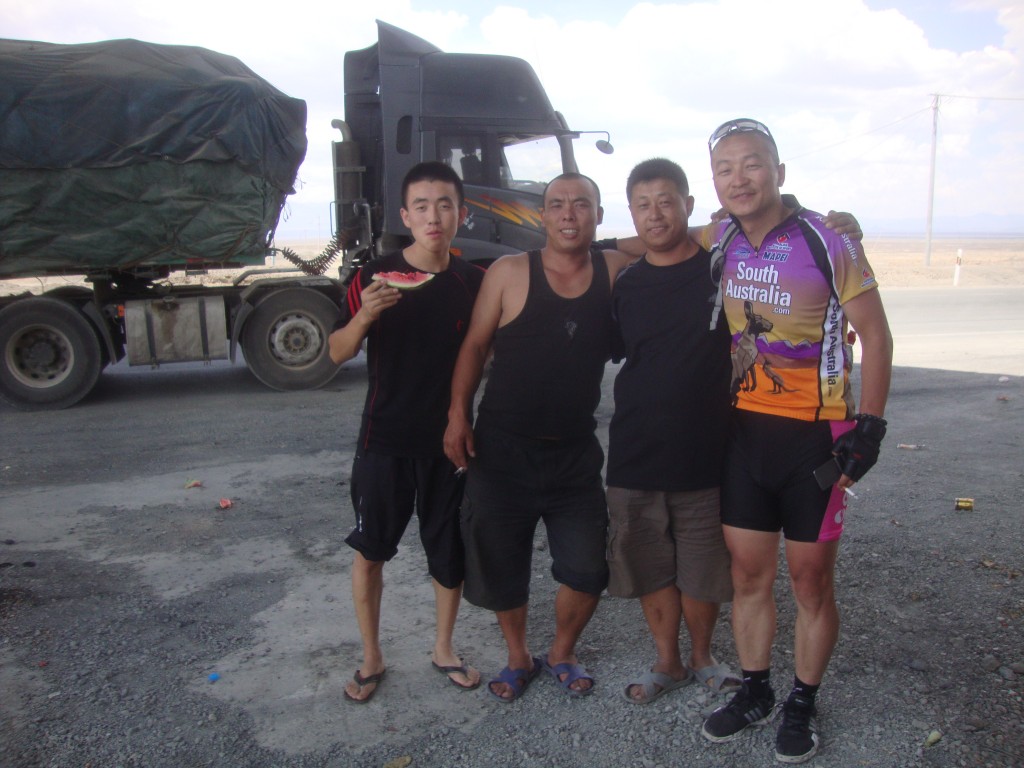 The other day I stopped in a layby in the middle of nowhere, planning to have a short siesta in the shadow of a truck that was parked there. There was a small, unpromising hut a few metres back from the road, which turned out to house a rudimentary transport cafe, run by a couple of grinning men who were passing the time of day with beers and conversation, and seemed delighted that I had turned up. 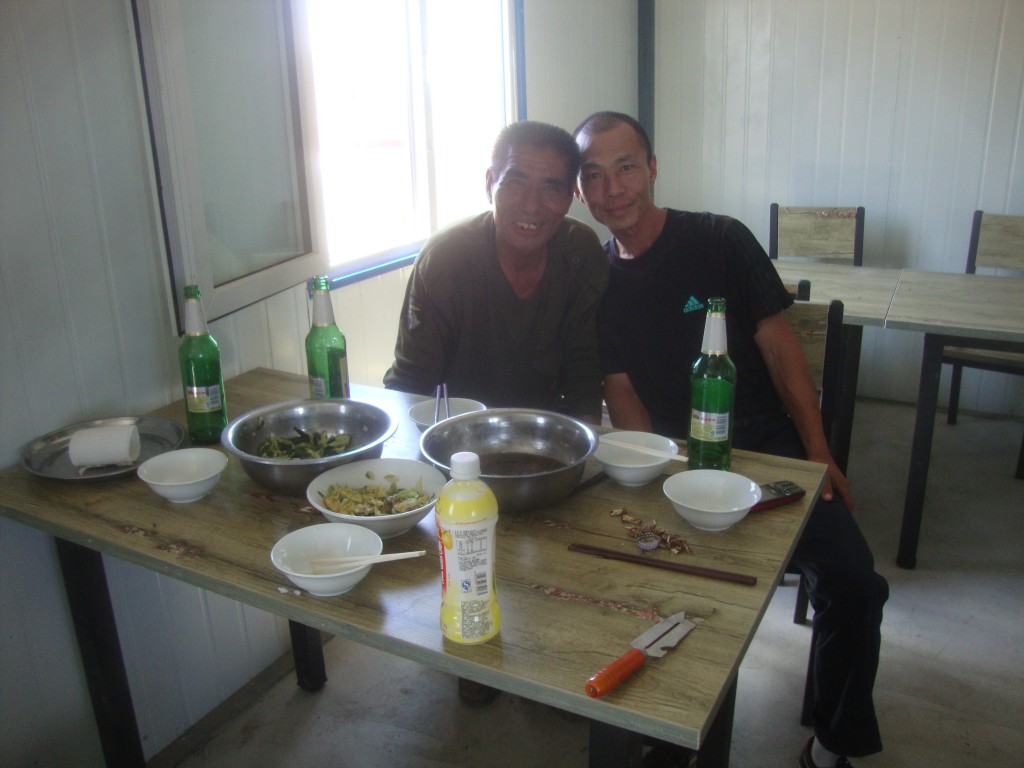 They plied me with eight – eight! – bottles of chilled iced tea (the first I’d had in a long long time), gave me lunch, and then protested, in hilarious and flamboyant sign language, that it was far too hot for me to carry on riding now, and that I should wait there with them, and rest until the sun was lower. They made me up a bed on one of the tables, made sure I was comfortable, and then carried on drinking beer. I had a three-hour snooze, and then went on my way. It helped no end. 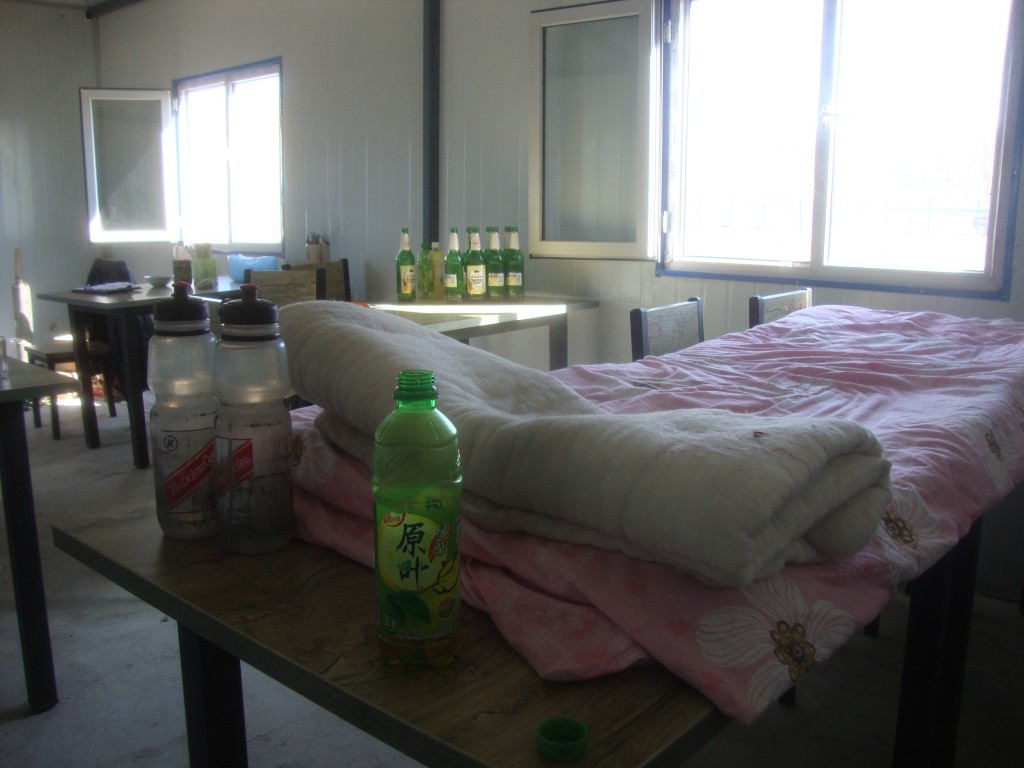 There have been many others – too many to recount them all here. Yesterday I stopped for a break under a bridge (oh, rare and blessed shade!) and found a family selling apricots, who plied me with fruit and watched over me while I had another snooze. The night before I’d been treated to a banquet at a truck stop, where they also let me sleep in a dorm room and refused to take any money. Almost everywhere I stop, someone will hand me a slice or two of watermelon, or a bottle of water.

It’s been a tough week, and I can’t (won’t) pretend otherwise. But, as well as all the support I’ve received from locals, I’ve been constantly boosted by notes, messages and emails from people who aren’t with me, but sometimes feel like they might as well be. One of the young men who escorted me out of Urumqi has been texting me every day, to check I’m OK, and to remind me that people in Urumqi are thinking of me. There’s the daily lifeline to my father (the Routemaster), and the conversations I’ve struck up with people via my website (some I’ve met in real life; some I haven’t). There’s the small handful of handwritten letters from friends that I keep in one of my panniers, and sometimes read through when times are hard. And a couple of days ago, something truly amazing happened.

It had been a very hard day, and by the end of it I was struggling along into the headwind, barely above walking pace, and so exhausted that I was having to stop and rest every 5km. Everything hurt, nothing more than my pride. Rarely have I felt less heroic. At one point I stopped, got off the bike and sat beside the road for a long time, thinking about how impossible it felt to go on like this. I had been planning to spend the night at the service station I’d convinced myself (on no evidence at all) must be just 30 or 40km along the road, but at 7.30pm I spotted a tiny, rundown homestead beside the road, the first sign of human habitation I’d seen for a long while, and decided to stop for the night, fighting off a dismal sense of failure. 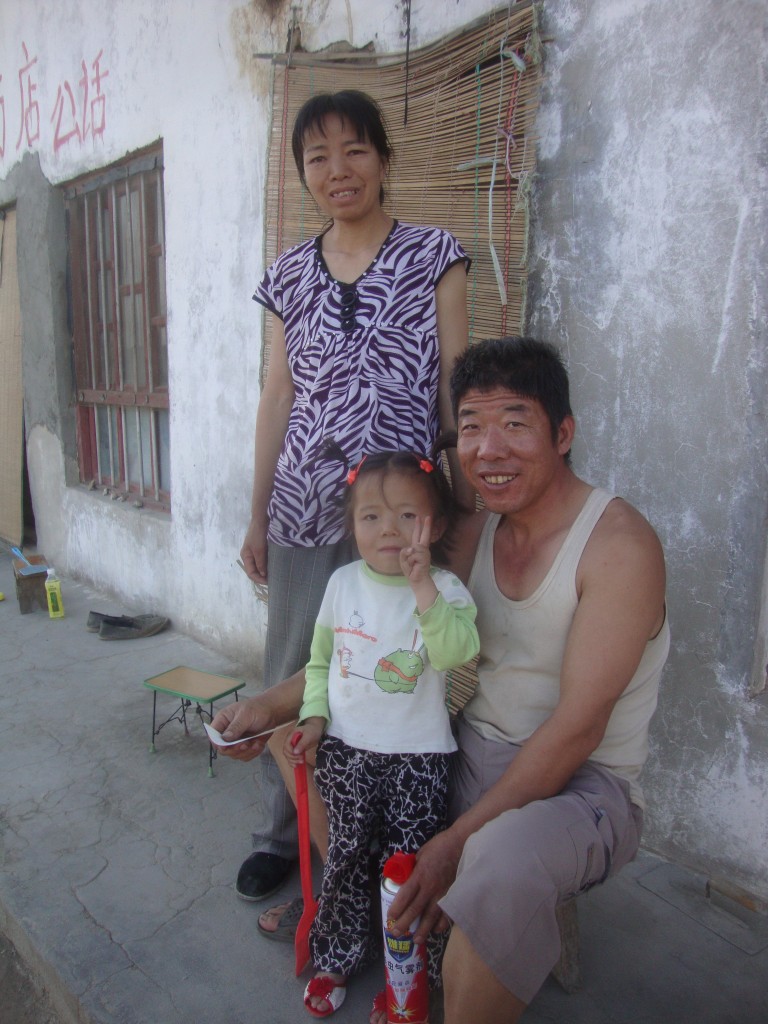 The family who lived there were friendly, and when I asked if I could camp, they ushered me into a small room with a brick floor, containing five tractor tyres and a pallet bed, and helped me wheel my bike over the threshold and prop it up against one wall. I flopped onto the bed and sent my father a brief email, reporting the day’s pathetic mileage and telling him how miserable I felt.

A few minutes later, my hosts reappeared with a handful of paper. It turns out I wasn’t the first cyclist they’d seen over the years. There was a handwritten note from a Frenchman called Joseph Capeille, who passed by in 2004 on his fifth world tour, there was a business card from Ken Roberts, a fellow round-the-worlder, with whom I’ve made friends by email (and discovered a couple of improbable real life connections), and best of all, there was a note and a passport photo from Sarah Outen, who had been there almost exactly a year ago. The effect was the same as if I’d unexpectedly run into a familiar face in the middle of a foreign country. I suppose, in effect, I had. It felt like a sign and, at that moment, as if each of them had written me a personal note of encouragement. 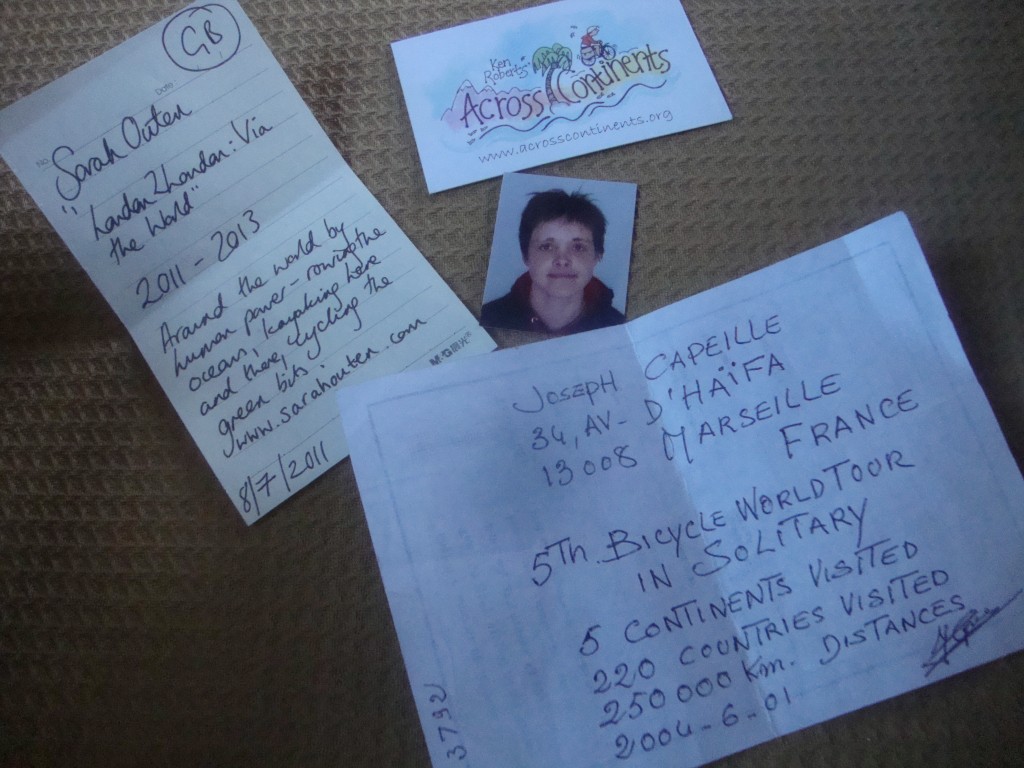 Of course, I added my own note to the collection. Who knows, perhaps next year, or the year after, some other exhausted and despondent round-the-world cyclist will stop here, unable to push herself any further, and will be boosted and reassured by seeing that other cyclists were there before her. And I wonder where I’ll be by then.