Posted in off the road

Warning: we recommend not staying in Urumqi as it is just a huge blob of an urban megalopolis with no redeeming features.

So said the father of a friend, who backpacked through Central Asia and Western China last year, and has been giving me invaluable advice about the road ahead.

But, as is sometimes the case, my experience of the city has been completely different from his. True, it’s a brand new metropolis, mostly built within the last ten years, so doesn’t boast the historical and mythological riches of places like Kashgar and Hotan (on the Southern Silk Road, which I didn’t take), but there’s always more to a city than old buildings and tall tales.

Much to my surprise, since I’m a country bumpkin by upbringing, I find I enjoy cities as much as I do the mountains and deserts in between them. This is almost certainly due to my years as a cycle courier, during which I opened London up like the back of a pocket watch, and never got bored of watching all its secret inner mechanisms and behind-the-scenes cogs and springs and wheels, ticking along like – well, like clockwork. A city is where people live and work and play together, and people are always fascinating. Often far more so than the archaeological ruins the guidebook tells us to go and look at.

Urumqi’s particularly interesting because of the cultural admixture of Han and Uyghur (not always easy bedfellows, as demonstrated by the 2009 riots, although I’ve seen little evidence of any discord today, and get the impression that, as in Pakistan, most people just want to get on with their lives, and a belligerent minority are the brush that the rest are tarred with), but my personal anthropological microscope tends not to observe such niceties. I’ve just enjoyed the people-watching. I’m still recalibrating my proprieties after Iran and Pakistan, so for the moment I’m still rather struck by what people are wearing. Chinese women are, at least to my untrained eyes, extraordinarily well-dressed – although that could just be because I’m living on top of a shopping mall in the city centre, so only seeing a certain section of the population. They’re immaculately attired in dainty little summer dresses, well-tailored cotton, or floating chiffon with pleats and ruffles aplenty, and have perfect hair and coordinated shoes and handbags. It’s as if I’ve wandered onto the set of Sex And The City – or at least a low-rent and very convincing Chinese rip-off of the same.

In fact, Urumqi is rather like a poor woman’s New York. As my architect host pointed out, there is very little aesthetic merit to any of the brand new skyscrapers that bristle on either side of a seething highway, which runs through the middle of town like a river. But that didn’t really make any different the other night, when we stood around a barbeque on the roof of one of them under glowing late-afternoon sunlight, and then watched the sky fade to pink and orange and finally indigo as sun set behind the hills and the city light up around us. Down below, the streets are lined with trees, and the headwind I fought to get here is no more than a gentle breeze. 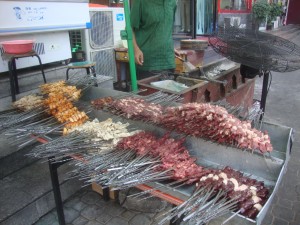 And the barbeque itself was probably better than many that New York, or most other cities of the world would have to offer. If there’s one thing Urumqi does exceedingly well, it’s food. It could be something to do with the fact that it’s a city of migrants (from the east coast Han Chinese to international incomers as diverse as Maltese and Texans). Or it could be because it’s in the middle of one of the best fruit-growing regions on the planet. Xinjiang produces the ingredients for most of the world’s tomato ketchup, and also the most delicious melons I’ve ever tasted. And on every street corner there are barrows piled high with ripe peaches, cherries, apricots, mangoes and bananas. Every meal is bookended with large piles of succulent fruit, and accompanied by a plethora of salads and side dishes. After a fortnight of dry bread and instant noodles, I’m in heaven. 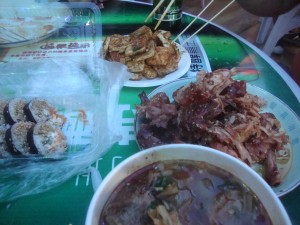 And, given the inevitably inadequate diet of the long-distance cyclist, I’ve been revelling in the sheer quantity of food that Urumqi has to offer. Generous people have been taking me out to eat all over the place (I even ended up gatecrashing someone’s wedding), and the food just keeps coming. Waiters will pile the table with food, and I’ll eat my fill, and then as soon as we’ve made some space, they’ll bring out more. And it’s all delicious – vegetables aplenty, every sort of meat and fish you can imagine (I’ve even encountered pork products for the first time since I don’t know when!), and noodles and rice and dumplings and bread. I’ve enjoyed the hearty, meaty, oniony pilafs and kebabs of the Uyghurs, and the fiery chicken feet and tofu of Szechuan cuisine, and even some long-lost cousins of Japanese sushi. I’m hoping this magnificence will continue as I head east, into China proper, but just in case it doesn’t, I’m making the most of it now. 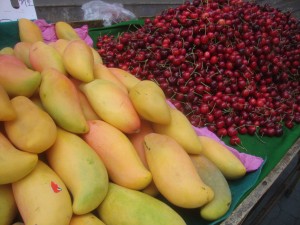 You’ll probably never get to Urumqi. Like Nantwich, and Kırşehir and Gorizia, it doesn’t have enough to recommend it as a holiday destination in itself, so you’d only ever end up there if you happened to pass by on your way to somewhere else. And that’s unlikely to happen – Urumqi is notoriously remote: the furthest city from any sea in the world, and the closest major city to the Eurasian pole of inaccessibility. But if you do, you’ll at least be well fed. 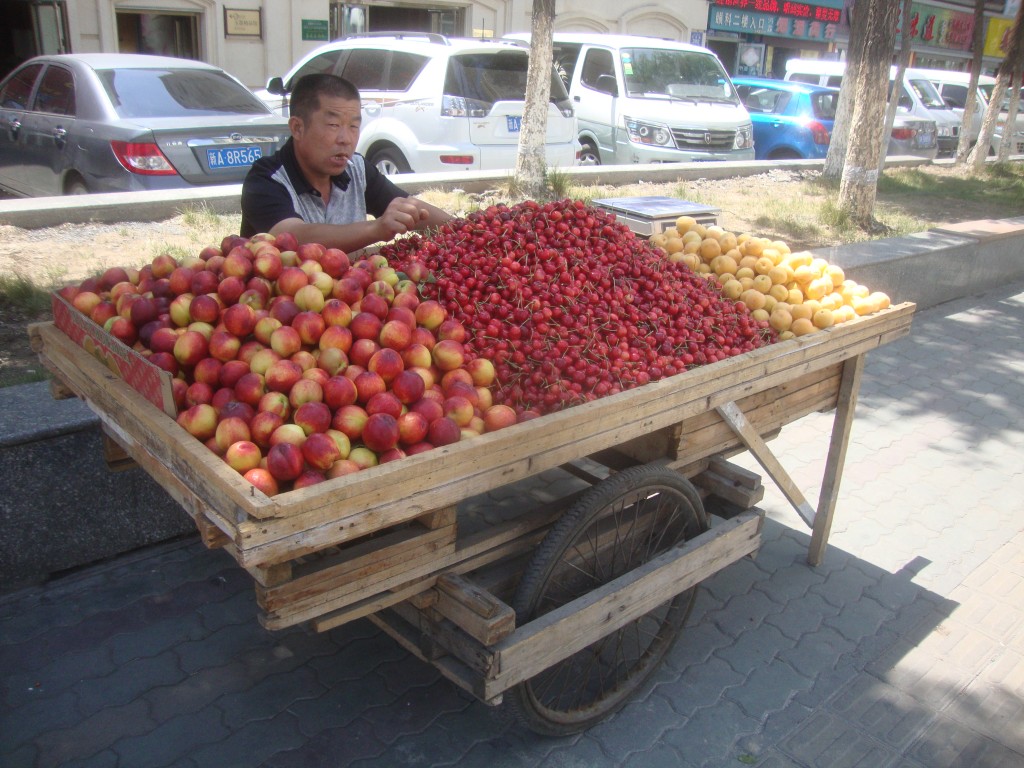 Previous Article Any questions?
Next Article Other people