It’s nine months to the day since I started this adventure, and I find myself in Kashgar, China’s westernmost city, at the end of the Karakorum Highway. For years it’s been my dream to ride this road, and climb the 4695m Khunjerab Pass, and I’m still not quite sure how to feel now that I’ve actually accomplished it.

The “warm, happy, sleepy, triumphant glow” that I felt when I reached the end of the Turkish winter (little realizing that the Iranian winter would be just as cold), and which normally accompanies my arrival at some long-anticipated destination, was almost entirely absent the night I arrived in Kashgar. And since then I’ve been repeatedly reminding myself that I just cycled the Karakorum Highway, and that I climbed the Khunjerab Pass, trying desperately to impress upon my reluctant brain the magnitude of this achievement. It still hasn’t sunk in, perhaps for the simple reason that something this eagerly awaited will always turn out to be a bit of a disappointment.

Oh, but I wouldn’t call it that! Although it hasn’t made any noticeable impression on my (probably already over-inflated) ego, the Karakorum Highway exceeded all other expectations, mainly because it was just so – difficult.

You think I’m a fool, I’m sure, for not realizing that riding across one of the world’s greatest mountain ranges would be quite hard work. I knew it would be. But I’ve ridden up mountains before. I rather like it. It’s sweaty, breathless and exhausting, but you just keep pushing, keep on going up, and eventually you get to the top, and the view’s amazing. I couldn’t imagine the Karakorum Highway would be much different, except that it might go on for a bit longer, and I might get a bit more breathless towards the end.

I was wrong. The KKH was one of the most difficult rides of my life. I no longer feel any guilt over taking the bus up to Gilgit (well, I suppose I’ll always feel a little), because the upper stretches of the road more than made up for it.

You know I mentioned the road was a little uneven after Gilgit? It got worse. 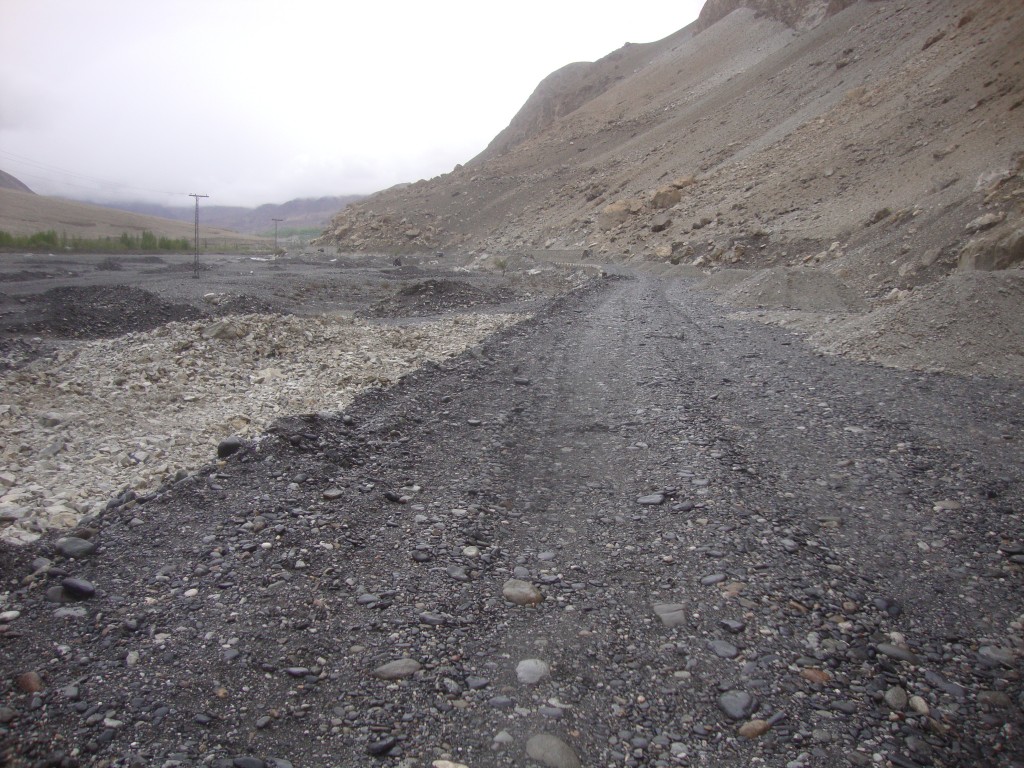 The road seemed to have been designed by a sadist, who had given particular thought to what sort of terrain would prove most challenging (and infuriating) to cyclists. Sometimes it was made up of loose stones, constantly slipping and sliding and shifting and rattling under my too-thin tyres, so that the bike lurched from side to side, and sometimes swerved inadvertently as the rocks shifted under its wheels. 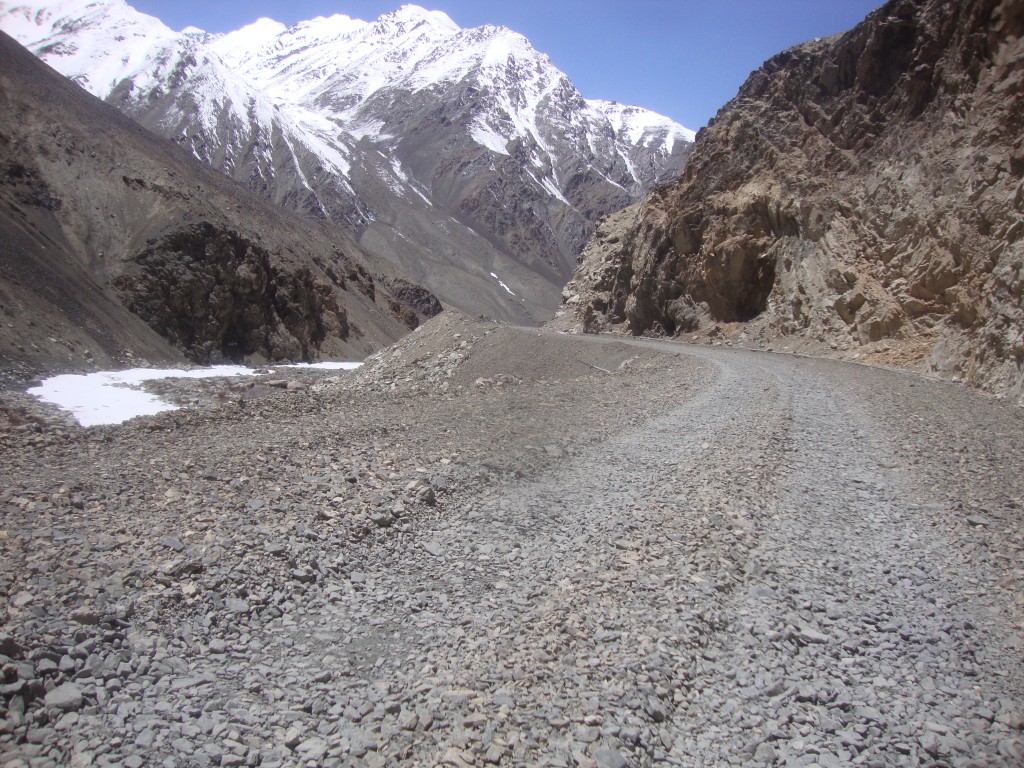 Sometimes I’d be riding across hard packed soil, which was slightly easier, but generally had loads of rocks sticking out of it, so that the bike was constantly bump-bump-bumping along, my panniers jolting and juddering noisily until I worried the screws would work loose on my racks, and my barbag bouncing up and down so that I feared it would crack the plastic on its klikfix mount. For certain stretches of the road, whatever large vehicle had been employed to flatten it had actually left it neatly corrugated, so that cycling over it felt very much like riding over railway sleepers. It was impossible to make any fast progress, even on the downhill sections, and I was constantly switching from one side of road to the other, trying in vain to find a smooth section.

And then there was the dust. In places the road had been buried under landslides (natural or manmade), and where the rocks had been cleared there was generally a layer of dust and sand, often inches deep, which presented one of the most challenging terrains I’ve ever ridden over. In fact, sections of the road were completely unrideable – notably the site of the 2010 landslide, which created an enormous natural dam, flooding the valley above it to create the Attabad Lake. The Chinese have ambitious (and imminent) plans to blast through the dam and drain the lake, but in the meantime there’s a steep track leading up and over the top, to a small temporary harbour, where a flotilla of brightly coloured wooden boats waits to transport passengers, livestock, supplies and vehicles across the water to the stranded villages above.

It was impossible to ride my bicycle up this track. In fact, it was almost impossible even to push it. Have you ever tried running up a sand dune? My feet, as well as the tyres, were constantly sliding backwards, unable to get a grip, and the weight of my front panniers continually dragged the bike sideways, meaning that I had to give as much strength to keeping it straight and upright as I did to hauling it up the hill. The sand sucked at my wheels, and it felt as if someone were maliciously hanging onto my rear rack, trying to hold me back. Sometimes I’d grasp the seatpost and try pushing instead of pulling, but that was no easier. I had to stop and rest every few minutes, and it took a long long time to wrestle and pant and heave my way to the top.

But when I did, the view was worth it – a cool blue gem, set amongst the harsh brown rock faces of the Karakorum. 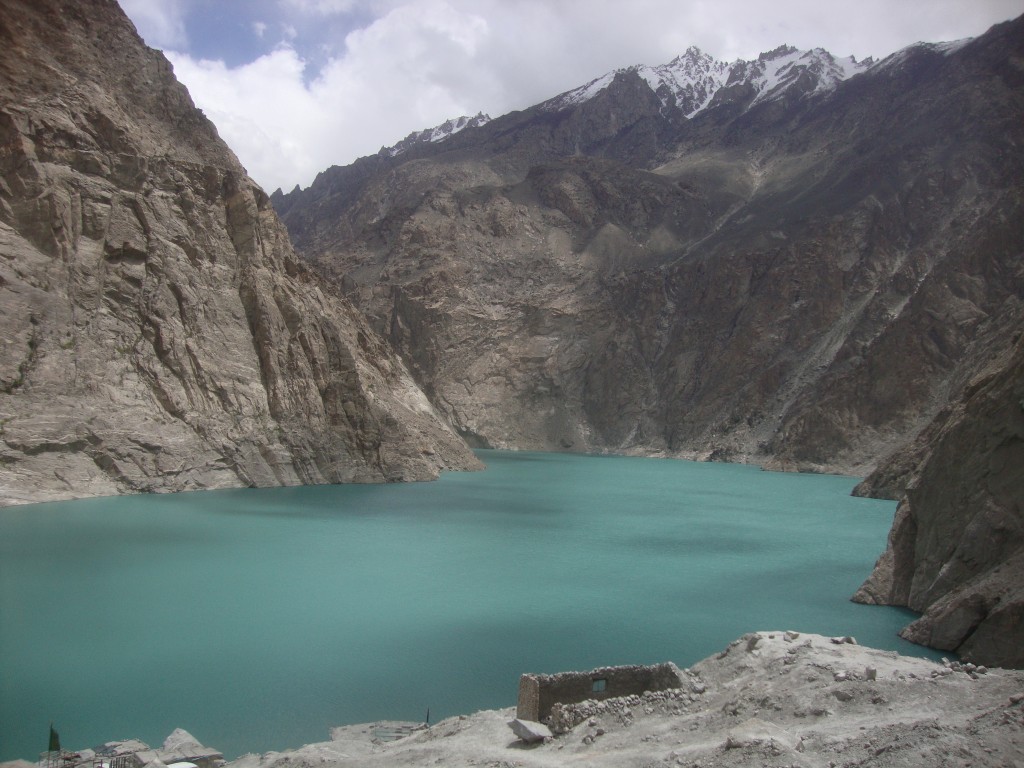