My friends in Tok

I had a long way to ride after leaving Chistochina, but I was fresh and energetic after a few days off the bike (and a handful of hearty meals), and within an hour or so decided that I would try and push on to the home of John Rusyniak, a tall grey-haired gentleman I’d met very briefly among the crowds of the dog race, and who, Richard and Judy later told me, had invited me to come and stay at his own lodge, about 70 miles up the road, if I could make it that far in a day.

“He’s got a lovely place there,” remarked Richard. “I’d try and make it that far if I were you.”

John Rusyniak’s lodge didn’t quite fit in with my route plans. From Chistochina it was about 100 miles to Tok, where the road up from Glennallen joins the Alaska Highway and turns south, towards the Canadian border, and it made more sense to me to attempt this in two 50-mile days, camping somewhere around the halfway mark, rather than splitting it into a gruelling 70 and a puny 30.

But I remembered my oft-repeated vow never to to turn down an invitation if I can help it, and thought how much nicer it would be to spend that night in a warm dry bed than shivering in my tent by the side of the road, and pressed on through the vast monochrome landscape, along the broad, endless avenues of spruce trees and snow, pausing every hour or so to do battle with one of the frozen peanut-butter-and-nutella sandwiches I’d filled my pockets with before I left Chistochina.

And I made it, even though it was long after dark, and about ten miles further than I thought it would be. I always feel a slight sense of panic as the light begins to fade around me, and I realize that I won’t reach my destination before darkness falls, but after half an hour or so, this usually transmutes into a calm surge of energy. I remember that I love riding in the dark, and that it feels swifter, and quieter, and more concentrated, undisturbed as it is by all the things that might be going on around me in the daylight. (Not that there is ever very much going on along the Tok Cutoff.) And I realize that now it is dark, there’s no longer any particular hurry to get to where I’m going, and I could just carry on all night if I wanted to. The signpost for Rusyniak’s lodge failed to materialize, and I began to wonder if perhaps I’d sped right past it. But it didn’t really matter if I had, I reasoned to myself. I wasn’t at all sleepy, and it was only another 30 miles to Tok, and the road was smooth and crisp and even, and I’d only passed 35 vehicles that entire day.

But eventually the signpost loomed to my left, many miles after I’d expected to see it, and I followed a snowy track up a slight bank and two miles off into the trees, watching the featureless white stripe winding off into the forest ahead of me, occasionally covering up my front light with my hand, hoping to see the lights of whatever house or homestead I was headed for twinkling through the trees. But for a long time there was nothing but the snow and the forest and the quiet crunch of my tyres. And then, quite suddenly, the trees opened up to my right, and I rode out into several acres of wide open space, cradled in the bowl of the snowy mountains that surrounded it, fringed with tall trees and a scattering of cabins, and with an enormous log-built mansion nestling in the centre of the clearing, like a jewel in a crown, its windows glowing out into the huge black silence of the Alaskan night.

I had been worried that the Rusyniaks would be worried about me, knowing that I was leaving Chistochina that day, and fearing for my safety when I didn’t turn up at their place before nightfall. But my arrival turned out to be a surprise. They had just come in from a day’s skiing, and were settling down for a cosy evening at home when their enormous dog, Yukon (the likes of whom I hadn’t seen encountered since the vicious hounds of Eastern Turkey) noisily alerted them to my arrival.

It was immediately apparent that John and Jill had several decades’ experience of welcoming guests to their home. (Before they set up their lodge in 2004, they ran a very successful B&B up the road in Tok.) I was swiftly installed in a warm bedroom, pointed towards the bathroom, and told to come upstairs for a bowl of hot soup whenever I was ready. But what was even more exciting was the absolutely enormous workshop John wheeled my bike into, after enquiring anxiously whether it would prefer to be in the slightly warmer room where the generator lived. All along the walls were shelves and tool benches, lined with every possible implement and substance you could want to keep your car, jeep, tractor, snowplough or bicycle on the road. And, to my great surprise, hanging from the cavernous ceiling was a recumbent tandem, on which John and Jill had toured California a few years previously.

“Oh yes, you’ve found the closest thing to a bike shop between Anchorage and Whitehorse” he laughed. Back when his kids were still at home, and they all lived in Tok, he had registered himself as a Trek dealer, simply so that he could get cost-price bike parts for him and his family, and since Tok had no other bike shop, he soon ended up as the town’s unofficial bicycle repair man. That had all ended now, but he still had a shelf or two full of leftover odds and ends and tools and spares and anything he hadn’t yet managed to sell on Ebay. The following morning, after I’d recounted the depressing litany of my lost and broken lights, he produced a pair of cheap-and-flashy rear lights (just the sort I like) and, eagerly scanning my bicycle for anything else he might be able to help with, eventually remembered a very sophisticated Niterider lighting system which, he assured me, had been sitting unused on his old mountain bike for over a decade and, with the help of bungees and velcro straps, was soon affixed to mine, effectively doubling my illumination capacity.

I only had thirty miles to ride the following day, so I hung around for a long and leisurely breakfast (blueberry pancakes smothered in butter, peanut butter and maple syrup; fresh fruit; caribou sausage), admiring the stuffed animals prowling around on the beams above my head (my favourite was an enormous silvery wolf), and leafing (with increasing awe) through the picture book that John and Jill had put together showing the construction of their beautiful home.

“Did you build it yourselves?” I had asked the previous evening; a question which, where I come from, means ‘did you hire an architect and some builders to put it together, or did you just buy it second-hand?’. The Rusyniaks, it turned out actually built their house, with the help of a revolving workforce of family and friends. The earliest photos in the book showed them wandering through a pine forest, selecting the exact trees they wanted to make up walls and roof, and then, page by page, I watched the timbers being cut, carved, treated, and finally slotted into place and sealed against the elements. What had comparatively recently been a concrete pit and a pile of logs was now an enormous off-grid palace, heated by an enormous furnace, powered by a generator and a solar panel, and supplied with water by a private well with a heated pipe running underground to stop it from freezing when the temperature drops to -50 – as it regularly does in Tok, the coldest inhabited place in the world.

“So where are you staying when you get to Tok?” asked Jill. I told her about Rion and Rebekah, the friendly couple I’d contacted through Couchsurfing. She laughed. “Rion and Rebecca? Oh yes, we know them – they go to our church! In fact, they got married right here at the lodge. Her hair’s bright red at the moment.”

John got out his phone, and showed me a picture of a handsome young couple – the woman’s hair was, indeed, bright red.

Since he had his phone out John decided he might as well call Rebekah, to let them know that they had me in their possession, were feeding me and chatting with me, and would release me shortly. I left their house an hour or so later, after John and Jill had taken turns on my fatbike, with the agreeable sense of being passed from friend to friend.

A couple of days later John sent me an email with some of the photos he’d taken during my stay, and told me how much they had enjoyed having me there. “God has been good to us and we love to share what we have with others” he wrote. It was a sentiment I’d hear again and again – with and without God – all the way to the end of the ride. 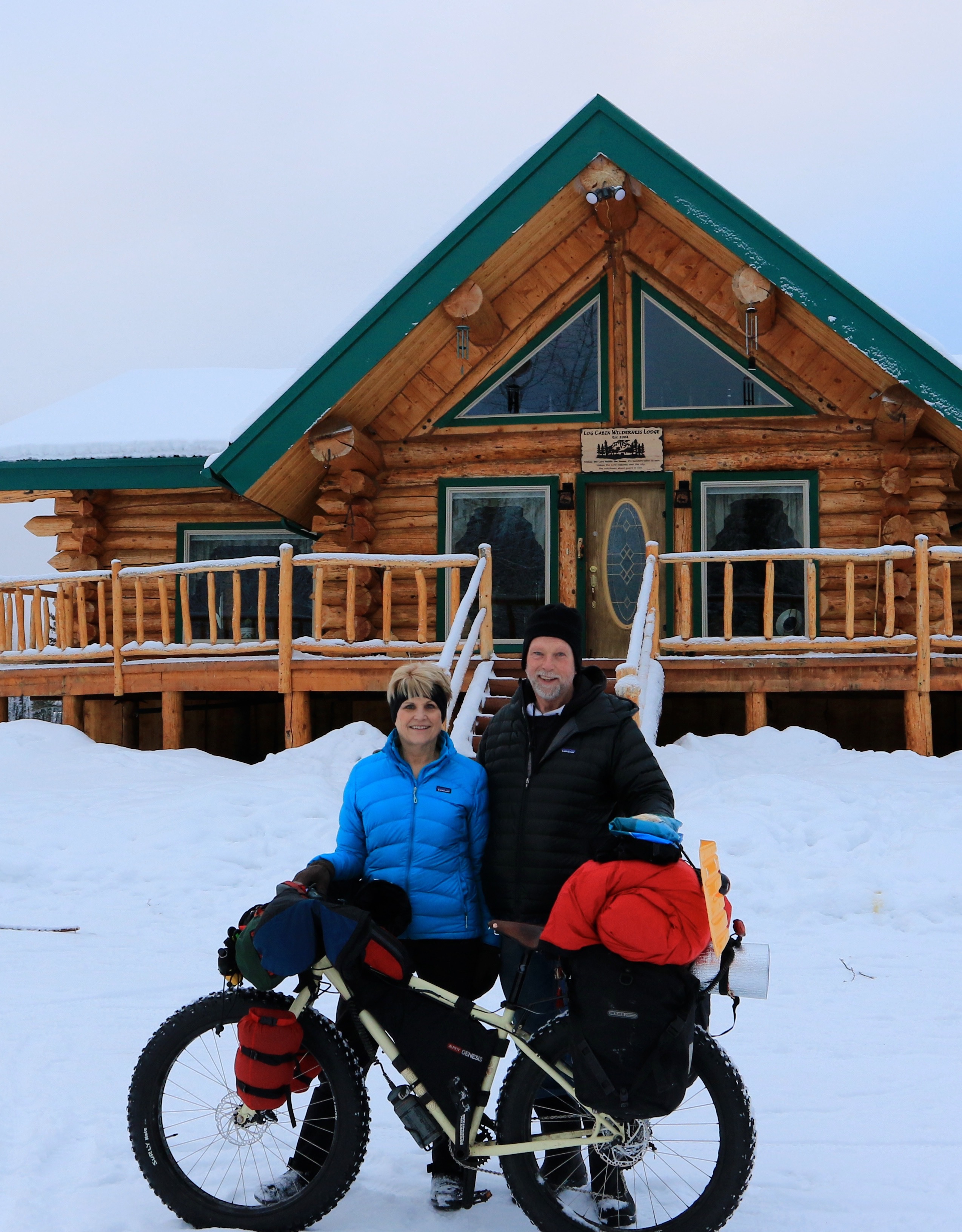