You won’t mind if I’m not strictly chronological about this, will you, dear readers?

The problem is, the rhythms of cycle touring are such that one generally has a lot more to report than one has the time, energy or internet access to record. So I’ve fallen a long way behind with all the major events of my trip that I’d intended to blog about. And then, of course, every day one or two minor but interesting occurrences dominate my attention – occurrences that by the time I come to write about them weeks down the line, I’ll either have forgotten or deemed sufficiently irrelevant that they get edged out of the main flow of the narrative (such as it is).

I’m currently in Stewart, a tiny town on the fissured coast of British Columbia, just a couple of miles from the narrow tongue of Alaskan land that extends down through the islands and inlets of the Pacific seaboard. The other day I walked along the coast and across the border to Hyder, an even smaller town, which seems to be populated mainly by eccentric souvenir shop owners and aging draft dodgers. My Canadian host paints it as a village of oddballs, who take advantage of the 24-hour daylight in summer to grow forests of marijuana, and scramble up the nearby mountainside to cross the Canadian border on the rare occasions when the State Troopers fly in. A Hyder resident told me: “We all got guns – we take care of our own affairs up here.”

I got here by taking a 66km detour through the mountains from the remote Cassiar Highway – itself a detour from the main Alaska Highway, but one I’m very glad I took. Since the teething troubles I described in my last few blog posts, I’ve grown to love the silence and solitude of the frozen north, and am now mildly dismayed that, as I edge further south, the weather will warm up and the spaces between towns will shrink. It will be slightly magical to rediscover civilization, and to stop and drink coffee at gas stations as if it’s nothing (rather than spending the first ten minutes profusely thanking the owners for being open, because this is the first time in two days I’ve encountered human company and an ambient temperature above -30), but I know it will be a long time before I get another chance to lose myself and my mind in the great white sparkling bubble of winter, to watch an icy road winding away through the spruce trees and into the mountains ahead of me, to hear my tyres roaring through the crusted snow at the edge of the shoulder, and to know the satisfaction of having somehow managed to put real life aside for a time, and retreat into my own world. 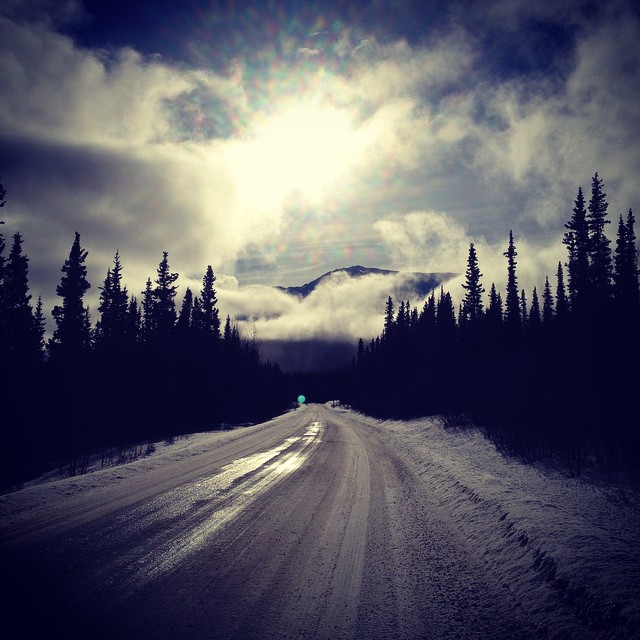 Stewart is a beautiful place. From both sides of the large sunny house I’m currently sitting in, I can see near-vertical rock faces, laden with snow higher up, and speckled with precarious-looking pine trees further down. And yet, despite being hemmed in by mountains, the town manages to be full of light, and its small clapboard houses are blue and green and red, and look (to me at least) vaguely Scandinavian. If I walk to the edge of town, I’ll reach the head of the 70-mile Portland Canal (one side of it American, the other Canadian) and far away at the end of that is the Pacific, across which ships carry Canadian logs to Chinese sawmills. 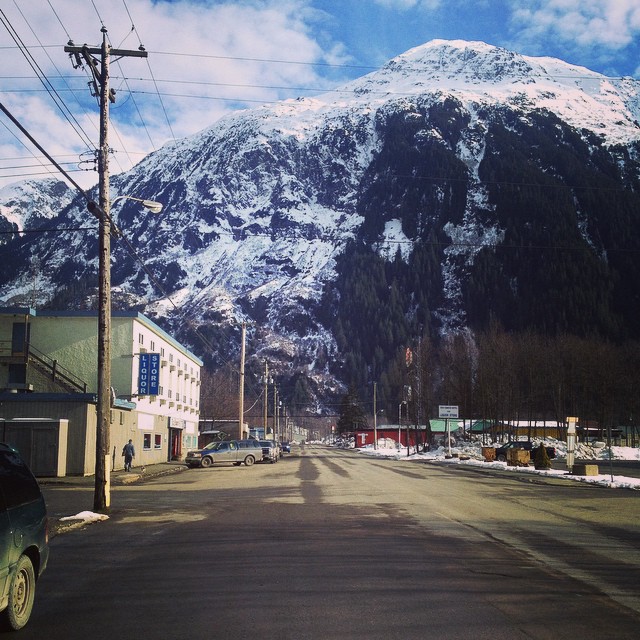 I tried to leave this morning, riding away with my usual  potent mixture of anticipation and regret. After a couple of days in a warm dry house, taking hot showers, eating hot meals and getting to know whatever wonderful person has taken me in (Maria, my current host, is a friend of the equally wonderful people I stayed with in Watson Lake, to whom I was introduced by another set of angels I stayed with in Whitehorse, with whom I was originally put in touch by the inestimable Sarah Outen), I am excited to get myself back on the road where I belong, and to see what adventures the next few miles will hold – but I hate having to say goodbye to new friends, after spending an evening, or two, or three sharing our stories and memories and plans and dreams, knowing that in most cases I’ll never see them again.

But my departure was foiled, only ten miles down the road, by a cracked seatpost. (I’ve cracked at least four seatposts in the eight years since I started cycling, so the ominous crack-clink-THUD is beginning to feel familiar. I don’t know why I have such a high hit rate, but this one was probably the result of the cold temperatures I’d been putting the bike through.) 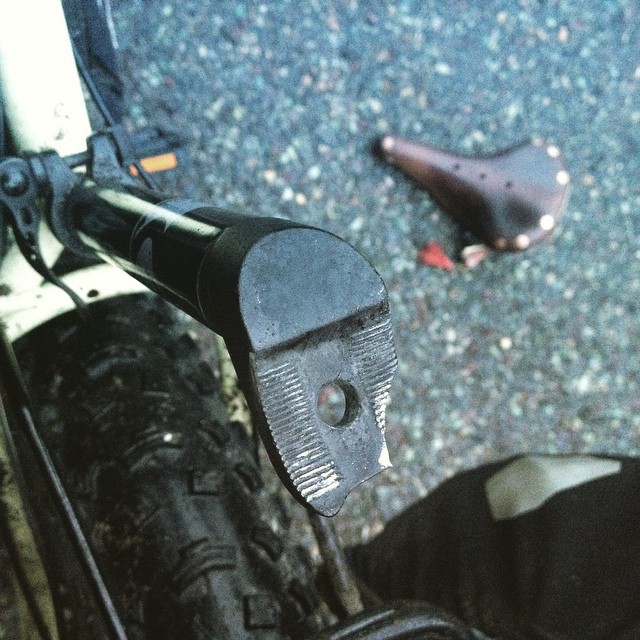 I instantly knew that I was lucky, not only in that I had a permissible reason (in fact an unavoidable necessity) to return to Stewart, but also in that Maria had repeatedly told me I was welcome to stay another day or two if I wanted, or to return to Stewart if anything went wrong – and goodness, this minor disaster would have been a much more significant headache if it had happened on almost any other day of my ride. I might have had to wait for hours in the cold until someone came along who was able and willing to give me a lift to the next town; the next town might have been hundreds of miles away; it might not have had a bike shop anyway.

As it was, I pushed the bike back to Stewart within a couple of hours, and decided that my options were:

I went to see the local police, who are a friendly bunch, and had already offered to help me if I needed it, and within minutes was directed to a gentleman called Al, who lived around the corner, and was ‘one of those people who knows how to fix things’. Al confirmed my suspicions that the cracked post and sheared bolt were unfixable, disappeared round the back of the house, and returned brandishing a seatpost he’d removed from his own bike, which he said I could borrow to get me to Smithers.

It was 11am – almost early enough that I could start cycling again – but I knew it would be a long steep uphill drag for the first two-thirds of the day, and I’d planned big mileages for the two days following, meaning that it wouldn’t do to get behind schedule. I got back on the bike (such relief!) and pedalled the two blocks back to Maria’s house, which is where I am now. She’s still out on the 8-hour round trip to Terrace, where she gets her hair done, but luckily no one locks their doors in these parts, and knowing her as I now do, I don’t think she’ll be too dismayed to see me sitting here when she walks in this evening. 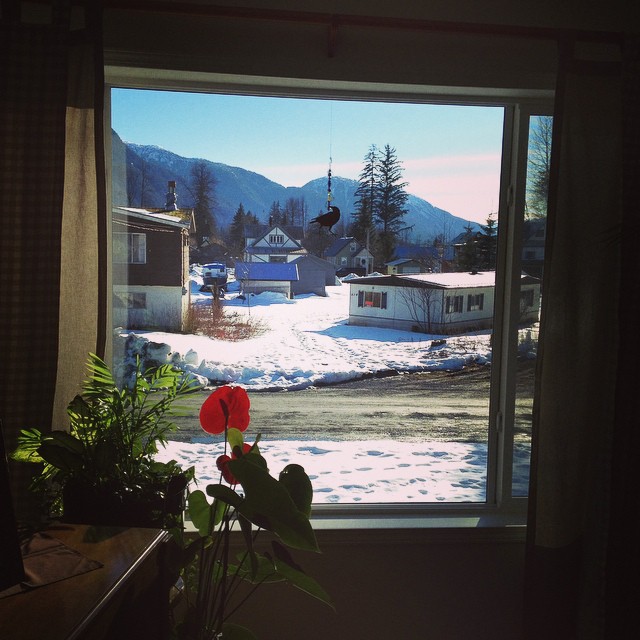