There’s a receptionist in St James’s who continually mistakes me for a man. As I walk in he greets me with “hello sir!”, then does a double-take and speedily backtracks: “I’m so sorry – madam!”. And then he ushers me chivalrously towards the lift, apologizing all the way. Last time I embarrassed him even more by pointing out that he’d done it before, and he frantically explained that it was just a mistake, because you always expect couriers to be male, and started effusively complimenting me on my feminine charms.  Thankfully for both of us, the lift arrived fairly quickly and I escaped up to the second floor to deliver the package.

I really don’t mind when this sort of thing happens – as it increasingly does these days. Ever since I did a degree in gender studies, and started thinking about these things properly, I’ve been wondering why being mistaken for a different gender is such a mortal insult to most people.

Sometimes, obviously, it’s intended as such. As a cyclist whose mere presence on the road seems to annoy drivers to the point of violence, I’m becoming an expert in insults, and quite a few of them seem to be gendered. I am often accused of looking like a man, or of being so unbearably ugly that I’m clearly not fulfilling one of my main purposes as a woman. This has never stopped being hurtful, and probably never will, but it’s not the substance of the insult that upsets me; it’s the intention behind it – the fact that they want to unsettle me, and seek to do so by homing in on what they assume will be my most sensitive point.

(They’re wrong, as it happens. I’m not really in any doubt about my gender, so accusing me of being unwomanly is a bit like walking up to Bear Grylls and implying that he’s a bit of a queen. I doubt he’d take it to heart, or even be offended, because he so obviously isn’t. He’d probably just laugh at you.  They’d get a lot further if they tried questioning my competence and capability, because those I do doubt, all the time.)

Conversely, although I am continually annoyed by postroom guys calling me love, darling, babes, honey, and even sweetie (a term of endearment I find so patronizing that I don’t even use it to address children), I do realize that their intention is to make me feel admired and desired (which they assume all women must want), so although they’ve got it wrong, I know their hearts are in the right place, and (usually) let them off.

It’s obvious that the receptionist wasn’t trying to insult me – once he realized his mistake, he went out of his way to make up for it with flowery compliments. But I’ve chosen to take the ‘insult’ itself as a compliment. Why did he mistake me for a man? Perhaps just because most cycle couriers are male – which reminds me that I’m working in an industry where most women fear to tread, something I’m moderately proud of. Or perhaps it was my broad shoulders and the slight swagger I notice I adopt when I’m in my work gear. Again, these are things I’m more proud of than ashamed. I am stouter and stronger and more muscular than the average woman, because of the thousands and thousands of miles I’ve cycled, and the heavy packages I’ve carried. If this makes me manly – well, then I’d be proud to call myself a man.

It’s all silly of course. As we all know, characteristics like strength and toughness; weakness and softness – and in fact almost any adjective you care to suggest, except perhaps ‘buxom’ – can equally apply to all genders. Some women are strong and decisive and repressed; some men are gentle and sensitive and emotional; most of us are a unique cocktail of all of these.

I approach the whole gender business on two levels. Ultimately, I try to get on with my (strong, sensitive, gentle, repressed) life as if gender barely existed, and to judge people on their individual characteristics, and how they wish to be judged, rather than on how well they conform to ‘male’ or ‘female’. But often this is an impossible ideal. We live in a world riddled with gender, and if I refuse to speak this language, I’ll be unable to communicate with most of my fellow humans. So, inevitably, I end up accepting gender as a shorthand for various other attributes.

Since Christmas I’ve been back on the bike I couriered on before I left for The World – the lovely Evelyn. 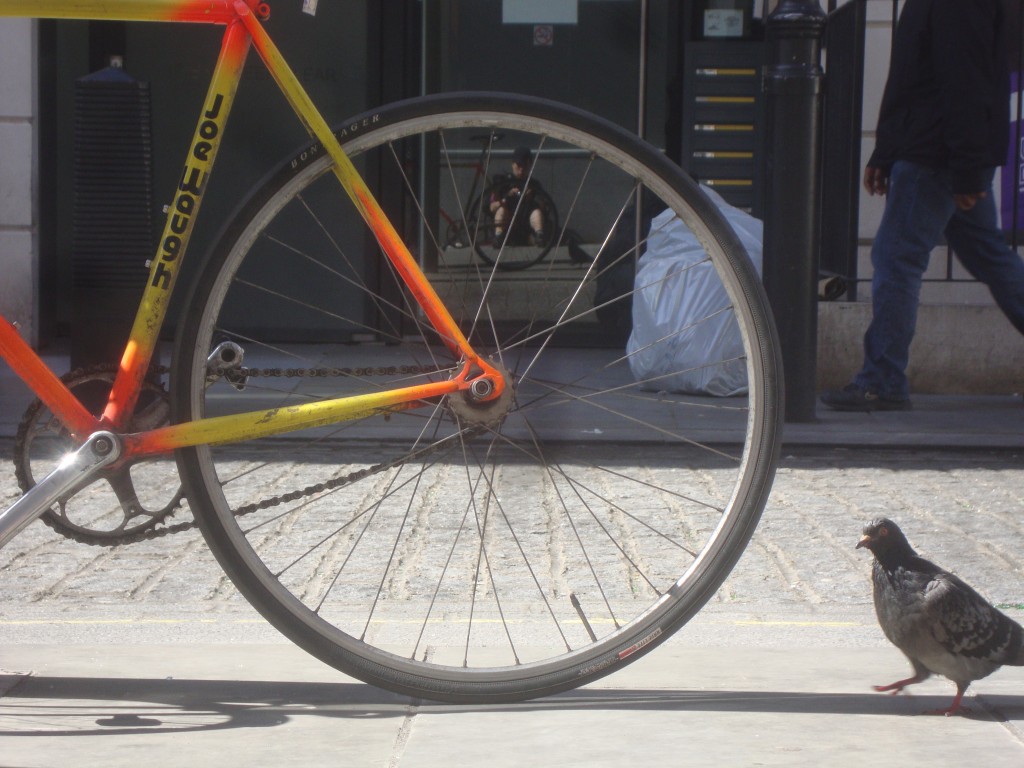 A few people have recognized the bike from Before.  Others are complimenting me on my new ride.

“Nice bike!” said a Metro rider a couple of weeks back. “Is it your fella’s?”

Why would he think that? Apparently the bike “looks masculine”, and he couldn’t elaborate an further on this. Well, no matter. It’s an excellent bicycle and I love riding it, so in this case, ‘masculinity’, whatever that might be, is clearly a good thing.

And just wait until they see my latest ride. 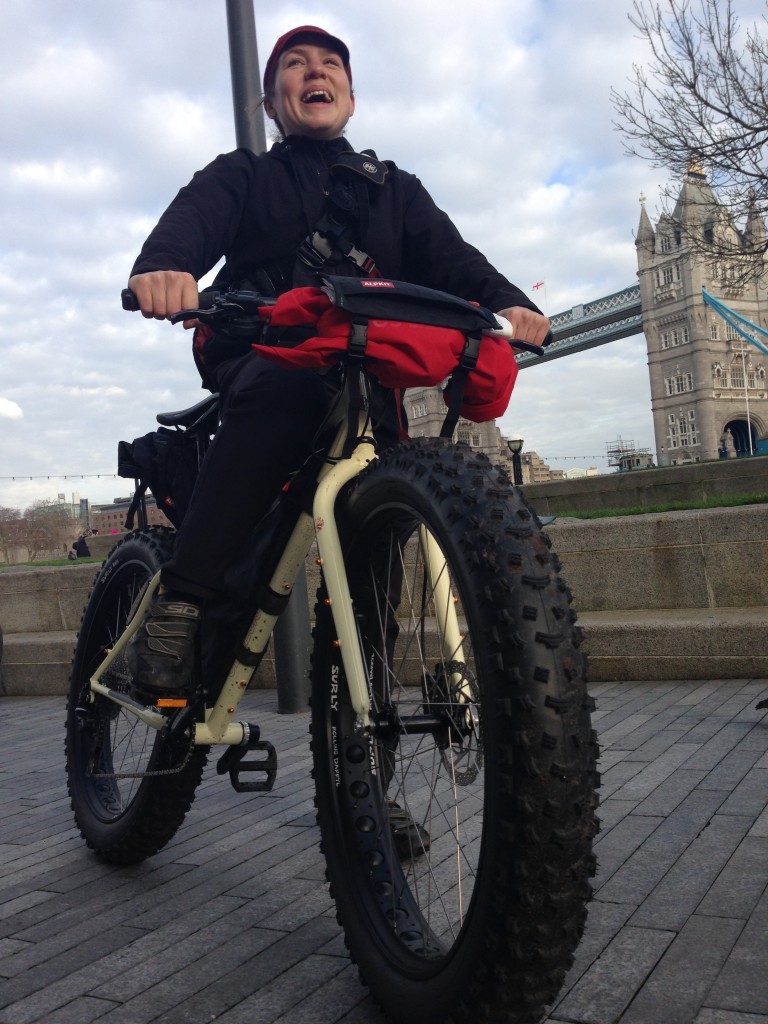 [Photo by the wonderful Andy Welch.]

Genesis Bikes have very generously furnished me with one of their Caribou fatbikes for my Alaska expedition – and it’ll be coming with me on my test run in Iceland in a couple of weeks.

My brother found himself babysitting it outside Sainsbury’s last week, while I nipped in for beers or something, and, as happens when you’re in the company of a bike that looks like it’s been cross-bred with a tractor, a small crowd gathered. When I got back, Sam was beaming. The gang of young men who’d stopped to gawk had almost refused to believe him when he told them it was actually his sister’s bike.

“I’d have thought a man would ride a bike like that!” one of them had said, in awed tones.

He was wrong, of course, but why wouldn’t I take that as a compliment?