Posted in on the road soulsearching

I learned an important lesson this week: moderation. 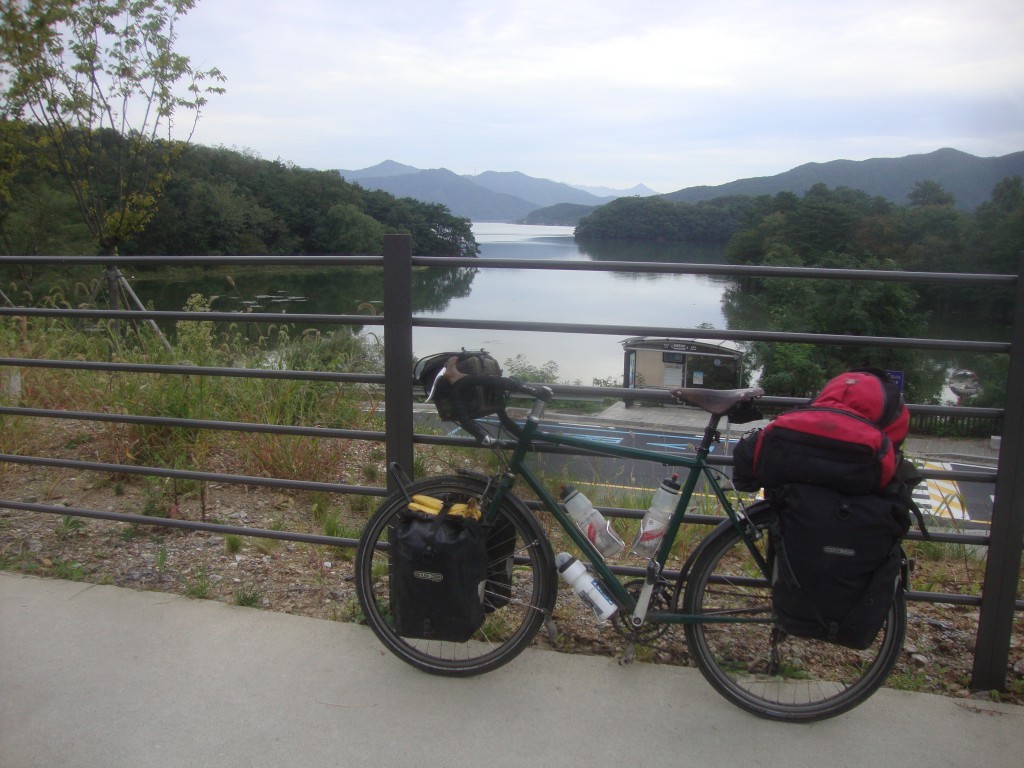 As you might have noticed, it’s not one of my strong points. I’ll either be riding 100 miles a day to beat a visa deadline (and feeling like a superhero), or sitting around in comfy expat enclaves (Islamabad, Hong Kong) for weeks on end, doing nothing (and feeling like a lazy good-for-nothing slob). I enjoy the highs and lows, but I sometimes worry that this isn’t the healthiest way of going about things – and what if I push myself too hard on one of these visa dashes, and get injured or ill, and am forced to sit still for weeks and miss the deadline?

The challenge I set myself in Korea was to find some sort of middle ground. To ride shorter distances (but still to ride), to stop more often, and to find some objective other than getting to my destination in the shortest possible time. To live my life, if only for a few days, like a normal person, rather than a superhero or a slob. (Bearing in mind, of course, that a year of cycle touring has possibly shifted the parameters of what might be considered normal.) Most of Asia has felt like an expedition – I was determined, in Korea, to recapture the sense of holiday that I’d felt riding through Europe.

I received help from unexpected quarters. A couple of hours into the first day, I noticed that my muscles were aching – a sure sign that I’m about to be ill. Sure enough, within a couple of hours my energy had dropped, my head was starting to ache, and cycling suddenly seemed much more like hard work than it usually does. This forced me to slow down. I’d just had a week off in Seoul, and didn’t really fancy going back for a few more days of sitting around. And if I tried to push it and reach Gangneung (on the east coast) in the two days’ riding I believed was possible, I’d either fail, or damage my health so much that I’d have to spend another week recovering when I got there.

This realization occurred to me somewhere on the Han River cycle path, which leads out of Seoul, and must be one of the most hospitable cycling environments known to humankind. Whereas in China I’d felt like the whole country was conspiring to throw obstacles in my path (“we’ll only give her a 15-day visa! ah, but she’s riding faster than we expected. ok, bring on the mud and torrential rain! hmm, not working. let loose the puncture fairies! crank up the headwind! take away the tarmac! instruct the citizens of Taiyuan to direct her in every direction but the right one!”), here everything was being done to make my life as easy as possible. The cycle path was smooth and generously wide, with no traffic apart from bikes. (And there were hundreds of them! Nifty young men on Bianchis and Pinarellos, flashily attired youths on new-looking mountain bikes, older ladies and gentlemen on miscellaneous shoppers, holding their heads up high as if doggy-paddling.) There were regular bicycle workshops, dotted along the route in portacabins, and numerous cafes and restaurants, over-decorated with bicycle paraphernalia as if to assure us cyclists that, yes, we really were welcome. Every few miles I’d come across a small 7-Eleven store, surrounded by tables and chairs and bikestands, and feel tempted to join the other cyclists sitting there slurping noodles and sipping coffee, were it not for the fact that I’d already stopped at the last one.

At about lunchtime I stopped in one of the cyclist-friendly cafes (the proprietor greeted me very warmly, spotted instantly that my lock was sticking (because of the torrential rain I’d ridden through the previous week) and whipped out a can of WD40. 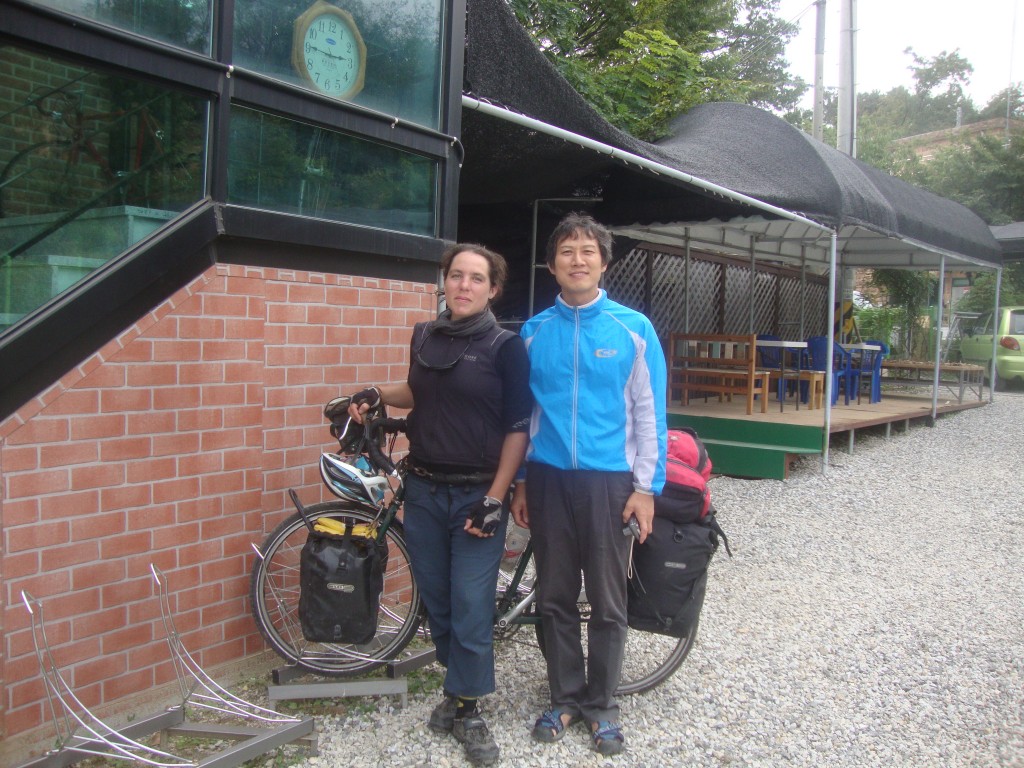 I treated myself to a coffee,  fretted guiltily about how expensive it was, and about how little progress I’d made that day, and about how I might fail to make it to the east coast in the two days I’d budgetted  – and then I realized how ridiculous I was being, and gave myself a little talking to.

Chill out Chappell! It doesn’t matter how long it takes you to get to Gangneung. For the first time in a year, you don’t have a visa deadline. It doesn’t matter if you don’t ride 100 miles a day – or even 100km. No one’s keeping track – no one even cares. Other cycle tourists don’t push themselves the way you do. They ride short distances, they stop for lunch, they enjoy the scenery, and no one thinks any the less of them for it. You were never going to be the fastest anyway. What are you trying to prove? You won’t be less of a person if you take it easy. You might be less of a hero, but that’s probably only a good thing…

After about 20 minutes of this, I had finally convinced myself – at least up to a point. For the remainder of the day I rode along feeling alternately guilty for rushing when I’d sworn not to, and guilty for riding slowly when That Emily Chappell would have ridden through the night to make it to Gangneung on time.

But by the following day I’d got into the swing of things. I was feeling progressively more and more ill (nothing more serious than a cold, but you know how that can wear you out sometimes), and gladly gave in to my impulses to stop and rest every hour or so. I drank large quantities of cheap supermarket coffee, and read large chunks of Atwood’s The Blind Assassin. Sometimes lunch looked like this. 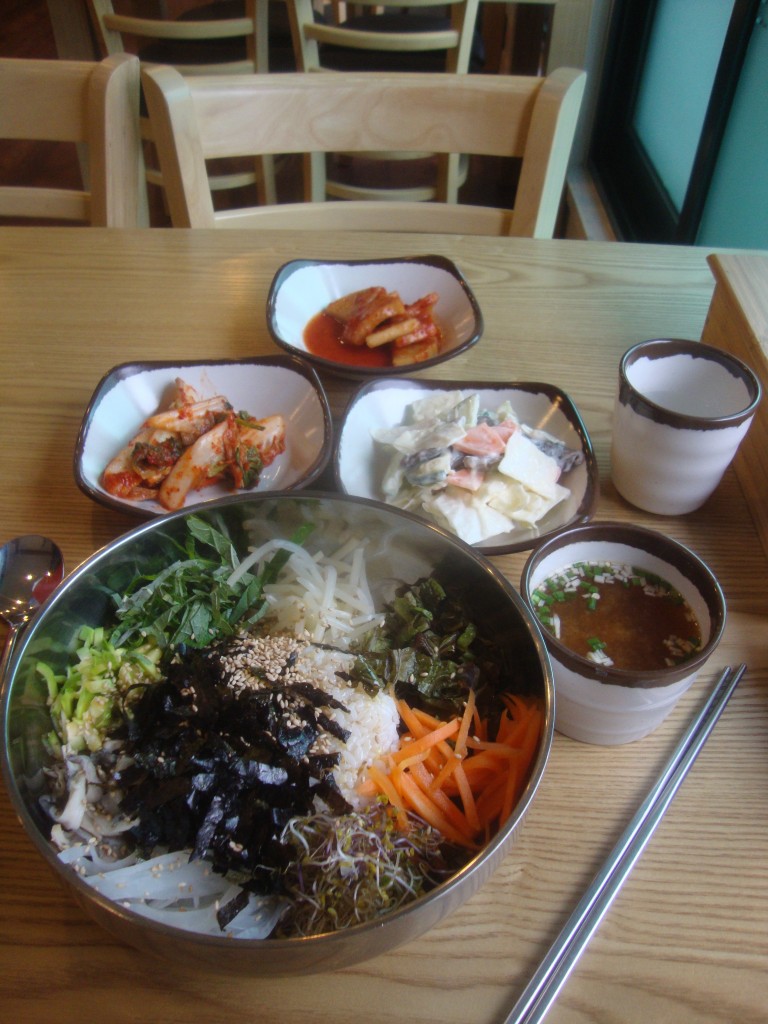 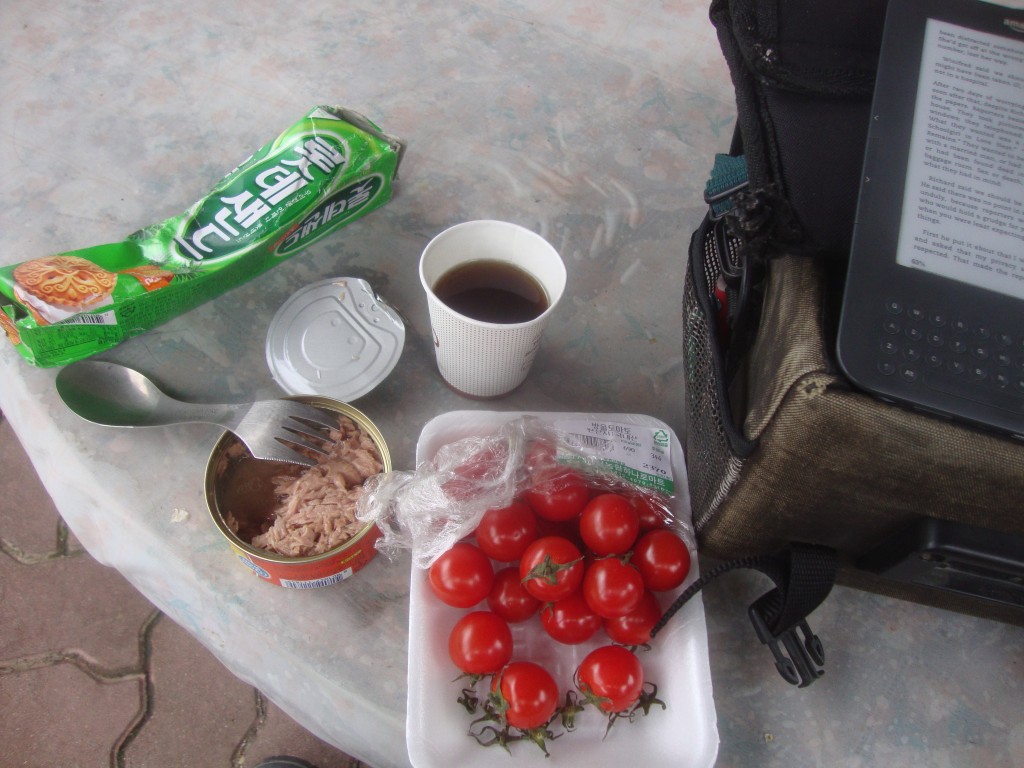 I enjoyed the late-summer scenery of the Korean Peninsula. Only a few of the leaves had begun to turn, but a chill in the air told me that autumn was just round the corner, and made for some cosy nights in my sleeping bag. 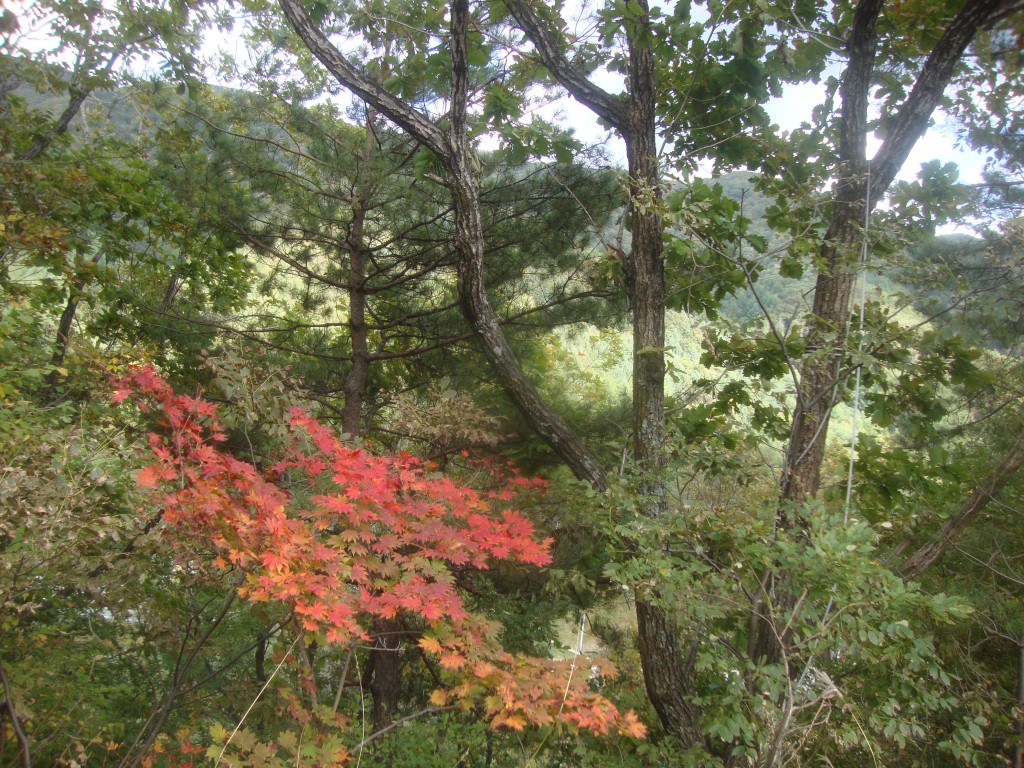 As I went east, the mountains got higher, although after the giants of Central Asia, I was no longer very sure whether these even qualified as mountains. There were some wonderful switchbacks though. 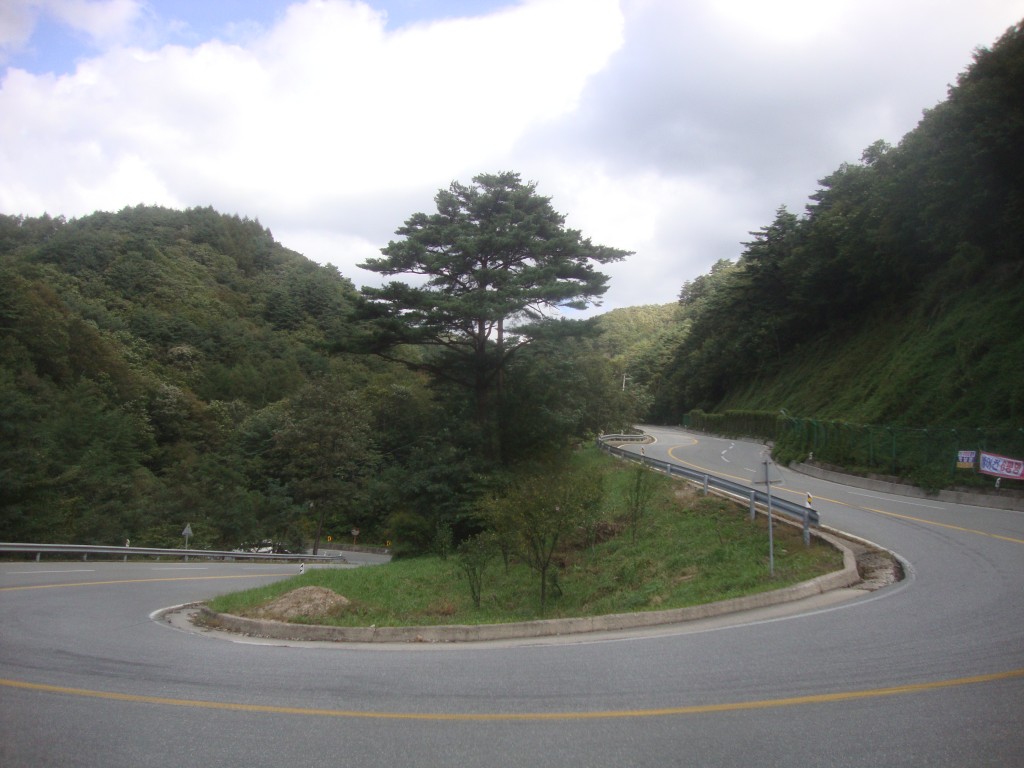 I was reminded of the leafy climbs of Austria and Slovenia, almost exactly a year ago.

And of course, Korea, like all other countries, has had its share of heartwarming hospitality. One afternoon it rained, so heavily that I was soaked to the skin within minutes. I battled on for a few hours, but at 5.30 I pulled up at a petrol station, shivering with cold and fatigue, and decided to call it a day, even though there was at least another hour of daylight left. The lady in charge wasn’t too sure about letting me camp, but eventually led me over to a shed, stacked with all imaginable odds and ends, and told me I could put my tent there. (As soon as I’d pitched it, and wrung out and hung up my wet clothes, the rain magically stopped, but by then I wasn’t going anywhere.) 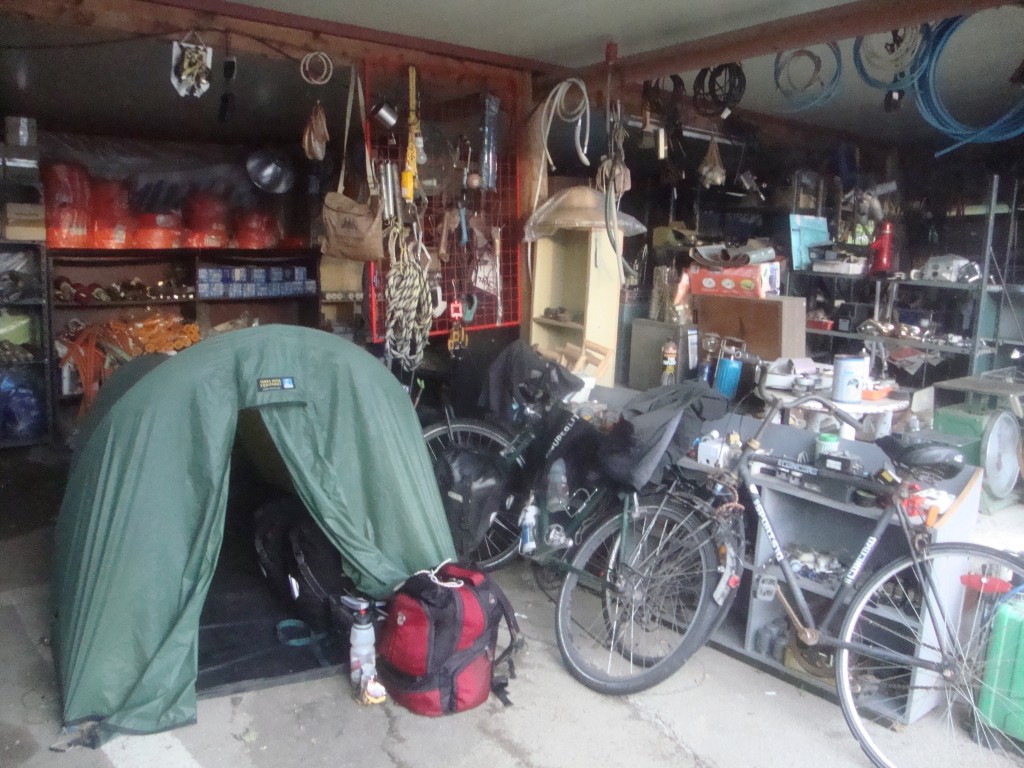 I dragged myself into the shop to buy more of the noodles and biscuits that make up the bulk of my  diet on the road – and by this time the lady of the house had warmed up to the idea of having a guest. She and her daughter were frying up a massive pot of bacon and sausages, and insisted I join them for dinner. We managed to find enough vocabulary in common to talk and laugh for the rest of the evening, and they even opened a bottle of wine in my honour. (The first time I’d been offered wine (apart from by European expats in Islamabad and Hong Kong) since Bulgaria.) 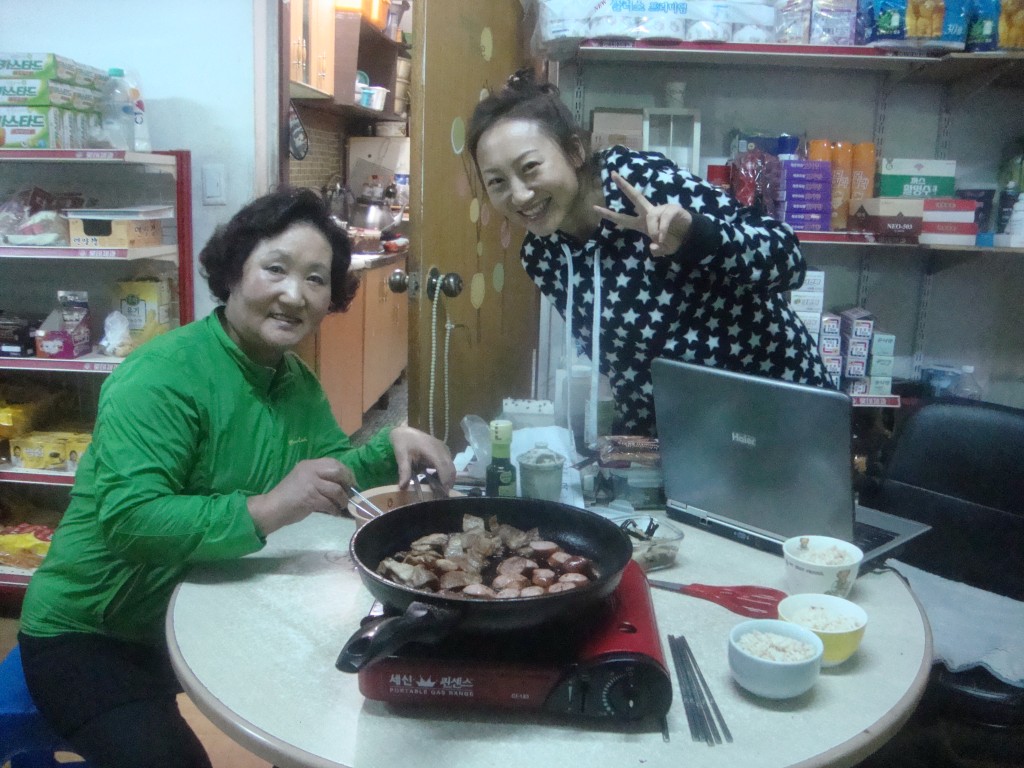 There were more climbs over the next couple of days, but with my reduced health, I had no option but to take them slowly. Just over one of the passes, I spotted a small wood cabin selling coffee, and had to stop and investigate, marvelling at how different Korea was to the wilds of China and Pakistan (there are no coffee shops anywhere near the Khunjerab Pass). The inside of the cabin had a warm, woody, coffee smell, and was stacked with jars full of beans. I bought a cup (now that I’d declared myself on holiday for the week, I was less worried about my budget), got out my Kindle, and spent a happy hour relaxing and caffeinating. 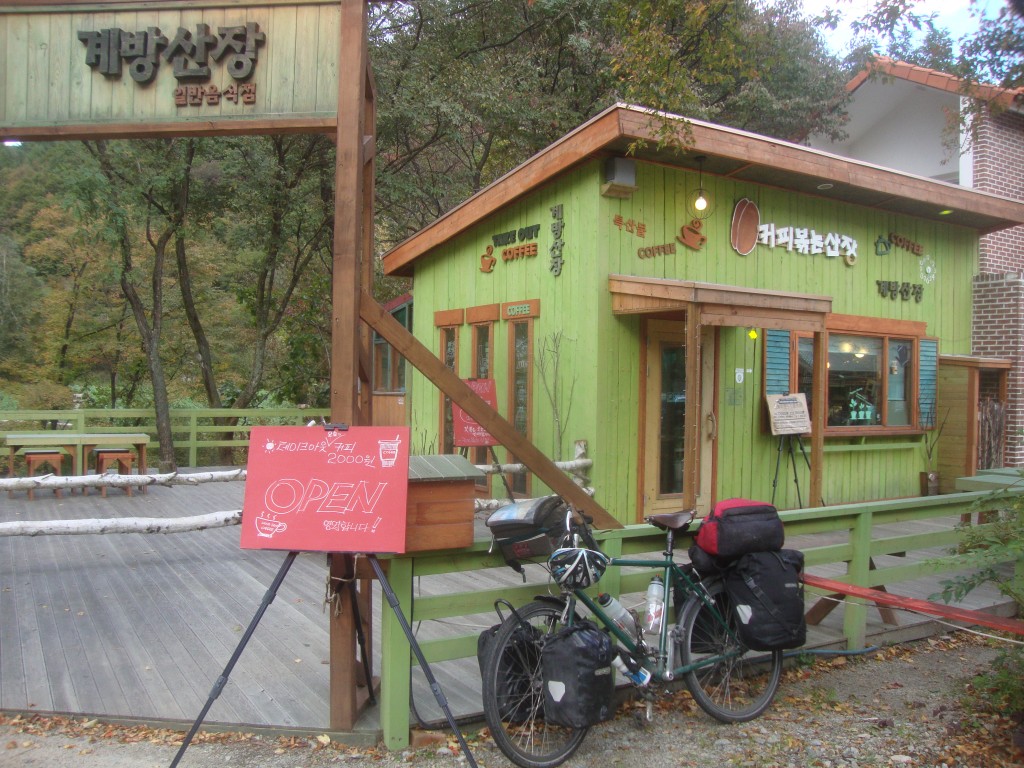 That night I camped next to an abandoned hotel, with only 50km to go till  Gangneung. Ordinarily I’d have stayed on the road and finished the job, but now I was in no hurry. It was the perfect night for camping out, and I could have a lie-in and still get to my destination by lunchtime.

The following morning I crawled slowly to the top of the final pass (the cold was setting in, and I was dizzy with tiredness) and found myself gazing down on the ocean, blue and shimmering, and so close to the colour of the sky that I could barely make out the horizon. This, far more than the quays and warehouses of Tianjin’s port, felt like the end of Asia, and I sped down the hill into Gangneung with a distinct glow of triumph. 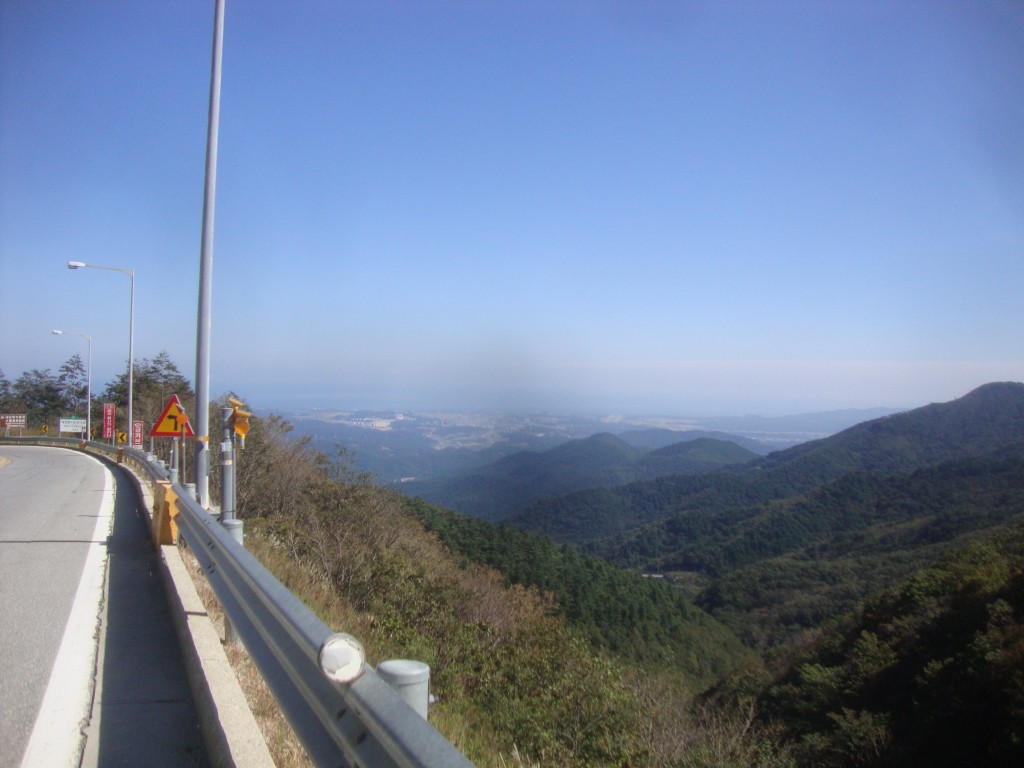 And now I’m slowly working my way down the coast towards Busan, stopping for long lunches and camping with the sound of the sea in my ears. I’ve given up on my over-ambitious plan to take in as many of Korea’s mountains and national parks as I could in a fortnight. I may be missing out, but sometimes in trying to do too much, we actually achieve less. And, as I’m continually reminded by people who know me better than I do myself, there is, anyway, far more to life than mere achievements.

Previous Article Any other business
Next Article On holiday