Posted in bicycle on the road

I can hardly believe it, but it’s already been a year since I stopped being a cycle courier.

Admittedly, the last few weeks I spent at home and the first few weeks of my trip were so memorable that I’m currently observing some sort of anniversary almost every day. But this one is, for me, particularly significant. It’s the day I ended the whirlwind romance of my three years on the London courier circuit and committed myself to the matrimonial sobriety of cycling round the world. I even had a stag party (that anniversary’s coming up next weekend).

Couriering isn’t supposed to be a career. You’re meant to stick at it for long enough to prove yourself (two winters is about right), and then get the hell out before you become a bitter and withered old-timer who’s only on the road because nowhere else will have them. (Or so I was told by various bitter, withered old-timers when I first started.) I used to breeze into the control room after a long happy sunny day on the bike, and enthuse over how happy I was doing this job, and how I wanted to keep going forever. Andy, my beloved controller, would reply “but I hope you don’t.” He thought I could do better. I’m not so sure.

My friend Nhatt talks about cities as if they’re friends and lovers. “London has my heart, but occasionally we have to agree to see other people”, begins one of her short stories. And, returning from the States last summer, she remarked that “I have got the biggest crush on NYC. It’s kinda like figuring out that the really cute bully in school is actually a nice guy once you get him alone.” I talk about my bikes in the same way.

Lola (the pink Surly Steamroller fixie that I toured the UK on) was my first love, who died tragically young (rain, skid, lamp post) and was replaced with indecent haste by Crispin, the murderous Condor Pista who spent most of the following three years trying to sabotage my career. We should never have stayed together that long. It was the classic interdependent abusive relationship. Eventually I added a Salsa Casseroll to my stable. She was golden and shining, and seemed far too good for me and, knowing she wasn’t the sort of bike who’d be happy cycling round the world, I eventually sold her to my friend Grace (who took her out for a test ride and instantly fell in love), with the sort of generous resignation with which you’ll attend the wedding of someone wonderful you once dated, knowing all along that you’d both someday be happy with other people.

(The ever-observant Nhatt, on reading the above paragraph, likened my current bicycle to an arranged marriage, since I’d already committed several years of my life to it before we were formally introduced.)

And, as time goes on, I realize that there are more and more parallels between my loves and life choices and everyone else’s, even though they – and we – are mostly very different. This summer has seen a positive epidemic of weddings and civil partnerships among my friends (there were four this weekend, and there’s been at least one every week since June), and I’ve begun to feel very much like the Hugh Grant character in Four Weddings And A Funeral, who at one point wrily remarks “for the first time in my entire life it’s Saturday and I don’t have a wedding to go to” (except, thankfully, I’m on the other side of the world, so have the perfect excuse for nonattendance). It’s that time of life, I suppose. In a couple of years they’ll all reliably be getting pregnant, and I’ll arrive home to find I’m an aunt and a godmother several times over.

I’m enjoying watching from the sidelines, and I’m also enjoying watching my own, very unconventional love affair unfold. Because, when I made the casual decision to give couriering a go when I finished my masters (in the middle of an economic crisis that ensured I’d probably never find a ‘real’ job), little did I realize I was about to meet the love of my life.

The first few weeks were as intense as they always are when you meet someone new, and suddenly your life is bursting at the seams with them, to the exclusion of all and everyone else. Friends complained that they hadn’t seen me for weeks, and wondered if I was avoiding them. I was, in fact, either on the road, asleep, or exhaustedly cramming pasta into myself in the small window between the two. 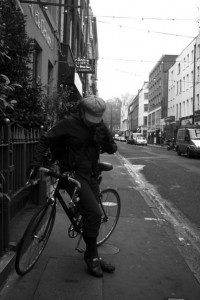 And then, slowly but surely, I settled into the job, and began to get good at it – and found that, like all the best and healthiest relationships, it was also good for me. I became stronger and fitter – and more independent and resourceful – than I had ever been in my life. My mind, stoked by the constant adrenaline and endorphins and fuelled by the daily profusion of people and places and challenges and conversations and arguments, blossomed into a brighter, better version of itself than it had ever been when I was toiling over my footnotes in the library. Falling in love can feel like coming home and finding that, in your absence, home has become even better – the wisteria has more flowers, the kitchen is cleaner and brighter but still just as cosy and familiar, your bed is even more comfortable than you remembered – but is still just the same as it always was. It’s a return to yourself, but it’s also a discovery of a better self than you thought you could ever possibly be. Part of the mingled shock and comfort of it is, I think, recognizing yourself in someone else, often after a long absence, and then finding that in their presence you magically become more witty, charming, generous, confident and generally impressive than you ever thought possible.

That’s what happened to me. For the first time in my life, I felt beautiful – the magnificent butterfly that improbably emerged from the shy, squat, bookwormish caterpillar’s chrysalis. This is what love does to you.

I think I will always look back on those three glorious years as being the pinnacle of my Youth. I was free, I had the wind in my hair, I felt like I could go on forever. I’ll never forget the ride home after my last day on circuit and my first evening of farewell drinks, gliding through the liquid night air, up the hill to home, as I had so many times before, but never would again. I was leaving the job I loved while I still loved it, and that seemed in some ways to make a lot of sense; in other ways to make no sense at all. I comforted myself with fantasies of coming back to London someday and picking up where I left off, but knew that this was unrealistic. Couriering isn’t the kind of career anyone can – or should – sustain forever. It was right that I had got out while the going was good.

A year later, I’m not so sure. I still miss dancing with the traffic. I miss hanging out on Gresham Street and at Creative Corner. I miss the tight, taut feeling of my bicycle between my legs, and the way it became an extension of my body. I miss all the little meanings and memories I’d written into even the most insignificant street corner and park bench. I miss the post-work beer and sweat and hyperactive camaraderie with all the gorgeous specimens of manhood and womanhood who were my colleagues. I miss burrowing around in the innards of office buildings, looking for that elusive postroom. I miss the comforting heft of my courier bag, and the way it would wrap around my body like a hug. I miss sitting in the control room before work, dunking custard creams into a mug of over-strong Nescafe and listening to Andy making sarcastic comments to other riders over the radio. I miss the simple satisfaction of food and bed after a good hard day’s work. I even miss yelling at pedestrians.

Maybe one day I’ll be back. 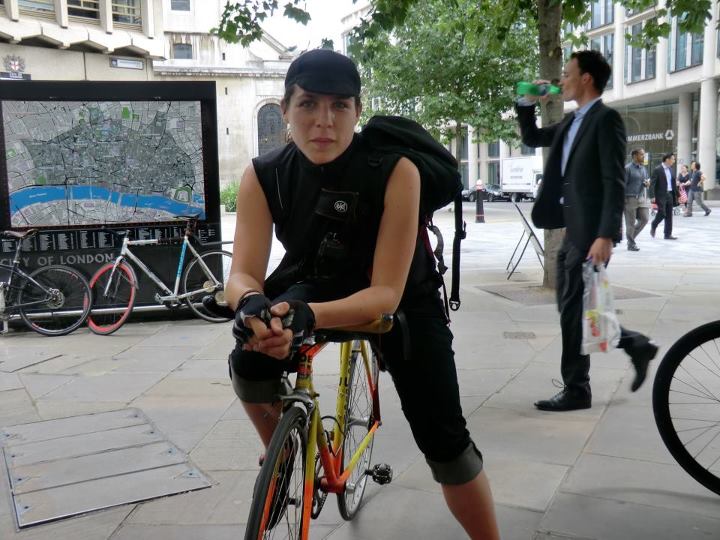 Previous Article A bit more of Qinghai
Next Article Where are all the women?