A bit more of Qinghai

I think the reason I fell so heartily in love with Qinghai is that, at every moment, it managed to give me exactly what I needed. For the first few days I revelled in solitude, cool breezes and empty space as far as the eye could see or the bike could ride. And then I found my (admittedly mosquito-ridden) pastoral idyll, and realized how much I’d been missing grass and trees (hadn’t seen much of either since Hunza, a thousand miles, a mountain range and a desert ago).

And then I started to meet people again.

Late one afternoon I decided to swap from one lane of the highway to the other. Lots of the highways in China consist of two roads a few hundred yards apart, one westbound and one eastbound, which I appreciate, as it means I’m less likely to be involved in a head-on collision with an overtaking lorry. However, in Qinghai people seem to just use whichever road is most convenient for them, regardless of its assigned direction, so you’d frequently meet westbound traffic on the eastbound carriageway, and vice versa. I tended to pick whichever road looked quietest.

At this point the two lanes were fairly close together, separated by a few metres of what looked like sand, but what, alas, turned out to be deep damp clay. Within a couple of seconds my wheels were almost irretrievably stuck, and as I tried to wheel the bike forward out of the morass each wheel became completely encased in mud, which then collected around my brakes, clogged up my drivetrain and covered my panniers. My feet became great clumps of sticky mud. A group of workmen looked on with great interest as I heaved my worldly goods back towards the road, but didn’t offer to help. 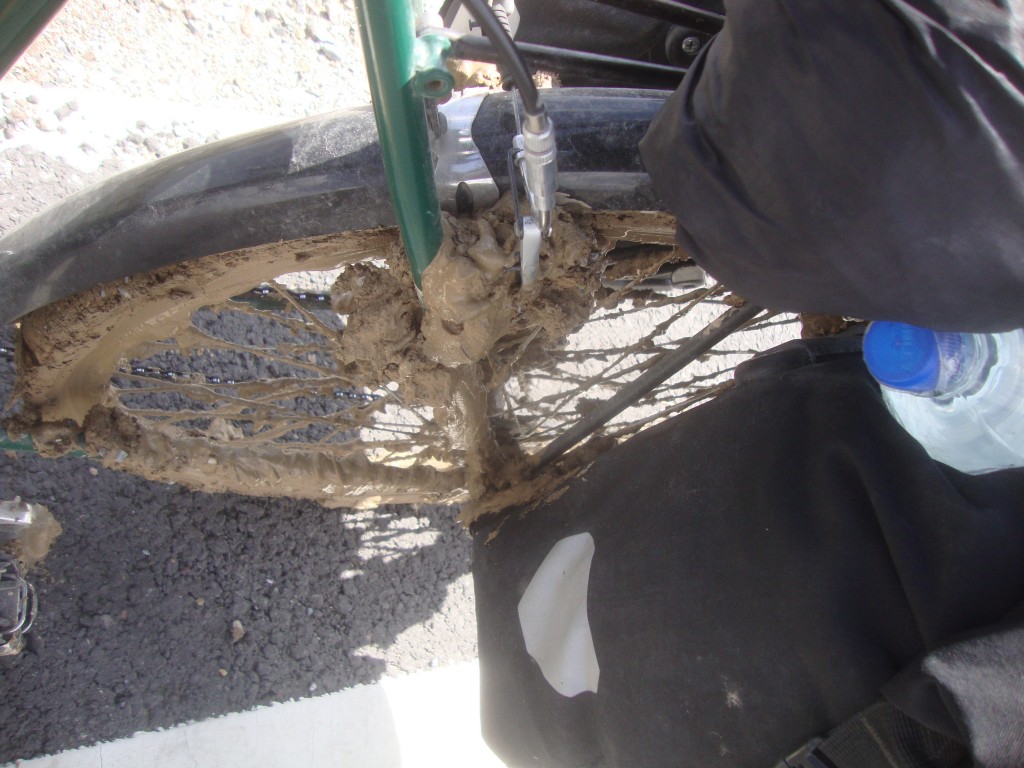 I scraped off a bit of the mess with some roadside weeds, but the bike was still barely rideable. I couldn’t change gear, and although the brakes still just about worked, the sound of thousands of small stones grinding against my rims meant I was somewhat disinclined to use them. I was reminded very much of that day in Eastern Turkey, when I was similarly incapacitated by ice. 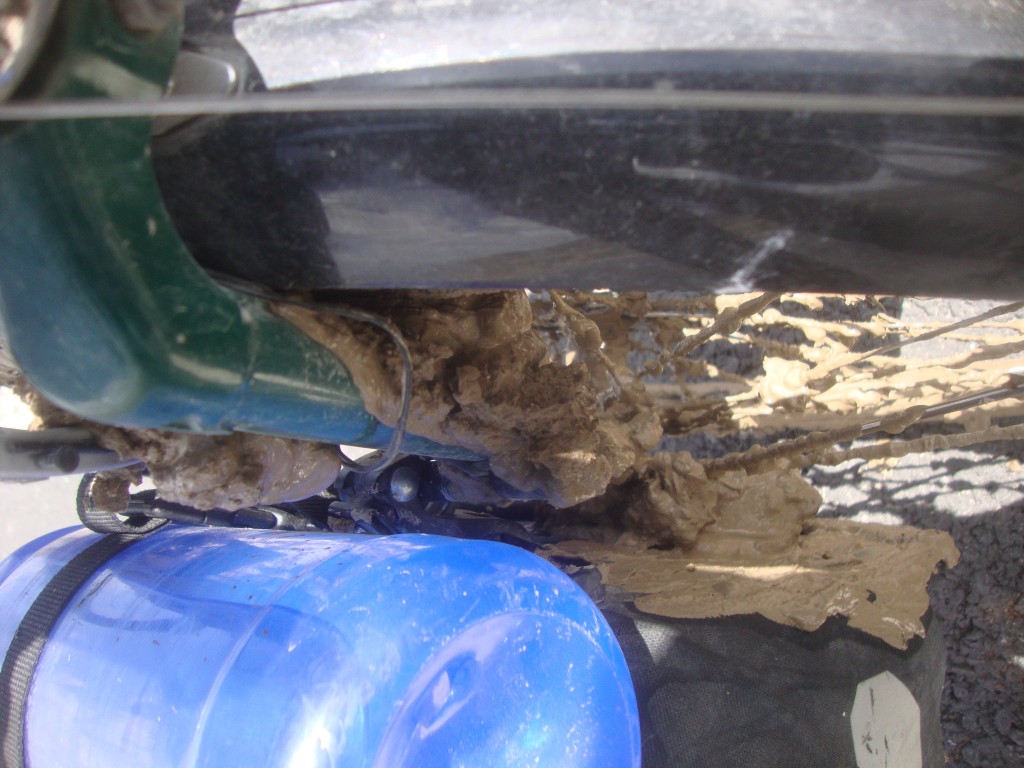 Fortunately, just as happened back then (I was rescued by some men with a pot of tea and a can of antifreeze), I made it to the next village, and the very thing I saw was a group of men with a hosepipe. They were just as delighted to help me as their Turkish counterparts had been, and it was just as well – the mud was as thick as plastacine and as tenacious as chewing gum, and it still took us a good twenty minutes to get the bike clean. 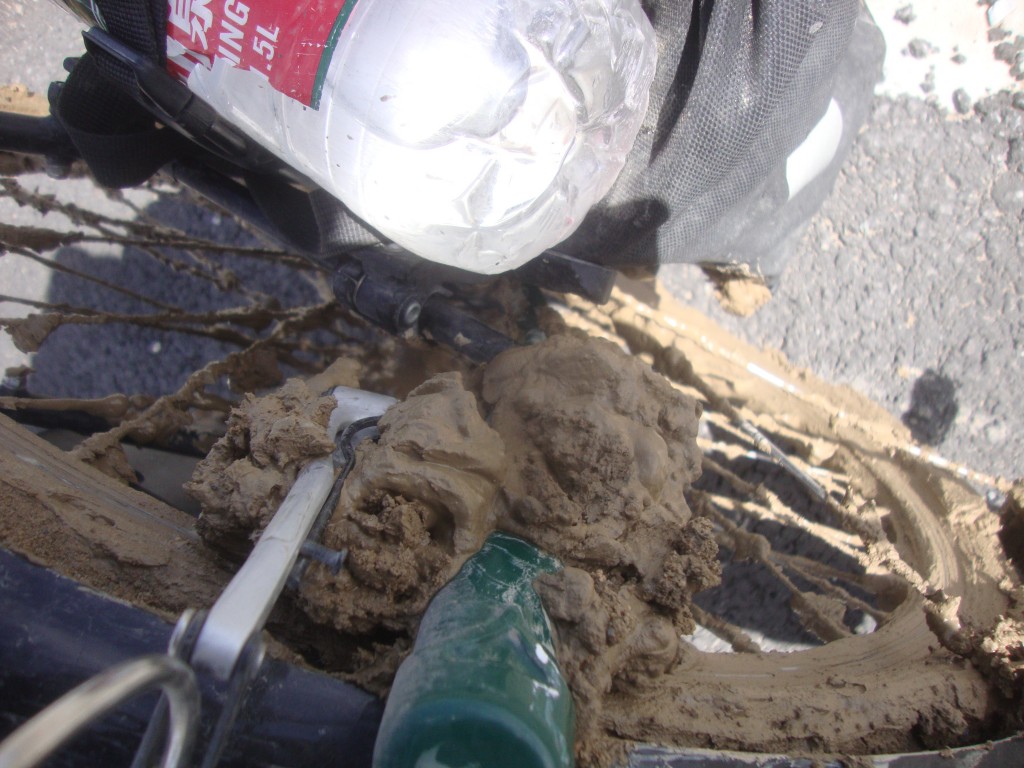 That evening the weather and my health both took a turn for the worse, and the following day I covered less than 100km. Somehow, none of the roads and settlements I came across corresponded to what was on my maps, and by mid-afternoon I began to suspect I was on the road I’d been trying to avoid – the one that went south of Qinghai Lake, and over a 3731m pass. At 4pm I rolled into a small town called Chaka, which I hadn’t expected to be there, and began to worry that I was even further off course than I’d feared.

I stopped at a petrol station to get my bearings and top up on the cheap instant noodles that currently form the bulk of my diet. Petrol stations have been my saviours in most countries (particularly Turkey and China; less so Iran). Modern-day oases in the lengthy wasteland of intercity highways, they usually have food, water, toilets, air-conditioning or central heating depending on the season, and bored employees who are only too happy to have an exhausted cycle tourist to feed, befriend and interrogate.

Chinese petrol stations are generally staffed by a friendly gaggle of twentysomethings, who will often, especially in remote areas, live there almost full-time and sleep in rudimentary dorms when not on duty. 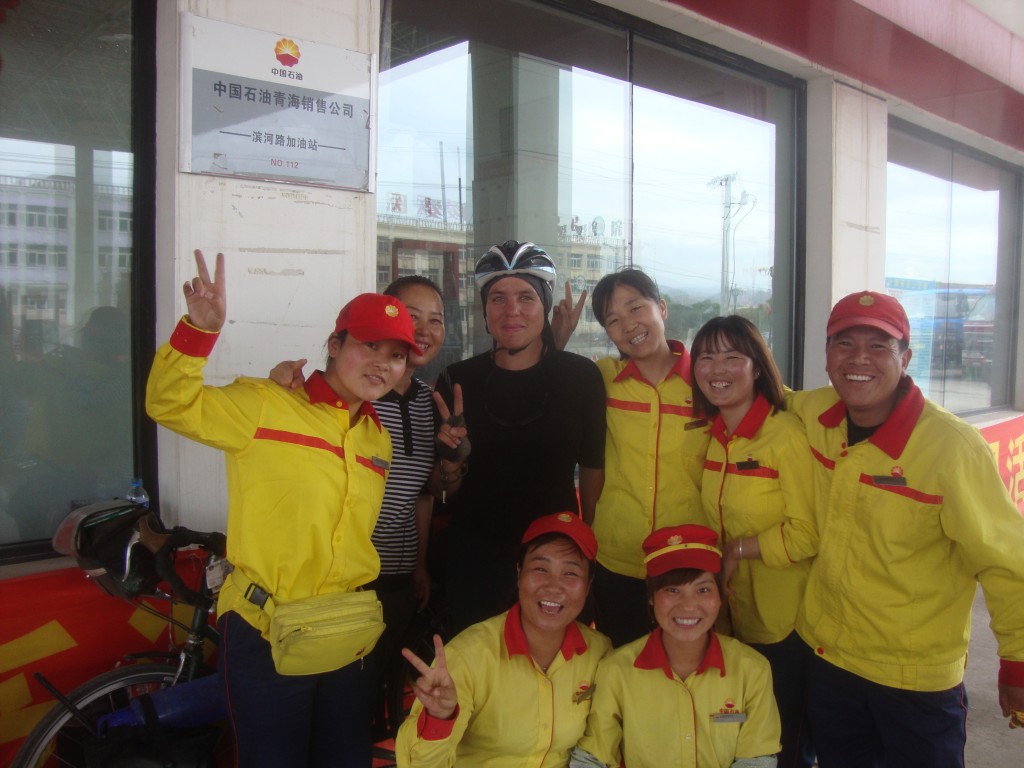 The staff in this particular petrol station, perhaps sensing that I was tired, grumpy and under the weather in more ways than one, decided that it was too cold and rainy for me to continue, and told me I could sleep there, in the bed of a girl who was doing the night shift. There were still a few hours of daylight left, but I was easily talked out of getting back on the bike, reasoning that if I had a square meal, a hot shower and a dry bed, I could still comfortably cover the remaining 315km to Xining in two days.

I’d expected a quiet snoozy sort of evening, but my new friends were determined to make the most of my unexpected visit, so as soon as I’d cleaned myself up they stuck me on the back of a motorbike and took me out to see the town. First we stopped off at one of its nicest restaurants… 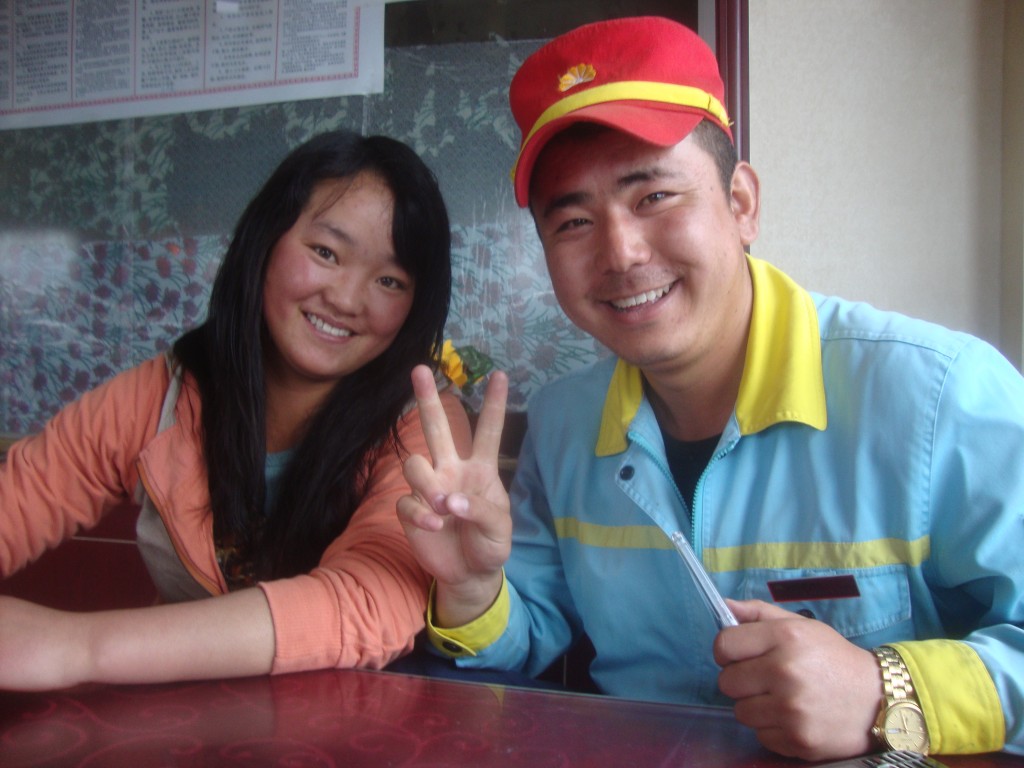 …and ordered a banquet of local delicacies which, after several days of living on instant noodles and biscuits, was just what I needed. 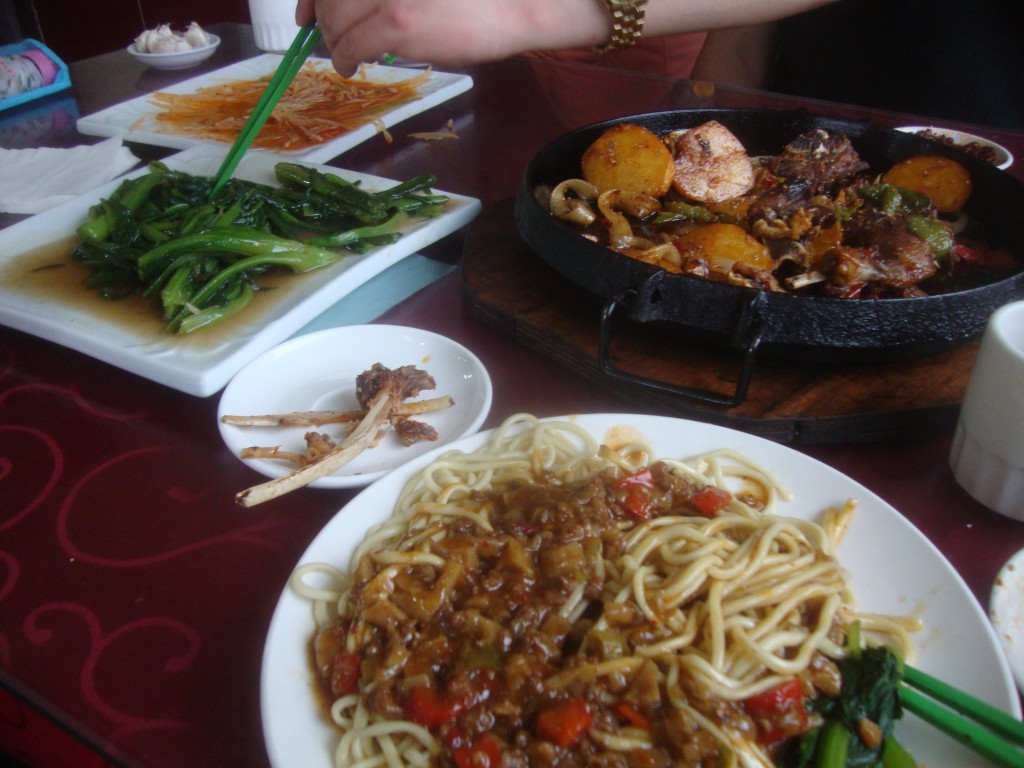 Then we sped off to pay a visit to Chaka Lake, not as famous as the nearby Qinghai Lake (which is the largest in China, and a major tourist destination), but still inspiringly beautiful. 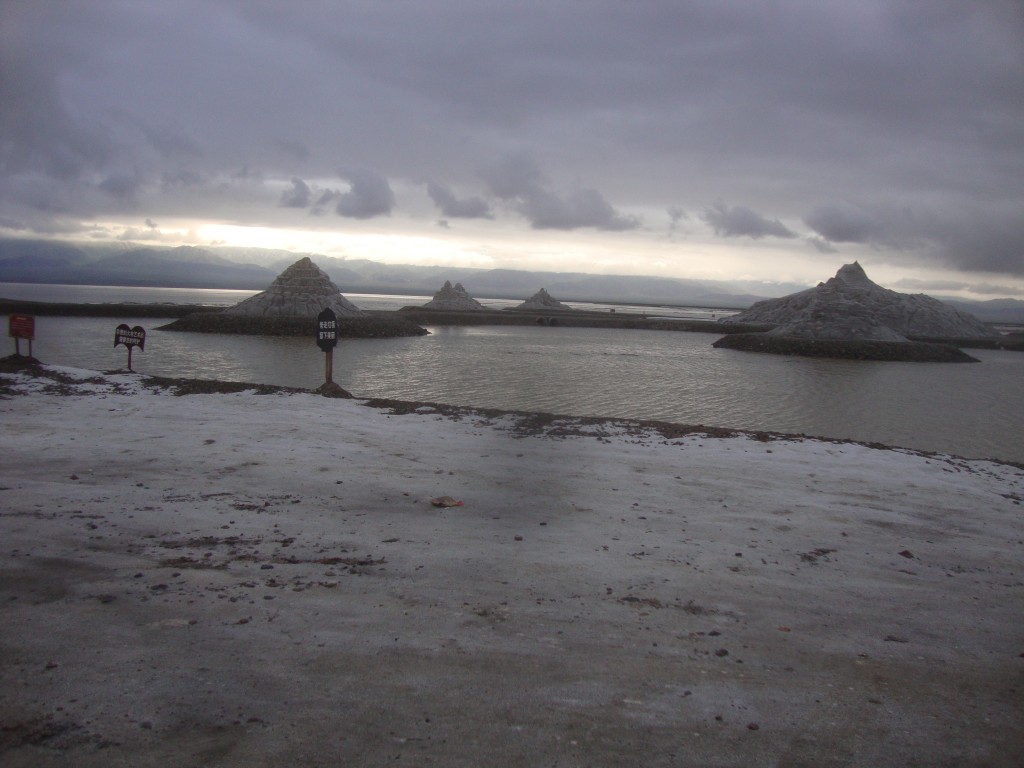 It was surrounded by a collection of incredible salt sculptures, of which my self-appointed guides were justifiably very proud. 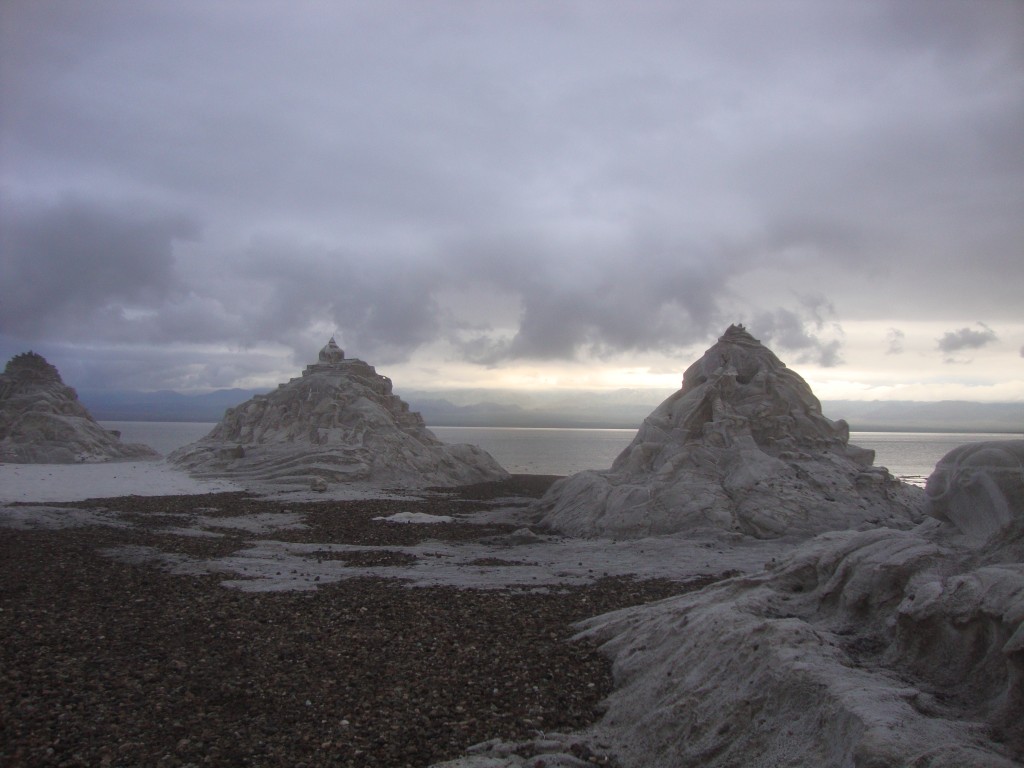 I was particularly taken with this one. 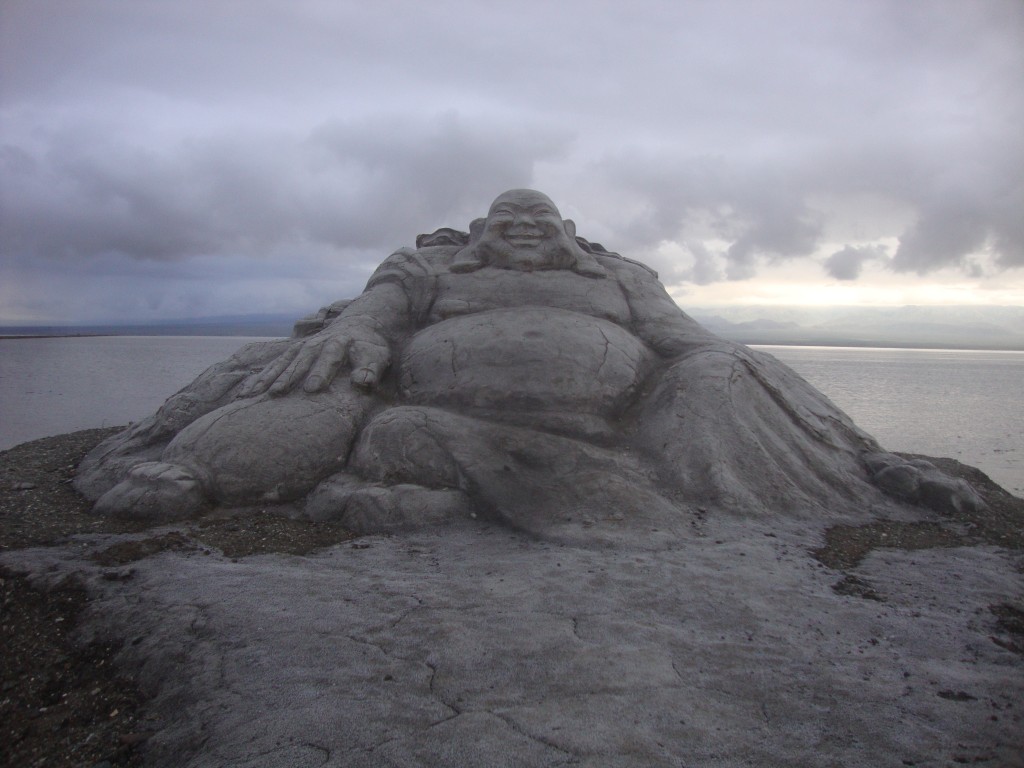 And then it was back to the petrol station for an early night, and the unanticipated luxury of clean cotton sheets, rather than my soggy tent and fetid sleeping bag. The next morning they stuffed my food bag with biscuits and energy drinks and waved me off anxiously into the rain.

There followed a day of two halves. I spent the morning struggling up a drizzly mountain pass (it turned out to be 3817m, not 3731m), enjoying the scenery (grassy crags that wouldn’t have looked out of place in Scotland or Wales) but struggling with the cold and the damp and my increasingly sore throat. I was soaked and shivering uncontrollably by the time I got down the other side, so spent an hour warming up in a cafe, having I-can’t-go-on thoughts and gazing despondently out at the low grey clouds that stretched from horizon to horizon, and the raindrops falling relentlessly into the puddles.

But, as I steeled myself to get back on the bike and ride through another six hours of rain, something magical happened. Within a matter of minutes the clouds thinned out, the rain stopped and the sun emerged. All around me was rolling grassland, embroidered with yellow, purple and white flowers, and scattered with adorably fluffy yaks. 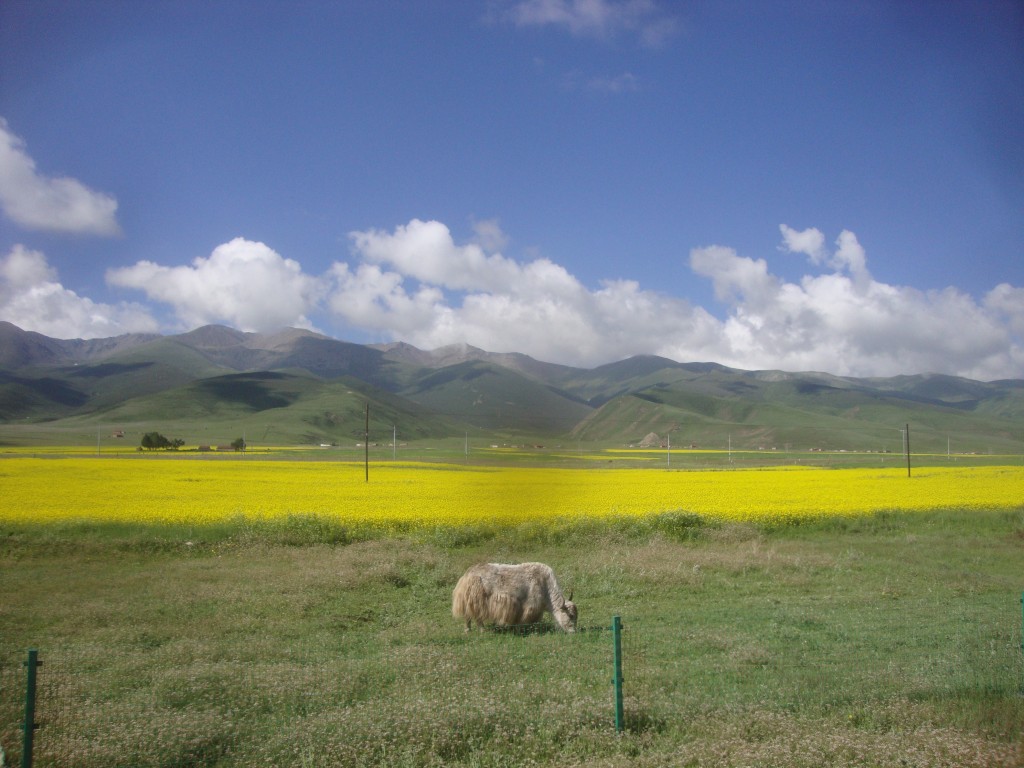 To my left was the shimmering silvery-blue expanse of Qinghai Lake (the closest thing I’d seen to the sea since Istanbul), and a few hours later I sat in my tent on its shores, watching the sun set as I burnt my chapped lips on yet another bowl of noodles. 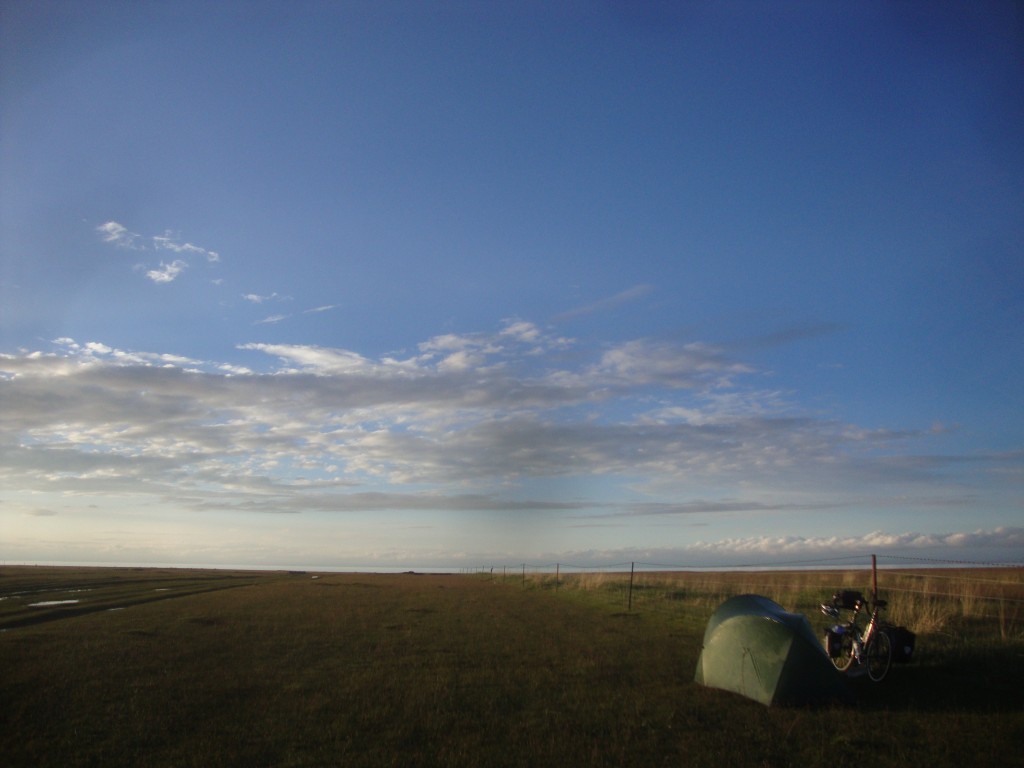 I’m leading a charmed life these days. When I’m tired and hungry, someone offers me food and shelter. When I accidentally clog my bike up with mud, the very first person I meet has a hosepipe. And when I’m cold and wet and starting to feel like it’s the end of the world, all of a sudden the rain stops and the sun comes out. I’m still a long way from believing in god, or ascribing all of this to any sort of higher power, but as time goes on I have more and more faith that the world will always look after me.