I’d read all about the Attabad Lake, and worried at one point that it might mean my Karakorum dreams were doomed never to become reality. But at the back of my mind, I’d wondered how hard it could really be to blast away a few rocks and drain the water away. And couldn’t they just build a temporary road around the edge of the lake?

When I saw it, I realized just how naive I’d been. The valley sides are steep and sheer – any new road would have to be gouged out metre by metre, and that would take years of work, in very difficult conditions. And the lake is enormous. If the dam were dynamited away all in one go (which would, anyway, given its size, be impossible), the water would surge down the Hunza Valley and probably wash away thousands of homes, fields and people. A few days earlier, in Minapin, my host had already shown me how much higher the river was as a result of recent blasts, and he look worried, even though his hotel was several hundred metres up, out of harm’s way. 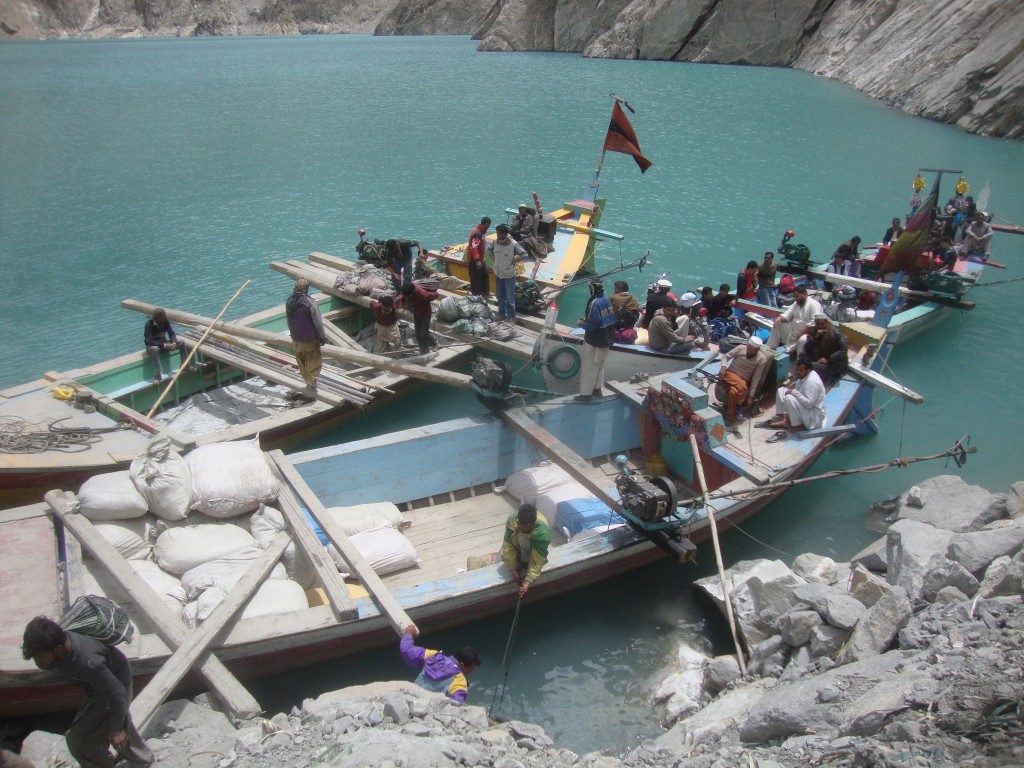 It took over an hour for our boat to cross the lake to Gulmit. By now I was accompanied by a Dutch cyclist named Michael. We’d first met in Islamabad, and hadn’t intended to ride together – in fact we’d had several frank and heartfelt conversations about how we much preferred to travel alone, and how the company of any riding companion will grate intolerably after a few days. But when we found we were leaving Karimabad on the same day, there was little choice but to join forces (there’s only really one route between Pakistan and China, so, as in Turkey and Iran, it’s common to run into the same travellers over and over again, which can be both a delight and a curse). Fortunately we seemed to be quite well suited as riding companions.

The boat’s motor was so loud that conversation was impossible, so we sat happily on the edge of the hull, spooning my mother’s marmalade onto thick brown Hunza bread, gazing at the forbidding rocks and glittering peaks all around us, and realizing just how much the difficult road surface, which demanded so much of our attention, had kept us from enjoying the views. 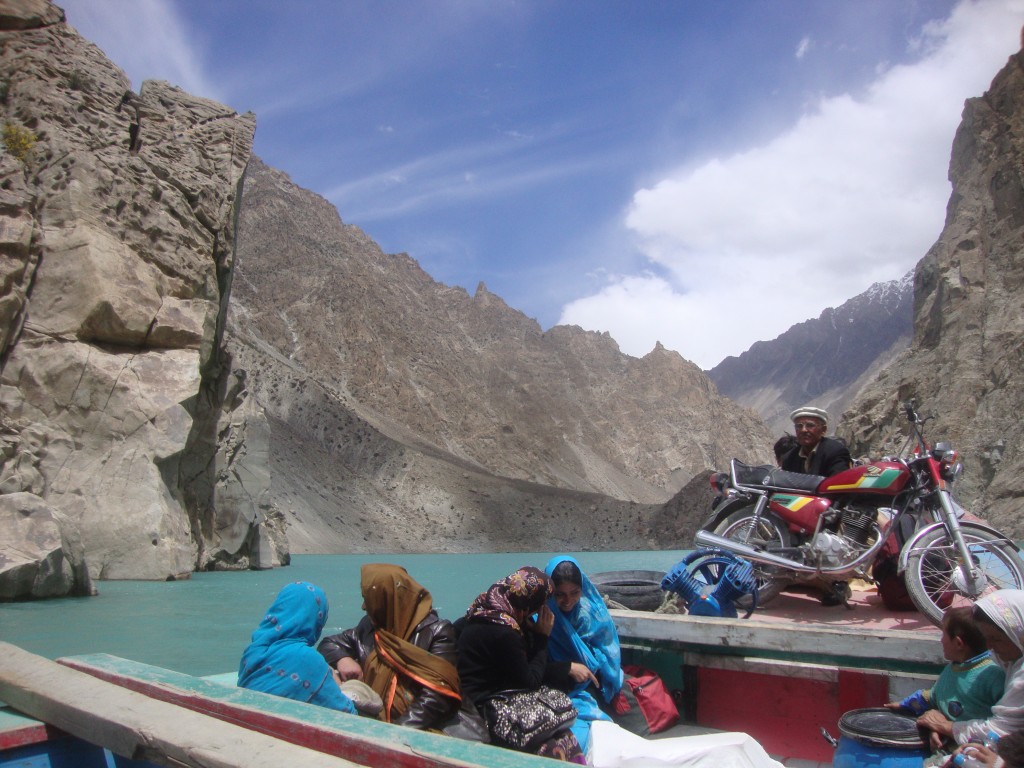 Halfway through the voyage we rounded a spur of rock and glimpsed the Passu Cathedral ahead of us – a tight cluster of jagged peaks, whittled into spires by the strong winds, and one of the most beautiful mountain formations I had ever seen. 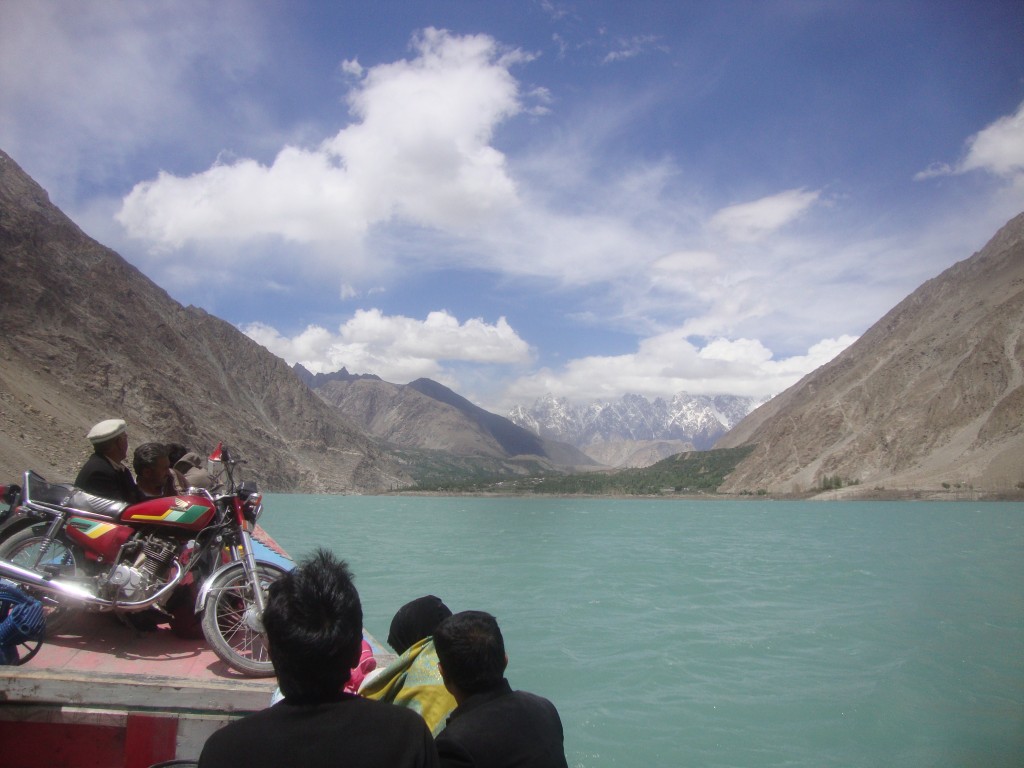 At the other end of the lake there was more sand to push through, but this time plenty of kind (and insistent) gentlemen to help us, and we were soon back up at road level, being bought a cup of tea by the son of the man whose guesthouse we were planning on staying in that evening and wondering how long it would take us to cover the remaining 15km or so to Passu. 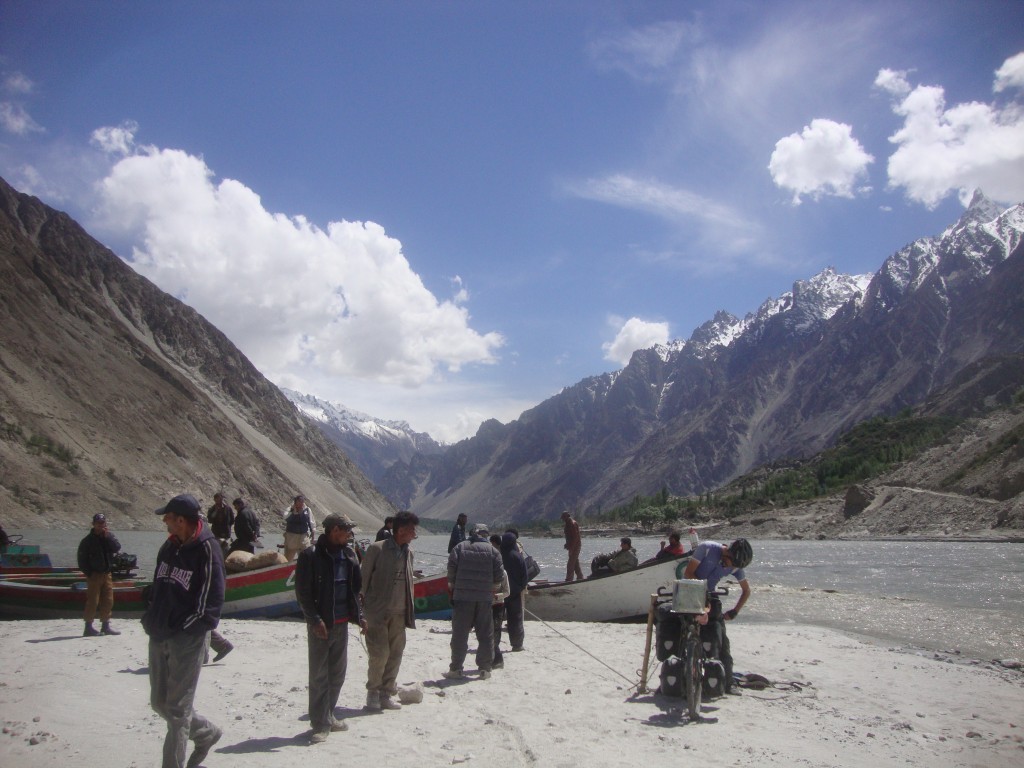 Our daily distances, it must be said, had dwindled to pathetic proportions. I usually consider 100km my bare minimum, but on these roads, going uphill all the way, I was happy to cover 40km, and this would often take me most of the day. Michael, who had a cycle computer, enjoyed depressing me with news of our average speed, distance covered, altitude gained, and so forth. The totals were never very encouraging.

But somehow, as I sat there in the tiny makeshift teashop, little more than a shack with a sandy floor, I felt that elusive warm glow of exhilaration and achievement stealing over me. It made no sense at all. This was a glow that belonged at the end of a long hard ride, with all the day’s trials safely behind me and nothing but food and bed in front of me. It had no business showing its face halfway through the day, when I was already hot, sweaty, dusty and exhausted and yet had several hours more riding ahead of me.

I beamed idiotically at Michael and tried to explain it. It was my uneasy suspicion that perhaps I am, after all, in my element during these times of hardship and, much as the lazy side of me longs to linger in the comfort of my sleeping bag, the cosy backpacker hostel and other people’s spare rooms, I actually thrive on difficulty and discomfort, on dirt and dust and not knowing when my next shower will be, on sweat and sunburn and cold toes and frozen fingers, on things going wrong and having to fix them, on the furies and frustrations of steep hills, wrong turns, bumpy roads, mud and sand and gravel, headwinds and hailstorms. Perhaps I had spent too long sitting around enjoying the luxuries of Islamabad. It was wonderful to be back on the road.

And, as ever, the scenery of the Karakorums made up for any shortfall in my own comfort and achievements. I really mean that. Just look at this. 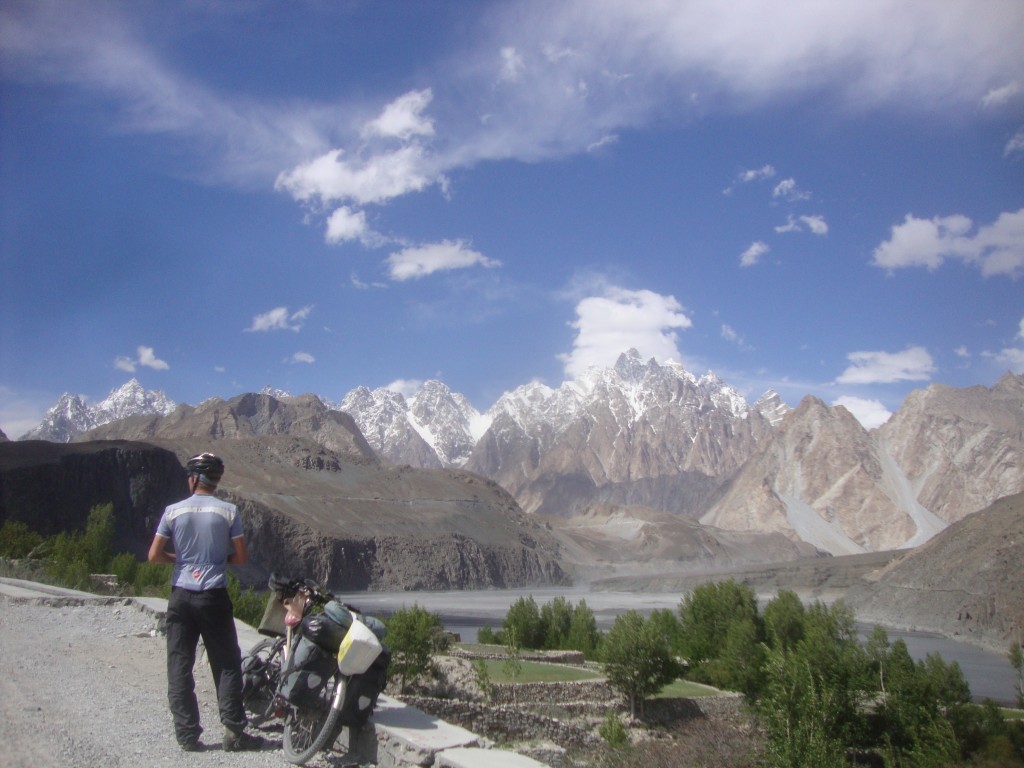 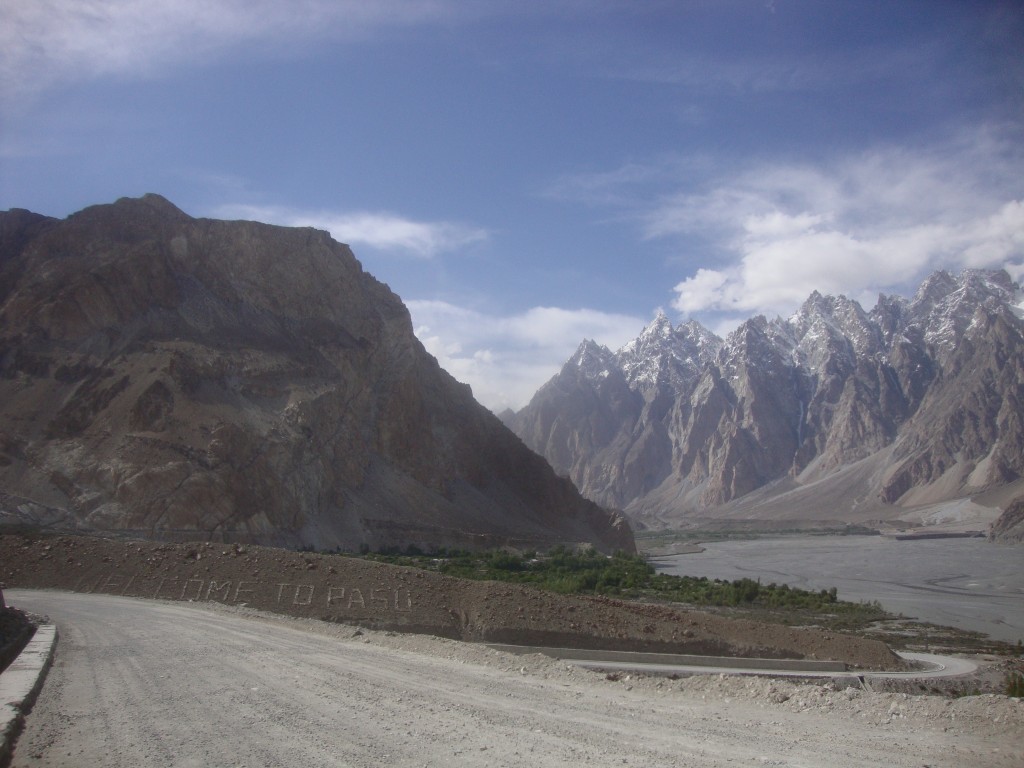 I’ll calm down soon, I promise.