It’s been a lovely month off, but I am more than ready to be back on the road, and back on my own.

It’s difficult to describe the rhythms of a trip like this to the uninitiated – or at least, they’re often surprised when I tell them that the actually cycling is by far the easiest part of this adventure. Life on the road is gloriously simple. You ride, you eat, you sleep, and none of those things is very difficult to accomplish, especially once you’ve discovered that most people you meet along the way are keen – sometimes over-keen – to help you in any way they can.

The hard bit, for me at any rate, is all the planning and admin and fixing and sorting that has to be got through before I can let myself loose on the road. I know, I know, you’re heard it before. So I won’t go into any more detail here than to say that that my recent To Do lists have been of biblical proportions.

But I’ve faced greater challenges of late than just filling the forms for my next visa and getting round to replacing my brake blocks. There was the challenge of travelling with my parents, for one thing – a challenge caused not so much by personality clashes as by the bewildering logistics of transporting three people, two bicycles and eleven pieces of luggage (seven were mine: four panniers, a backpack, a tent and a barbag) around the Northern Areas of Pakistan, in an increasingly absurd series of buses, jeeps, minibuses, taxis, Suzukis and rickshaws. The bikes could be ridden, of course, some of the time, but for a while Dad was ill and couldn’t cycle, and then there was the bit where we and all our luggage had to be transported all the way from Khanian down to Lahore. (It took six different vehicles, two days, and a little more assistance than we necessarily required from the police in Abbottabad, where we had foolishly gone for a stroll around town on the anniversary of the day Bin Laden was found there.)

I don’t know how we’d have survived were it not for the helpfulness and the ingenuity of the Pakistanis we met along the way. Whenever we tumbled out of one vehicle, hot, sweaty and panicking slightly as we frantically counted up our luggage and made sure that neither of the bikes had been damaged in transit, kind souls would descend to help us locate and board the next conveyance and, no matter how little space there was, somehow we and our possessions would be shoehorned in. My poor bicycle has been strapped to roofracks, roped to the back of jeeps, dismantled and crammed into the boots of cars, and even given pride of place on the back seat (so that Mum and I had to somehow insert ourselves in around it). 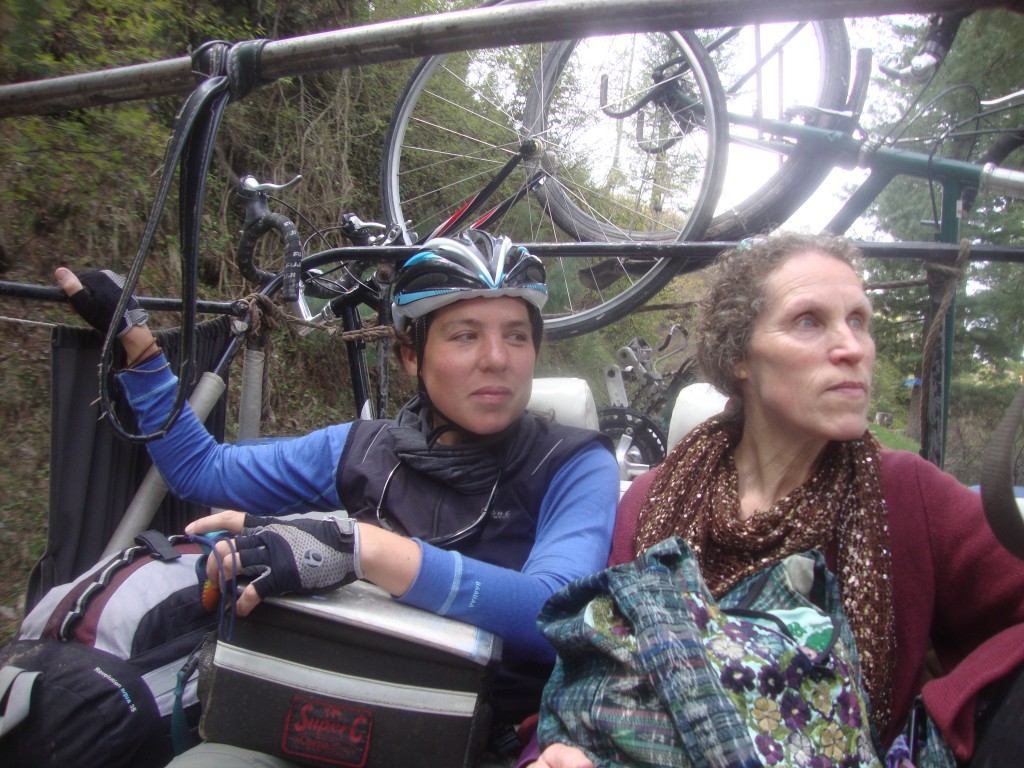 I couldn’t help but compare the can-do attitude of Pakistani taxi drivers to that of their British counterparts. If I tried to fill a London black cab with two parents, two bicycles and eleven bulky pieces of luggage, the driver would tut, and shake his head, and suck his teeth, and refuse to even contemplate cramming it all in. And if he did, he’d then charge us a lot more for all the lifting and shoving he’d have to do to accomplish this. And then find some minuscule scratch on his paintwork possibly caused by my bike, and charge us for that too. But for the drivers we flagged down on the back roads of Pakistan, failure was not an option. With the help of optimism, ingenuity, string and usually several passersby, they’d somehow wrestle everything into – or onto – the vehicle, give it a good shake to make sure nothing was going to fly off halfway down the hill, convince my mother and I to climb into whatever small space they’d left for us in amongst the luggage (Dad, being the leggiest and also the most vocal complainer, would get the front seat), and set off, the engine juddering and growling with all the extra weight. And of course, they’d charge us next-to-nothing. 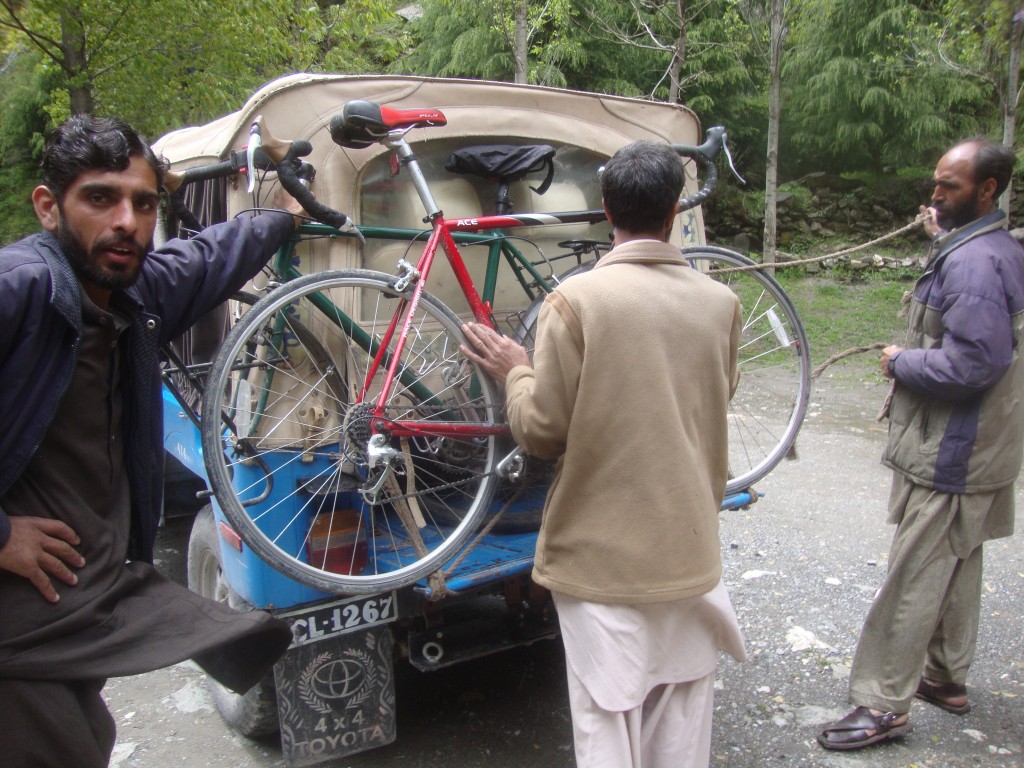 One of the many things I’ve come to admire about Pakistanis is their ability to make do with what little they have, and to get things done with the scantest of resources, often in circumstances where we helpless British would gloomily conclude a solution to be impossible. During a recce of the road up to Naran, our driver managed to break the drive shaft of his jeep, trying to get us over a snowdrift (more of a glacier really), and it started bleeding thick black oil all over the road. You can’t just call out the AA in Pakistan, and we were beginning to think about flagging down another jeep, or attempting the long long walk back to our hotel, but the driver set about his repairs with characteristic optimism, managed to bodge the thing together with, of all things, a piece of chewing gum, limped several miles to the nearest town, sent us all to drink tea for half an hour while he fixed it properly – and then got us home in one piece. 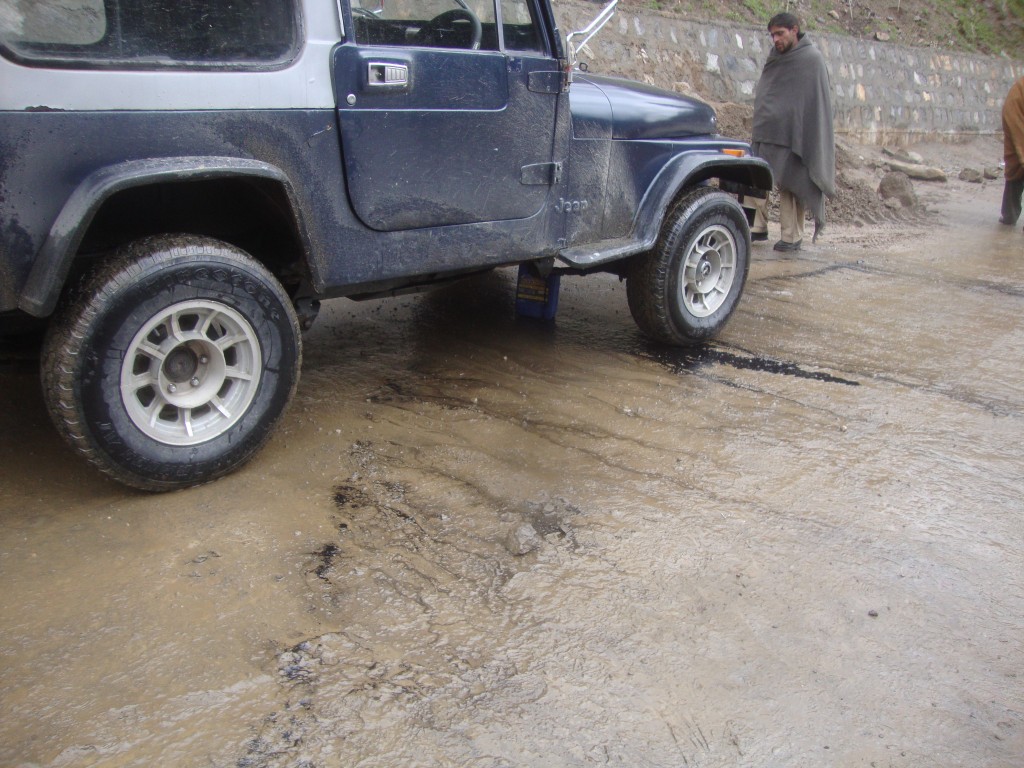 Pakistan is infamous for corruption, and people inside and outside the country regularly bemoan the fact that the lion’s share of its resources and political influence remain in the hands of a few powerful families. That’s as may be. But there’s a flipside too. If you need to get something done, someone you know will almost certainly have a cousin, or a brother-in-law, or a schoolfriend, who’s able to help. I can give you endless examples of this. The day I arrived in Lahore, Moin had convinced some of his endless contacts to arrange a welcome reception for me at the National Velodrome. (In typical Pakistani style, he didn’t make the phonecalls till the night before, and the whole event, with all its printed banners and engraved trophies, was pulled together in 24 hours – and as Moin points out, the organizer will have been drinking tea for at least seven of those hours, and sleeping for fifteen, so it was effectively two hours’ work. In the UK this kind of thing would take at least six weeks.) 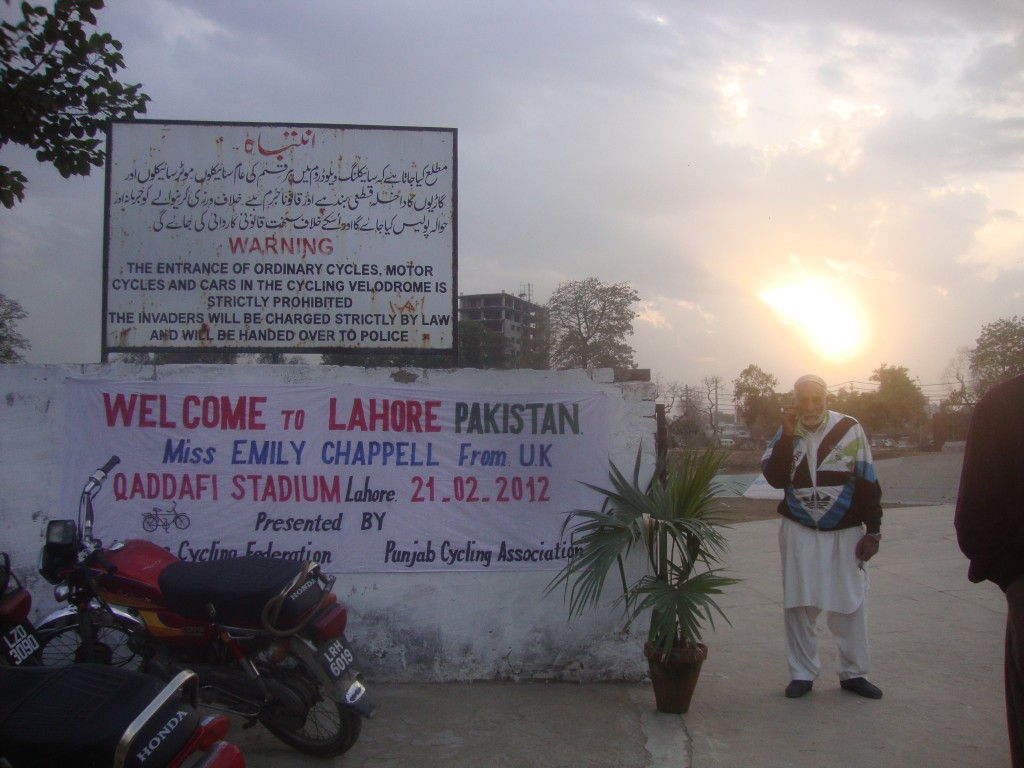 At the reception I met a former Olympic cyclist who’s now a rickshaw driver (photo above), and Haroon, the team mechanic, who also happens to have won the Tour of Pakistan three times, and was the first Pakistani to win a gold medal at the South Asian Games. Haroon gave Moin his number, and told me to get in touch if I needed any help with my bike while I was there. And, being as befuddled as I was by all the film crews and speeches, I forgot all about this until last week, when I snapped a driveside spoke on my rear wheel, realized I’d have to remove the cassette in order to replace it, and discovered that a Shimano lockring remover is a completely unknown quantity in most of Pakistan (and cursed myself for not having one – I’m already carrying over 7kg of tools and spares, so what difference would a few more grams make?).

So after several fruitless visits to local bike shops whose inability to remove my cassette was matched by the worrying enthusiasm with which they reached for their hammer, I headed back to Lahore, and got Moin to call Haroon. He and a colleague (also an SA Games gold medallist) came round with their tools the very next morning, and within ten minutes had whipped off the cassette, replaced the spoke, retrued the wheel and put it all back together again. I had hoped to do it myself, but it would have taken me most of the day, and they were such evident experts that it made sense just to stop interfering and let them get on with it. 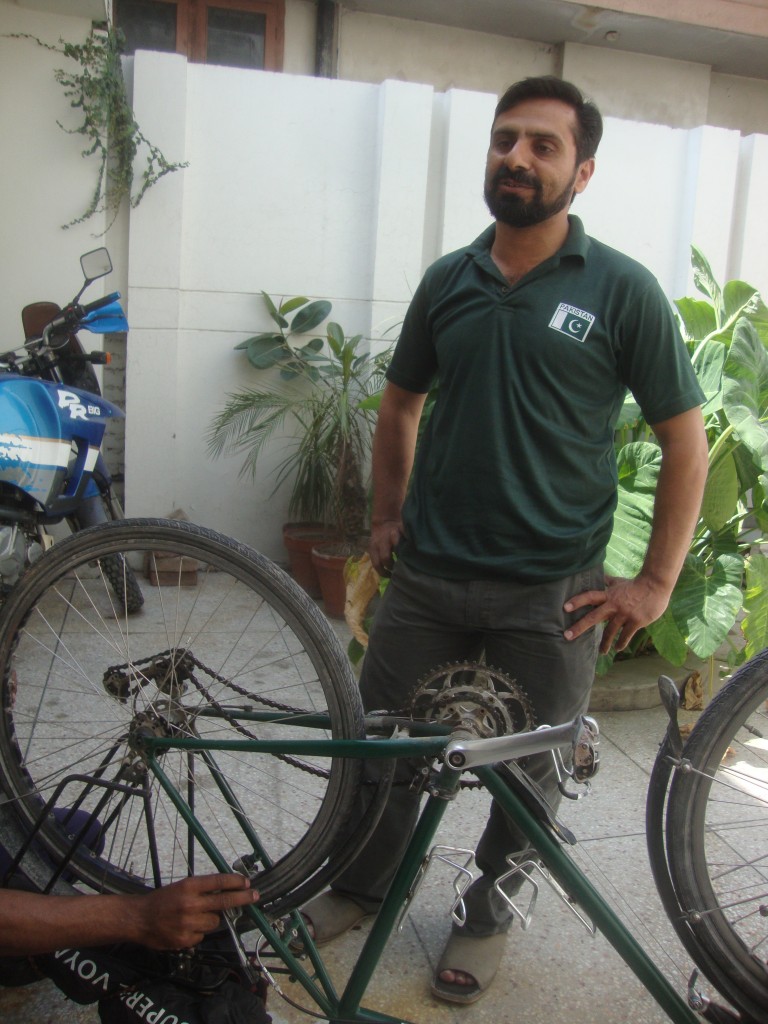 They politely but firmly refused any suggestion of payment, handed me the lockring tool and a pair of armwarmers in their team colours as a gift, and wished me well for the rest of my journey. And I realized this was the equivalent of a cyclist breaking down in the UK, and having Chris Hoy or Mark Cavendish drop round with their toolkit.

Previous Article Passengers
Next Article The next few headaches