Posted in off the road people

A school for change

Just after we descended from Sri Paye, a cool 2962m above sea level, and the highest any of us had even been, Mum and Dad and I were accosted by the owner of the endearingly dilapidated resort we were staying in, sat down and given a cup of tea. 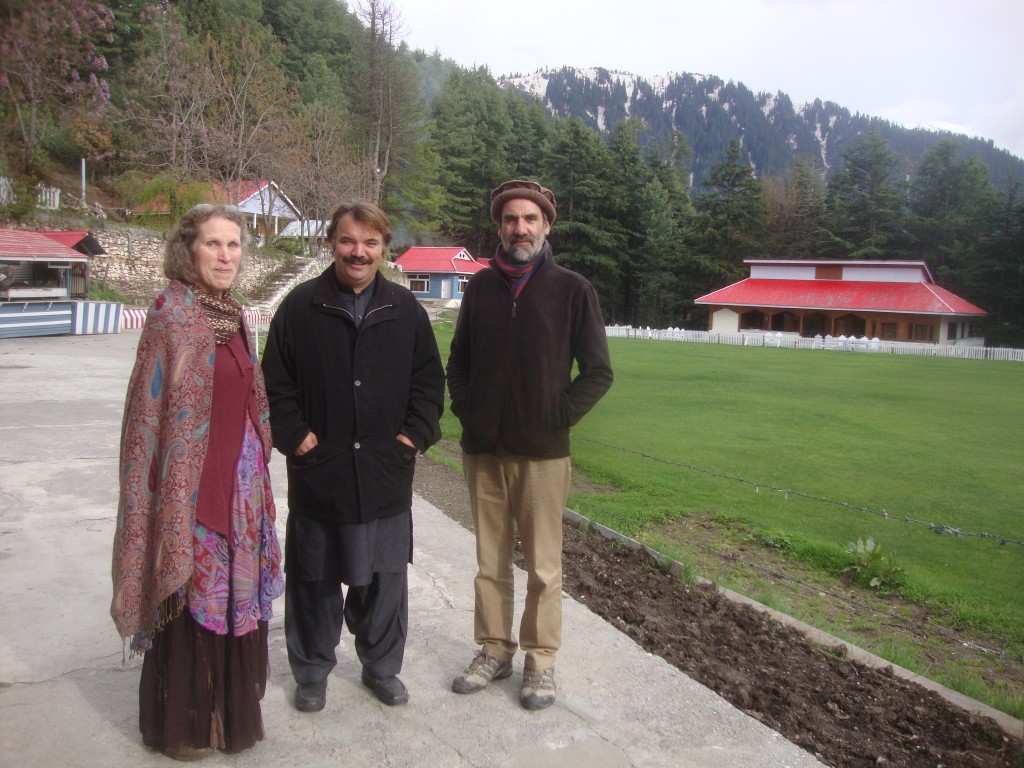 Since 9/11, foreign tourists in Pakistan have become a rarity, meaning that the intrepid few who do visit the country are subjected to endless – and sometimes overwhelming – curiosity, hospitality and offers of help, advice or tea. Several times a day we would be stopped by some friendly local, who would welcome us to their country in impeccable English, ask us what we thought of Pakistan, and offer to help us in any way we needed. Although I’m very reluctant to give my number out to men (having acquired an impressive crop of stalkers in the last couple of months), quite a few of those who managed to get hold of it just wanted to phone up now and again to check everything was OK. One chap I met on the road between Murree and Abbottabad even offered to call ahead and sort out my hotels for me.

The heartbreaking thing about these encounters was that most Pakistanis are well aware of how their country is portrayed by the Western media. They would ask us pointedly and pleadingly if we felt safe here, and how our experience of Pakistan contrasted with what we had been led to expect. They would go out of their way to convince us that, although, yes, the country has its problems, and some of them are quite serious, the vast majority of Pakistanis are friendly, intelligent, hospitable, and peace-loving. Having met hundreds of them over the past few months, and having so far not been even slightly kidnapped, bombed or murdered, I cannot help but think they’re right, and sympathize with the frustration they must feel about being so grossly misrepresented to the rest of the world.

Junaid, the owner of our hotel, was no exception. In fact, to my mind he exemplifies all that is excellent about Pakistanis. He spent a few years studying in upstate New York, but, rather than staying to pursue the American Dream, as we assume all immigrants would want to do, given half the chance, he returned to Pakistan, to do his bit for his country – much like Moin Khan, and so many of the other people I’ve met in Lahore and Islamabad. He lost several family members, including his brother, in the 2005 earthquake, but, committed to his community and determined to bring something good out of something bad, he and some friends quickly established the Kaghan Memorial School, an awe-inspiring project that survives entirely through charitable donations and currently provides a world-class education (along with transport and medical care) to over three hundred local children.

The children are taught in English, by a mixture of local and international teachers, the aim being, Junaid explained, to put them on an equal footing with children educated in places like Islamabad and Lahore, and to give them the opportunity to become something other than shopkeepers and rickshaw drivers like their parents. It’s been a struggle in many ways. Getting a project like this off the ground isn’t easy, and sustaining it is even harder. Junaid pointed out that many of the pledges made by individuals and organizations in the immediate aftermath of the earthquake ultimately failed to materialize. It’s very easy to promise money – the challenge is finding a way to turn donations into actual functional projects, given the devastation of the area and its population. The Kaghan Valley isn’t an easy place to work at the best of times – it’s remote and hard to get to, and subject to constant landslides and floods.

Another challenge has been sustaining the funding for the five years (and counting) that the school’s been running. As we all know, the world tends to forget tragedies like earthquakes within a few months of the initial news blitz, even though it will take those on the ground at least a generation to get themselves back on their feet, economically, socially and psychologically.

“So how long do you think it’ll take,” asked my father, “before things are back to the way they were the day before the earthquake?”

“Oh, that’ll never happen,” answered Junaid. And we all realized how naive we’d been to think that things could just be picked up and put back together again. After such devastation, how could that be possible? Much like Bam, which haunted me so much a few months ago, the Kaghan Valley will always bear the scars of what happened in 2005. The community is rebuilding itself around them and in spite of them. Some lessons have been learned. (There are significant differences between pre-earthquake and post-earthquake building styles, for example.) Some things will never be resolved. (Many of the children at the school lost one or both parents in the earthquake.)

But of course, once the earthquake had disappeared from the headlines, most of the world forgot all about Kaghan, making it all the more difficult to muster the sustained annual funding necessary to keep the school running – and growing. Junaid and the other trustees employ five full-time volunteers in Islamabad, whose job it is to schmooze every company, charity and international organization they can think of, to try and raise money for the school. There have been some significant successes, including a computer lab donated by IBM, a playground supplied by UNICEF, and classrooms funded by diplomatic missions from various nations. But what the project really needs is cold hard cash – to pay the salaries of its almost 40 staff, to fuel the buses that ferry the children in from the upper and lower reaches of the valley, to buy medical supplies and to provide a daily meal for the children, every single one of whom, according to the most recent medical assessment, is suffering from malnutrition.

So the school runs a sponsor-a-child programme – for $500 a year, foreigners can cover the educational, nutritional and medical expenses of one child. At the moment roughly 50% of the children are sponsored, and the Kaghan Memorial Trust is trying hard to increase this. Another huge fundraiser is – and this was very exciting for me – an international mountain bike race that has been held in the Kaghan Valley for the last three years (photos here). This, of course, has the added bonus of bringing Westerners out to Pakistan, to witness things first hand, and for a practical demonstration of how much more there is to the country than doom and gloom and terrorism.

Of course, we were easily talked into paying a visit to the school. And all three of us were utterly captivated. These children can’t be easy to teach – they are all malnourished, many of them suffer from birth defects, and many of them will have illiterate parents – and yet, within five years of the school’s foundation, they are fluent in English, and falling over themselves to practice it. Wherever we went we were followed by crowds of little charmers, firing non-stop questions: 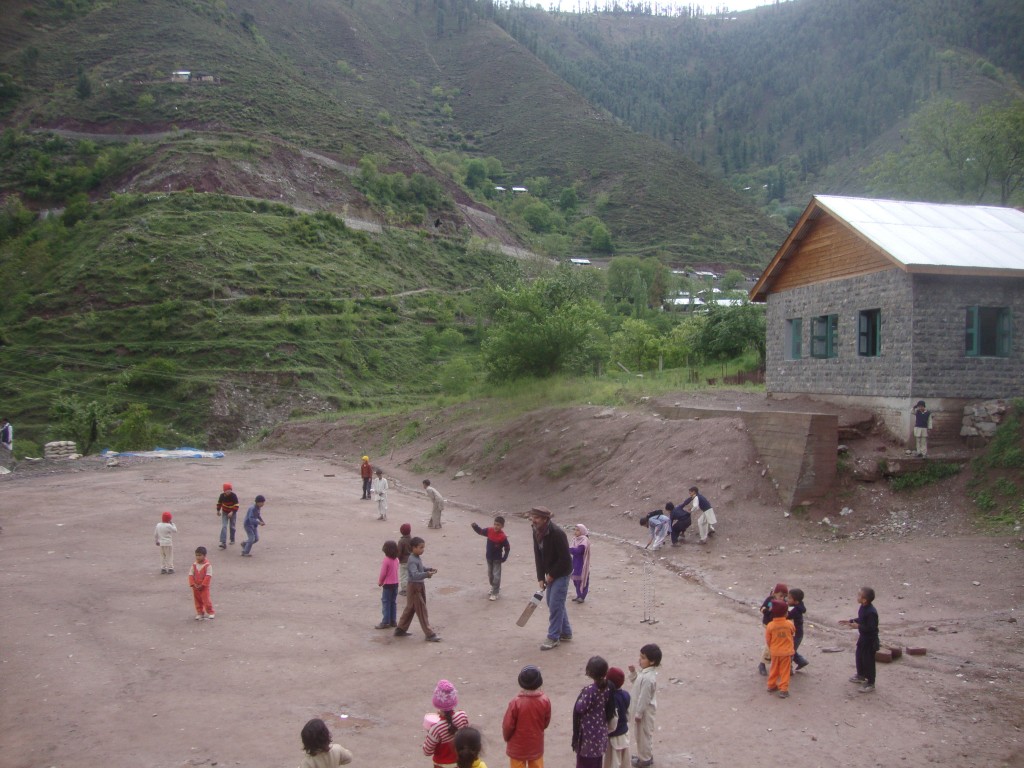 When my mother read The Hungry Caterpillar to a class of nine-year-olds they all shouted out with excitement when the caterpillar turned himself into a chrysalis, since they’d learned about this just the week before. When she sang them a song, they picked up the words and actions so quickly that half of them were joining in the second time round. At break time my father was hustled off to play cricket with the boys, while Mum and I were mobbed by girls, asking us endless questions, telling us all about their lives and families and studies, and trying to pull us in eight difference directions at once. 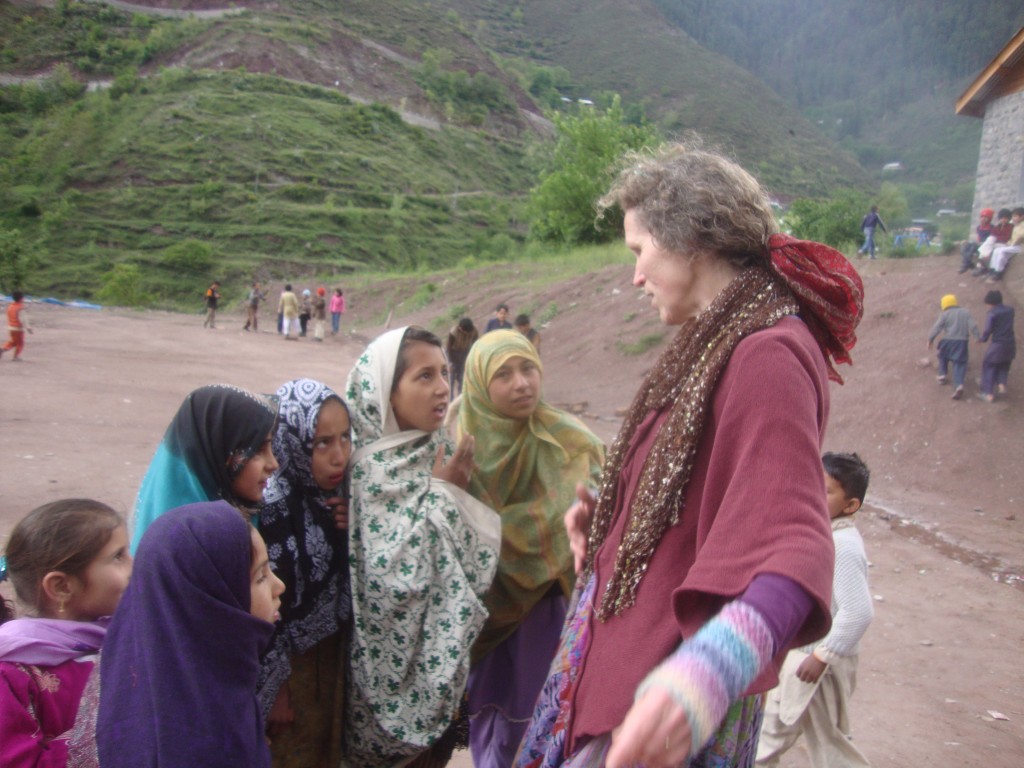 I’m not a particularly child-friendly person, but I found I was grinning from ear to ear the entire time we were there. And some of the kids were so bright and intelligent and well-spoken that it almost broke my heart. Will they really be able to compete on an equal footing with the city kids one day? Will they ever get to university? Or will they just become very well-educated shopkeepers and rickshaw drivers? I found myself wanting to scoop one particular little chatterbox up into my panniers, and take her back to the UK with me. And to come back in ten or fifteen years’ time, and see what’s become of them all. 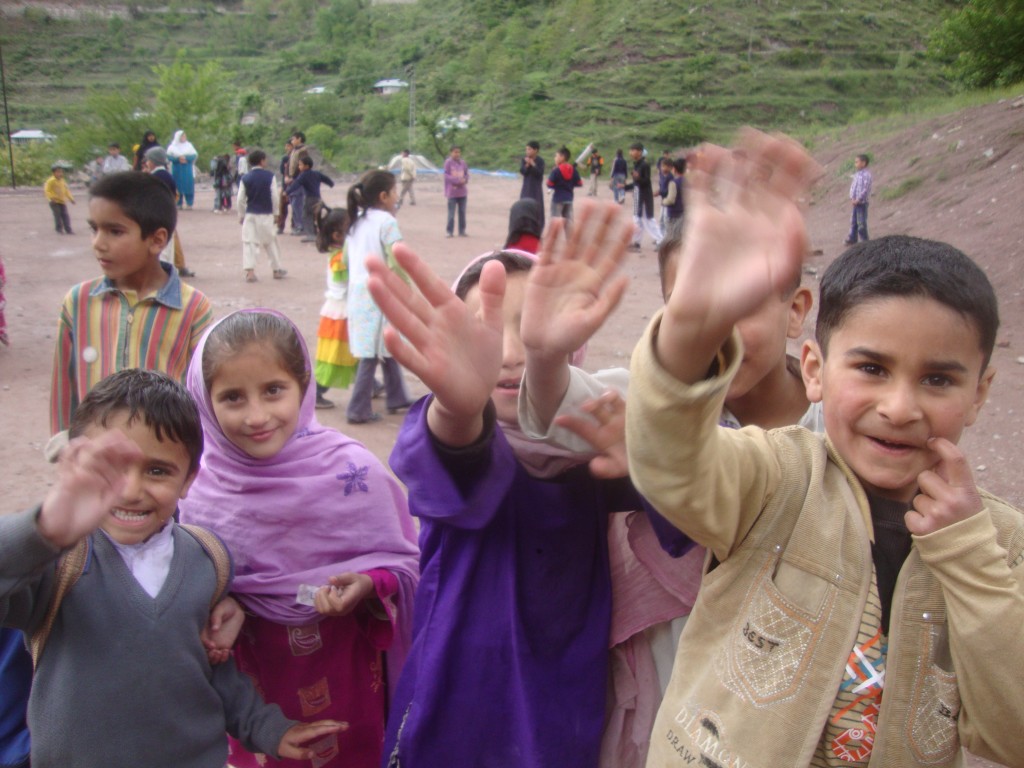 Previous Article A reassuring update
Next Article Grounded in Gilgit