This evening I had the great pleasure of dining with Moin Khan, who’s now in the home stretch of his epic motorcycle journey from San Francisco to his home in Lahore. Moin and I also crossed paths in Munich back in September, but I didn’t find out he was in town until he’d already left, and since he covers the same distance in an hour that I cover in a day, it seemed pretty unlikely that we’d run into each other further down the road, as sometimes happens with fellow cycle tourists. 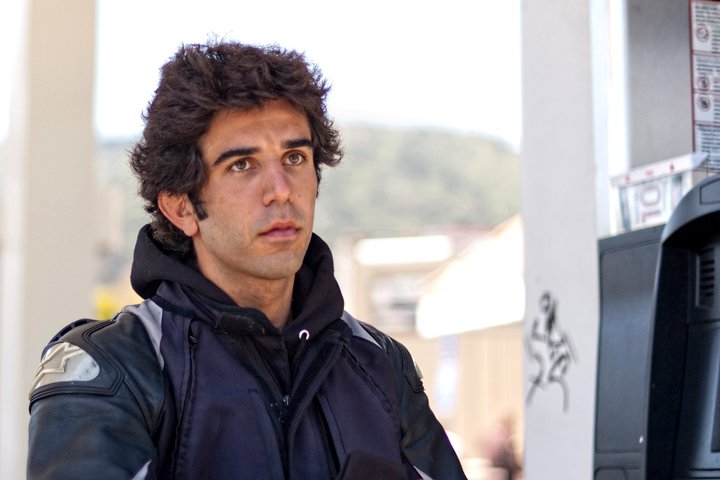 But yesterday, to my surprise, I found out that Moin had just arrived in Ankara, somehow now a day behind me. He’d been delayed for over a month in Romania, hospitalized after a crash that fractured two ribs and his right thumb, and caused hundreds of dollars’ worth of damage to his bike. Fortunately, his guardian angels were just as reliable as mine have been so far, and he was looked after by locals, while members of a biker forum back in California clubbed together to ship him out all the parts he needed to get his bike back on the road. A few days ago he crossed into Turkey, and now all that stands between him and his hometown is an expired Iranian visa and whatever obstacles Eastern Turkey and Balochistan choose to throw in his path.

I was intrigued to talk to Moin about his adventure because, unlike most people I know who set out on a journey like this, his aim is not to raise thousands of pounds for charity (like Brake The Cycle and The Cycle Diaries), or mere personal indulgence (like, erm, me), but rather to change the perception of his home country – Pakistan – in the eyes of the world. In 2005, Moin went to study in San Francisco, and was quickly dismayed by the entirely negative portrayal of Pakistan in the foreign press. As he told me, over our cheap köfte and pilav, when he was growing up in Lahore he never encountered any violence, never saw people walking the street with bombs strapped to them, never witnessed the gun battles that were a fact of life in downtown San Francisco. Yet, if the international media is to be believed, his entire country is nothing but a seething mass of terrorism, fundamentalism, corruption and abject poverty. Moin found himself wishing that, just for once, some good news would come out of Pakistan. And after a couple of years, he decided to take matters into his own hands.

His project – titled A Different Agenda – has been an extraordinary success, his Facebook page now has fans all over the world, including a primary school teacher in Canada, who spends ten minutes at the beginning of every day updating her class on his progress, and he’s been interviewed by the BBC, featured on the front cover of Romania’s top sports publication, and won enough fame and regard in his home country to ensure him a hero’s welcome when he arrives home, hopefully by the end of this year.

Another reason I was delighted to meet Moin is that I’ve become slightly weary, and slightly suspicious, of the all-too-predictable pedigree of most ’round-the-world’ adventurers. Almost all the famous long-distance cyclists I can think of, for example, are educated middle-class white guys (which is not to say that I don’t consider many of them my friends, and several of them my heroes), and on the couple of occasions when I visited the Royal Geographical Society last year, I couldn’t help but notice the preponderance of double-barrelled names on the nametags, and the distinct lack of anyone obviously from a working class or non-white background. There weren’t even all that many women.

I began to worry that the inclination, ability and opportunity to go on an expedition like this have more to do with money, privilege and class than simply an enquiring mind and an adventurous spirit. After all, it’s not that people from other social and ethnic groups don’t travel. But they’re much less likely to travel just for the pure enjoyment of it, and more likely to be forced by circumstance, be it to earn more money, to escape persecution, or to give their family a better life. A friend of mine, for all of the above reasons, travelled as a stowaway in a lorry from Iran to the UK a few years ago. I suspect that lying curled up in a sealed box for ten days, not knowing what he’d encounter at the end of his journey, or even where that might be, must have been far more physically and psychologically difficult than riding to Iran on a bicycle (which I hope I’ll have done by next month), but I don’t see anyone wreathing him in laurels, or booking him for after-dinner speeches. And even for people who migrate in more conventional ways, and start from scratch in a brand new country, often with no possibility of return, I feel life must be far more challenging than it is for me, with my comfortable life-savings, international support network and ability to book myself onto a flight and just go home if things don’t turn out how I’d hoped.

Is this just unproductive white guilt? Maybe. I think it might also be a reaction to being constantly told that my own project is ‘amazing’, when really all I do most days is ride my bike, eat and sleep. I don’t have a coherent mission or vision, or even a fundraising goal. My trip is, at best, a voyage of personal discovery; at worst a selfish indulgence. I might momentarily entertain or inspire a few people who stumble across this blog, but I certainly won’t push any boundaries, break any stereotypes, or change the world – unlike Moin Khan. And unlike the two gentlemen who cycled from Cape Town to Mecca last year for their Hajj pilgrimage. And…

…are there any others I should know about?

Edit: Elvis Munis. What a hero.

Previous Article The road to Ankara
Next Article Baby photos