Cutting winter down to size

Cutting winter down to size Posted on November 13, 20115 Comments

Planning and preparation don’t hold the same joy for me that they do for some adventurers, but sometimes they offer a degree of comfort. As I’ve discussed elsewhere, I always feel nervous about whatever challenges lie immediately ahead, and have found that this nervousness is reliably diminished by a few hours of research, the purchase of a map, and a conversation or two with people who’ve travelled there before.

My current planning headache is Balochistan – the massive desert province of Pakistan that lies east of Iran and south of Afghanistan, and offers the most direct route into South Asia.* It’s currently seething with Taliban militants, Afghan heroin smugglers, beleaguered Nato convoys, shady ISI assassins and increasingly desperate Balochi nationalists. Often, as you approach a troubled area, or investigate it more closely, a lot of its bad reputation will turn out to have been mere scaremongering. So far this hasn’t happened with Balochistan, and the more I learn about it, the more wary I am of setting foot there, even though this will mean forfeiting the Pakistan visa I spend ridiculous amounts of time and money acquiring.

But enough of that. First I have to get through eastern Turkey, where the average temperature in winter is well below zero.

“Will it be cold?” mused an ex-army friend I spoke to a day into my trip. “Well… let’s just say that’s where I did my Arctic training!”

I like cold weather. But this will be colder than anything I’ve experienced before, and although I’m naively looking forward to it, I’m also expecting to suffer a lot more than I ever did in London’s paltry winters, and to emerge older, wiser, sadder and tougher. And always, at the back of my mind, is the question of what will happen if I simply can’t hack it. Maybe this will be where I finally reach my limit, spend the rest of my money on a five-star hotel, and then fly back to London and become a management consultant.

Yesterday, these misgivings were almost entirely alleviated by a visit to the excellent Gorgona in Veliko Tarnovo, which I’d been looking forward to as possibly the last decent outdoor shop I’ll find before I set off into Asia. 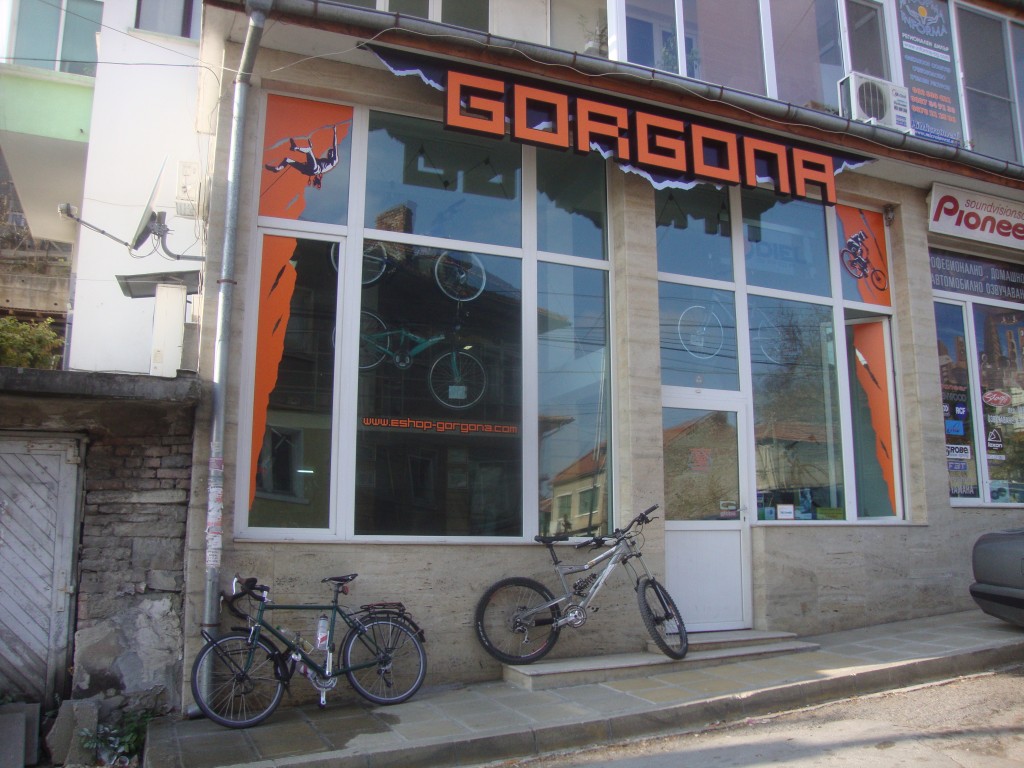 I wasn’t disappointed. In fact, my expectations were considerably exceeded when I turned up on Friday afternoon to discover not only an ample collection of well-priced fleeces, down jackets, gloves, socks and bivy bags (in fact, everything on my list) – but also a well-stocked bike section, with all the SRAM, Shimano, Cateye and KMC my heart could desire, and a workshop full of Park tools. 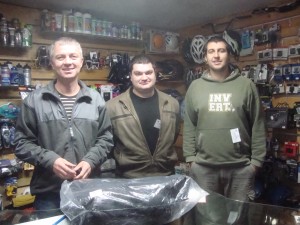 Within minutes the staff had appreciatively clocked my SIDIs and cyclist’s tan, and started asking me where my bike was. I knew I was among friends. So the following morning I rode over there, bought the  jacket I’d been dithering over, and spent a companionable couple of hours giving the bike a very thorough clean (which I do far too rarely, especially given how satisfying it is to see sparkling silver chain rings emerge from under all the black sludge), and taking advantage of their workshop to make sure all the perishables and moving parts were up to scratch, and that nothing was about to wear out and leave me stranded in a blizzard in the middle of nowhere.

(Incidentally, I’m now around 3,000 miles in, and all I’ve had to do is fix two punctures and replace my brake pads once. This either means I’m extremely lucky, or that something major is due to go wrong.)

Although they’ve been the site of much embarrassment in the past, I find bike shops immensely comforting places to be – not only because of their capacity to solve most of my life’s most urgent problems, but because no matter where I am, I can walk into a bike shop and feel like I’m among my own tribe again. 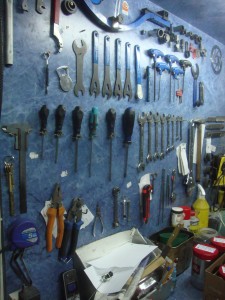 I knelt outside the shop for the best part of an hour, beavering away with a can of degreaser, a toothbrush and a 5mm allen key, and Dimitar, the mechanic, popped out periodically to check how I was getting on. When I’d finished, he showed me through to the staff toilet to wash the oil off my hands.

Back in London, three months and three thousand miles ago, I’d often spend my Saturday mornings in a similar fashion, buying parts and doing repairs in Brixton Cycles, and then hanging around for hours to ask all my stupid questions about every aspect of cycle touring, from what sort of bottom bracket to buy to what to do when my rim blows out 100 miles from the nearest settlement. (Square taper and gaffer tape were the answers, in case you’re interested.) The support they provided was just as much psychological as mechanical.

And I left Gorgona full of the familiar feeling of confidence and relief with which I’d usually ride home from Brixton. The bike is running like a charm. And I am now, as far as I can make out, kitted out from head to toe with merino, fleece, goose down, neoprene and gore tex. Winter will still hurt. But human beings have endured far worse weather with far less kit and, as I constantly remind myself, if they survived it then there’s at least a chance that I will too.

*The other options are to go through Afghanistan (so dangerous that it is, in fact, rarely considered an option at all), to divert thousands of miles through Turkmenistan, Uzbekistan and Tajikistan, or to give in and take a flight. I’m currently investigating the possibility of taking a boat from Chabahar in Iran, possibly via Muscat in Oman, and trying to enter via Gwadar port, but this isn’t looking promising. Any leads or suggestions would be most welcome.

Previous Article Guardian angels
Next Article The end of Europe