It’s just too big. There are lots of reasons, and they all link together in a complex way that I haven’t quite managed to unravel yet. And maybe I never will. But I keep trying. Here’s today’s attempt.

A couple of weeks ago, on the same day, the Independent published an interview with Victoria Pendleton and ShortList published one with Usain Bolt. Both are expected to win gold medals at next year’s Olympics, but apart from that they couldn’t be more different. Usain Bolt is well known for being easygoing (he wants to be remembered as “a fun-loving laid-back person – the man who brought joy to track and field”) and unapologetically self-confident (“I would be a very good cricketer if I was a professional now. I think I would probably have been the best, in fact”).

Pendleton, on the other hand, is “riddled with self-doubt and insecurity”, endlessly finding fault with her own performance, and already cringing under the pressure of the Olympics next summer. She has nightmares of being pursued by a monster “who’s got a big 2012 written all over it”, and feels that she’s striving for a goal she can never attain: “I don’t just want to be OK at this, I want to be the best at it, and I’ve never achieved that in my mind.”

For me, this illustrates the differences between male and female high achievers. I know plenty of both, and as a general rule, the male ones are far more likely to recognize their own merit, to expect success, and to pursue their goals and ambitions without stopping to worry about whether they deserve them, or are capable of achieving them. And women spend a lot more time doubting their own abilities – even when they have a gold medal or a world record to their name they will find a way of dismissing or devaluing their achievements, and many will be stopped from achieving anything at all by the belief that they are incapable of succeeding.

Of course, this is a generalization, and I’m sure we can all name numerous confident, self-assured women and insecure, self-doubting men. In fact, as round-the-world cyclist Alastair Humphreys sets off from Ushuaia to ride the Pan-American Highway to Alaska, he feels intimidated and reluctant: “The old self-doubt rose through me, but I was determined not to cry.” It’s a sentiment I know all too well.

And there are loads of other factors that might affect a person’s confidence and self-belief. Class and wealth and education make a huge difference. I am by no means at the bottom of the scale for any of these, but I still spent most of my university years wishing I had the confidence of all the privately educated young men who would simply decide they wanted to study in New York for a year (or whatever), apply for a scholarship, get it, and get on with it. I knew I was every bit as good as them; at the same time, I couldn’t believe I’d ever be capable of that sort of thing, so I never even tried.

And sadly, this is a recurring theme. Although I’ve had a pretty good life so far, nonetheless, I’ve missed countless opportunities over the years because I was afraid to accept them, or to pursue them, and assumed I wouldn’t be capable of seeing them through. Over the past two weeks I’ve spent a lot of time thinking about how different my life might have been if I’d never thought “…oh, but I can’t.” There are so many instances that I don’t have room to list them all. Here are just a few.

The latter is actually one of my greatest regrets. I could have had many more years of this career that I love, if I hadn’t assumed it was beyond my abilities.

I still remember the first cycle courier I saw. I was struggling through my first post-uni summer in London, desperately broke, and temping as a receptionist at Viacom (now CBS) on Jamestown Road, having spent the very last of my overdraft on a few cheap H&M shirts and some synthetic pinstripe trousers. Everything was still new to me, and I was fascinated by all the different people who came and went from my reception. I thought it might be quite fun to be one of the guys who delivered sandwiches from a trailer. And then a girl of about my own age appeared on a sleek black bicycle (from what I remember of her posture and cadence, I would guess she was riding fixed, though I didn’t even know such a thing existed back then). She was blonde and petite, and wearing frayed cut-off jeans over her cycling shorts. She leaned her bike against the plate-glass window without even locking it, strode through the revolving doors, briskly handed me an envelope, held out her clipboard for me to sign, and within seconds was back on the bike, standing tall on the pedals for a couple of strokes, and then swooping off towards Oval Road.

I remember very clearly how I felt as I watched her disappear round the corner. I wish I was the sort of person who could do that! I imagined us as opposites – I was sitting placidly behind a reception; she was outside riding her bike around the city. (And back then it was a novelty for me that you could ride a bike in a city.) It never even occurred to me that I could cast off the pinstripes and go and join her, and it wouldn’t for another three years, although as soon as I found out what a cycle courier was, I started talking about wanting to be one.

It turns out I was that sort of person all along, or could have been.

The college I went to was very rich, and had countless funds you could apply to for money to cover research projects, expeditions, language courses, theatre tours, and just about anything else you can think of. I miserably failed to make the most of this.

During my second year I did screw up the courage to put in an application for a grant to go to Delhi and research Indian English, feeling all along like a fraud who knew nothing about linguistic research and was just transparently trying to blag a free holiday. A few weeks later I received a letter from the fund I’d applied to, saying they were interested in my project, but would like more information on a few specific points. By then I’d convinced myself I didn’t stand a chance of winning the grant, much less surviving two months in Delhi and being capable of grown-up independent research, so I didn’t even bother to reply, and resigned myself to another summer of part-time jobs and low-key travel.

Shortly after that I received a cheque from the junior bursar. They’d given me the grant anyway. But by then I was so convinced of my own inability that I never actually cashed it. It would be another two years before I plucked up the courage to go to India (I had wanted to since I was sixteen), and despite all this I actually did have a modestly successful career studying and advising on Indian English language and literature. I wonder how different things might have been if I’d taken the opportunity when it was first offered.

I still have the uncashed cheque. My friend Aleksi came across it last week, when helping himself to my books. I’m embarrassed to look at it. But I’m going to hang onto it, as a reminder to myself – and everyone else – that I shouldn’t waste any more time thinking I’m not capable of things when I quite clearly am. 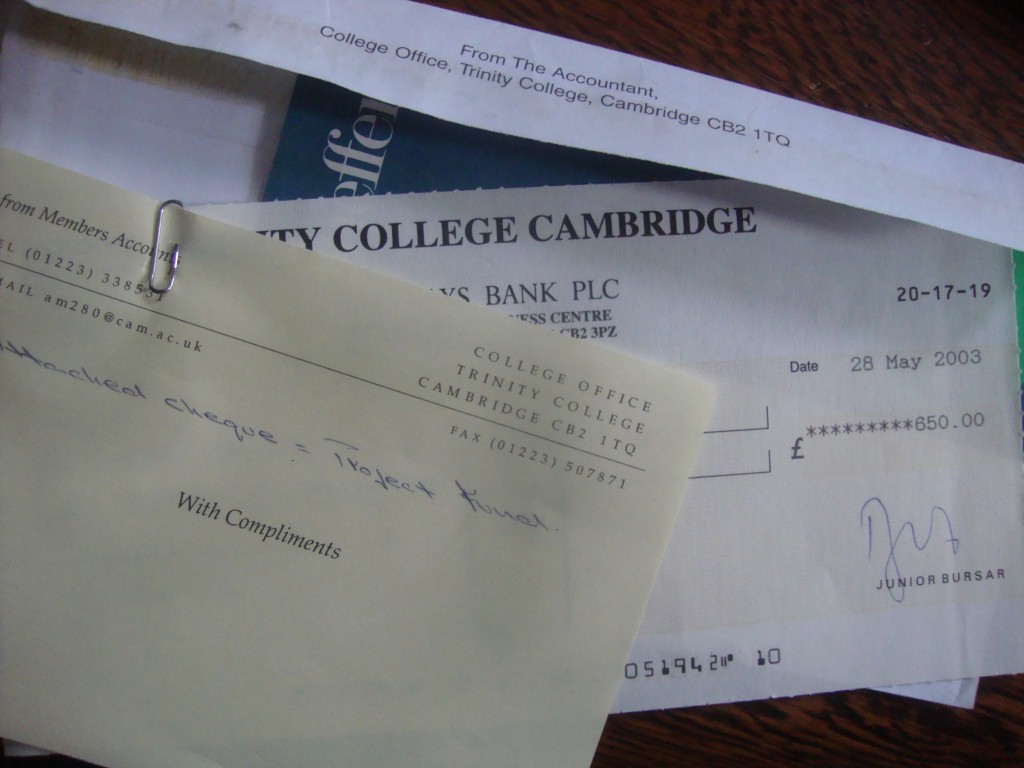 So why am I cycling round the world?

Because I should have done it years ago.

Previous Article About a bike (III)
Next Article Don't read this