In two months’ time I will be feasting my eyes on winding roads and distant horizons. But I’ve spent most of today focussing them very closely on a minute operation taking place with near-surgical precision mere millimetres from my nose.

I promise you’ll see some truly awe-inspiring photographs of landscapes and people and bicycles over the next few years. For now you get a few more of Emily HQ, which today has been devoted to Operation Wheelbuilding. 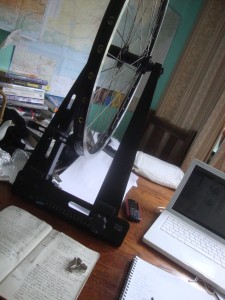 I’m very new to this. For years I was led to believe that building wheels is more of an art than a science, and not something that just anyone can pick up. Most aspects of bicycle mechanics are fairly straightforward – you need to know what size, shape or version of each part you need, where to stick it and how tight to screw it, but once you’ve figured that out you can’t really go wrong.

Wheelbuilding is more like playing the violin. Even though you can master the basics fairly swiftly, it takes years and years of practice before you’re actually any good at it. There are lots of little tricks that you’ll pick up in due course – but the intuition that enables the best wheelbuilders to sense and remedy an almost imperceptible kink in the rim, without even really knowing how they did it, cannot be taught.

I found this when listening to my wheelbuilding tutor trying to explain why I should tighten the spokes in a certain order to straighten out a particular sort of bend. She’s an excellent teacher, and had managed to explain all the methods and mechanics to me in extremely comprehensive detail. But occasionally she was at a loss. She couldn’t explain why she’d tighten these four spokes rather than those two, or why she’d tune this section of the wheel swiftly, and that section slowly, an eighth of a turn of the spoke key at a time. This was deep knowledge, that had been learned through touch and sight and sound rather than through language – much as I’ve found, when manoeuvring myself and my bike through the city, that my body has picked up certain tricks without any input or intervention from my mind. 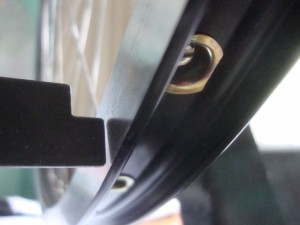 It’s not just about lacing the wheel together according to the diagram in a book and making sure it’s approximately circular. Wheelbuilding is a precision skill, and relies heavily on the eyes, ears and hands of the wheelbuilder. You spend dizzying hours focussing on the millimetre of space between the truing stand and the rim, spinning the wheel again and again to find the places where a two-millimetre gap indicates that a couple of spokes need to be tightened or loosened in order to bring it into true. You pluck the spokes one after the other like the strings of a harp, trying to gauge their tension by their pitch, and to work out whether a particular kink in the wheel is caused by a rogue loose spoke, which will sound like a tenor to the other spokes’ castrato.

And when my tutor checked the finished wheel over to make sure I’d got it right, she inspected it as much with her hands as with her eyes, squeezing and flexing it all over to make sure it felt like a good wheel. And you won’t know what a good wheel feels like until you’ve built dozens of them, and the knowledge has sunk into your mind via your hands. It won’t get there any other way – you can’t just read all the books on wheelbuilding and consider yourself an expert. 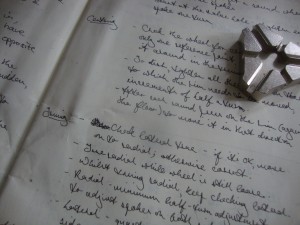 Needless to say, these being the first wheels I’ve built, I do not have this physical knowledge, and although my body will be able to sense the moment one of them goes out of true, it will not be able to spoke-key them back into shape relying on pure instinct. Instead I’ll be heavily dependent on a couple of scrawled pages of notes, a few half-remembered tips and tricks from someone who knows better, and whatever truing stand I’m able to improvise from bicycle, tent poles and gaffer tape.

But at least now I have some inkling of what I’m doing, which was the whole point of this exercise. Now, if I break a spoke in the middle of nowhere, I’ll be able to replace it, if one of the wheels buckles I’ll be able to straighten it, and when I finally wear through my great big thick double-walled Rigida rims, I’ll be able to cut them off the hubs and lace up a new pair. And maybe eventually I’ll develop the sixth sense of the consummate wheelbuilder. But for now, I’ll stick to my notes.

Previous Article Planning and waiting
Next Article My greatest hypocrisy