I know this trip will force me to look at the world in new ways, and change my mind about lots of the things I’ve considered fundamental beliefs until now. But I didn’t think it would happen so soon. A month ago, I wrote:

I think I’ll always read real books, even though everyone tells me to get a Kindle, and I admit that it would probably lighten my load. I like the physicality of books. I like rummaging my way through them, breaking their spines, turning down their corners and scribbling in their margins. So many of my books have coffee stains that it looks deliberate. Often they’ll take me back to particular coffee shop tables in Cambridge, Delhi and New York. I weave my life into books, leaving bookmarks like clues in a treasure hunt – I love picking up a book after several years and rediscovering old train tickets and receipts and other odds and ends from a long-past, half-forgotten chapter of my life. I like the size and weight and texture of books. I like the way I remember a certain passage just as much by whether it appears recto or verso, or near the top, middle or bottom of the page, as by where in the text it occurs.

And today I took delivery of my new Kindle.

I didn’t want to get one, but so many people have argued in their favour that in the end I had to consider it. Even my mother, whom I’ve long considered the last of the Luddites, has spent months trying to talk me round. Lots of her friends have recently retired and gone off on the grown-up version of gap years, and most of them wouldn’t be without their Kindles. The other night I went to an Alan Hollinghurst reading and, eavesdropping on the conversation of a couple of fiftysomething novelists sitting behind me (I have no idea who they were), discovered that they all now do their reading via Kindle.

What really swung it for me was my friend Liz, who’s currently riding around France and Italy, with half-a-dozen guidebooks on her Kindle. But of course! Even if I do resolutely stick to dog-earred paperbacks, and spend half my time hunting down fellow travellers with whom to swap them, I really don’t fancy hauling a pannierful of Lonely Planets over the Alps.

And then my parents offered to buy me one, to make up for all the Christmas and birthday presents I’ll be missing over the next few years. (This also adds to the pressure to actually succeed, and not come home with my tail between my legs within six months.)

So here it is. 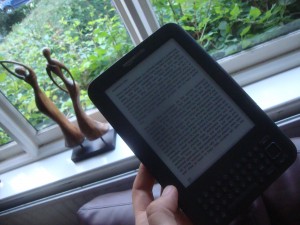 I’m prepared to give it a chance.

But you know the worst thing? With a Kindle, you can only buy books from Amazon. I hate Amazon.

One of my most firmly held beliefs, and one of the things I am most likely to lecture you on if I ever meet you, is that we should all buy all our books at full price from independent bookshops. Especially this one, where I worked as a teenager. And especially this one, the UK’s first and last lesbian and gay bookshop. Both of them have made an inestimable difference, both to the communities they serve, and to my own life and opinions. Without them, and without the writers whose books they stock, we would be much poorer as a culture, and I would be much more boring as a person.

So, although I don’t have all that much money, I’ve long refused to buy books from Amazon for 50p. It’s an insult to the authors who have spent months and years writing them (do you know how little authors actually make out of the books they publish?), and it’s taking business away from real people, who try to scratch a living by selling books, and giving it to a multinational conglomerate that doesn’t need it. I’ll happily spend £8.99 on a book. I think it’s worth it. It’s cheaper than a cinema ticket, after all. And it’ll last longer.

Amazon will deliver a book to you the day after you order it. Well, you know what? Most bookshops can have a book in stock the next day too, if it’s in print, and they’re usually nice places to visit, with interesting people to talk to, and more books to browse. It’s the perfect opportunity to leave your desk, and remind yourself that the physical world still exists, have a conversation, and head back home with a present for yourself in a brown paper bag, and the smug sensation of having boosted your karma by a few points.

Unfortunately, over the next few years, my bookshop karma is going to go a long way into the red.

So please – read this article by Philip Hensher, and then go and buy a book from Gay’s the Word. (You don’t have to be gay to go in there.) Or from the Great Oak Bookshop. Or from Treadwells. Or from Tales on Moon Lane. Or any of the other wonderful independent bookshops in London or wherever it is you live. And give them my love.

Previous Article Wheelbuilding
Next Article The luxury of self-pity