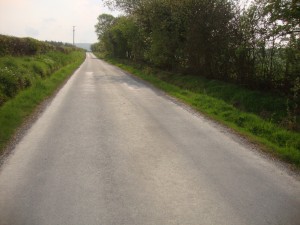 Isn’t it a beautiful sight? And something of a consolation for all I’ll be giving up.

Over the last couple of months I’ve been miserably preoccupied with the prospect of dismantling my life here, in its entirety, saying goodbye to all my family and friends, probably forever in some cases, and facing up to four or five years in which I’ll effectively be homeless and unemployed. And probably very lonely.

But when I ask myself why I’m doing this in the first place, I find there are always silver linings to console myself with. And last week, on holiday in Wales, I was reminded of one very powerful one.

I spent a sunny Saturday reacquainting myself with the flawless and mostly undiscovered tarmac of the Montgomeryshire hills. It must be some of the best road cycling terrain in the country, and yet no one seems to know about it. In sixty miles I passed only five roadies – just imagine how much carbon and lycra you’d be subjected to in the Home Counties on a sunny weekend in May. 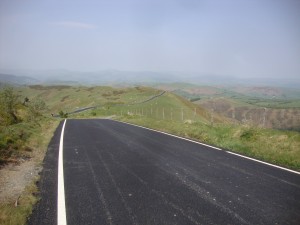 I’ve been trying to work out what it is about these roads that stirs me so much. Partly, of course, it’s the absence of potholes, taxis, buses and traffic lights. And of course, I’ll be facing lots of those on my travels too, and some of them will be far worse than anything I’ve experienced in London. I’m still excited.

I keep wanting to talk about the freedom offered by an open road and a distant horizon, but I’m wary of over-romanticizing it. (Perhaps too wary – after all, I do seem to be dwelling far more on the challenges and discomforts of this trip than on its high points, in an attempt to be realistic.) And I try to rein in my belief that I’m ‘getting away from it all’, because I’m really not. After all, whether I’m using the road as a commuter on the bus, as a pseudo-rebellious cycle courier or as an intrepid explorer, it’s still part of civilization – as is the bicycle I’m riding on. I’m not going to escape the all-pervasive influence of humanity by riding along a man-made road. If I really wanted to get away from it all I should probably take off all my clothes and go and starve to death in the wilderness, and what would be the point of that? 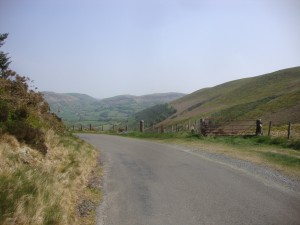 But I think that the road – like the bicycle – is the perfect compromise between civilization and the wild, or whatever it is we’re to call it. A 100-mile stretch of smooth tarmac is technology at its best. A lot of design and labour and science have gone into creating it, but not so much that we lose sight of its ultimate, very simple purpose, which is to get us from one place to another; to enable us to move. Compare this to the massive, overpriced 4×4 vehicles in which many people will drive along it, paying only half their attention to where they’re going as they try to programme the GPS and remember which button turns on the seat heater. A lot of technology’s gone into them too. A lot more than is actually needed.

And maybe that’s what freedom’s all about. Not letting go of everything, but letting go of everything that isn’t needed. As I type this I’m listening to Janis Joplin, who sang that “freedom is just another word for nothing left to lose.” I’ve always thought of this as a fairly doleful sentiment, but all of a sudden it strikes me as optimistic. Freedom is what you have when you’ve cut away all the pointless gadgets and accoutrements that tie you up and slow you down. All the things that you’re scared of losing – until you get rid of them, and then realize that you never needed them anyway.

[This was originally written just after the Easter bank Holiday, and forgotten about until now.]

Previous Article The Fear
Next Article Planning and waiting